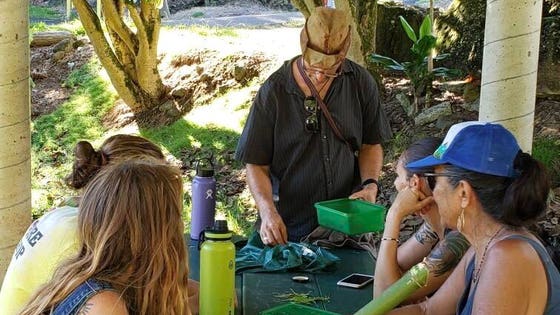 A group of chefs, foodies and outdoorsy types spray themselves with sunscreen and bug spray at the Hawaiʻi Nature Center on a sunny Sunday afternoon on Oʻahu. They are not just here to hike. They are here to find food.

Standing at the base of Mount Tantalus in Makiki Valley, they are about to indulge in a salad bar of wild, edible plants on a foraging tour with wild foods expert Nat Bletter.

Bletter highlights how much more nutrient-dense wild ingredients are than the heavily processed, often chemical-laden industrial food that floods our supermarkets.

“I want people to know all of the things that you can eat, probably just in your backyard or down the street, that is probably a lot more nutritious for you than the stuff you get in the store,” he said.

A little goes a long way too, Bletter points out. For example, a few handfuls of gotu kola from the forest offer an equal amount of nutrients as an entire head of organic lettuce.

“And you’re getting exercise while you’re foraging instead of driving in a car to the mall to do your shopping,” he said. “And you can often help the ecosystem too.”

The islands’ lush tropical foliage is not only pretty, but also useful, he said. If more people learned how to forage, then Hawaiʻi could depend less on exports from the mainland.

Bletter’s monthly foraging tour, a collaboration with Slow Food Oʻahu, teaches guests how to identify and to eat wild plants safely. He especially encourages them to consume invasive plants to support biodiversity and sustainability.

Becoming a foraging expert would have seemed far-fetched for Bletter, a city kid born and raised in Manhattan.

“I blame my grandma in Germany,” Bletter joked. “She had this amazing fruit orchard in the country, and I used to go visit her in the summers.”

He used to get so full from gorging on fruits such as cherries, plums and Japanese raspberries all day that he could not eat dinner at night. A deep love and curiosity for fruit emerged.

Bletter’s Taiwanese girlfriend introduced him to foraging during college at Stanford University when she pointed out all the fruit that was growing on campus, such as pomegranates, citrus and loquats.

“It was pretty lush,” he said. “The whole Silicon Valley used to be cherry and apricot orchards.”

His girlfriend showed him more tropical fruit, such as mangosteen, rambutan and mountain apples, during a trip to Taiwan and Thailand. She then gifted him his first foraging guide, by Steve “Wildman” Brill. Bletter started spending his lunch breaks bicycling around Silicon Valley with the guide to search for fruit and other edibles.

“I’d find people with fig trees just dripping on the ground,” he said, “and I’m like, ‘Hey, do you mind if I collect some of these?’ And they’d go: ‘Oh, no. I don’t know what the hell that is. It’s messing up the paint job on the car. Take as much as you want.’”

Bletter particularly enjoyed searching for pineapple guava – a green, egg-shaped guava that smells and tastes like a pineapple.

“Everyone has them as a hedge in the Bay Area, and no one seems to know that they are edible,” he said. “And not only the fruit are amazingly delicious, but the flowers are the best-tasting flowers I’ve ever had. They taste like candied violets. They’re super sweet and succulent.”

Bletter started leading foraging tours for his friends around the Bay Area. He also began studying herbal medicine, traveling for five months through Bali, Thailand, India and Nepal to learn about the healing benefits of plants.

He returned to New York to earn a Ph.D. in ethnobotany. Throughout grad school, he led foraging tours through Central Park, where he sourced 50 percent of his food during the summertime. His studies also took him to Mali, Guatemala and Peru for eight months to examine how different cultures used similar plants to treat infectious and autoimmune diseases.

“If someone in Peru and Mali were using neem or mugwort to treat malaria, there’s a good chance that it actually has something really effective in it because it’s two cultures that never talk to each other,” he said.

Bletter’s postdoctoral research then beckoned him to Thailand, Laos and, ultimately, Oʻahu. His love for cacao flourished while doing research and teaching ethnobotany upstairs from a cacao expert at the University of Hawaiʻi. Bletter co-founded the bean-to-bar company Madre Chocolate and committed to calling Oʻahu his new home.

“I had contemplated going into academia, but I had a lot more fun with the chocolate,” he said.

Bletter uses as many locally foraged ingredients as possible in his chocolates, such as plumeria, strawberry guava and allspice.

He has been sharing his passion for foraging through these tours on Oʻahu for five years now.

Bletter starts his tour with identifying plants. He recommends a couple of foraging guides to get you started: “Peterson Field Guides: Edible Wild Plants” by Lee Allen Peterson and “A Hiker’s Guide to Trailside Plants in Hawaiʻi” by John B. Hall.

He teaches you how to identify the kind of forest you are in – wet, mesic or alpine, for example – and the different plant classifications, such as trees, herbs, shrubs and ferns.

He then explains various ways to identify each plant: comparing it with images or drawings with salient details, checking the arrangement of its leaves, or looking for milky sap oozing from them.

Bletter also advises how and in what stage to eat the plants that you find on the tour. He suggests obtaining recipes and other tips from the book “Wild Food Plants of Hawaiʻi” by Sunny Savage and the app that she is launching next year called Savage Kitchen.

Bletter addresses plant toxicity too. He warns guests to not put anything into their mouths until he deems it to be safe and that some plants can be eaten only if you cook them a certain way.

For example, ackee, a plant in the lychee family that tastes like boiled eggs, is neurodegenerative if eaten too young or uncooked and will kill you.

Rat lungworm disease is one concern in Hawaiʻi. High-hanging fruit is typically safe to eat, Bletter explains. It is the low-hanging, nonaromatic greens that you want to watch out for. Look for trails and bite marks on the leaves from the snails and slugs that carry this disease. Wash the greens well in vinegar to loosen these critters from the leaves so that you do not accidentally ingest them, an act that can leave you temporarily paralyzed.

Bletter also covers environmental toxins during the tour. Fruit absorbs the least amount of toxins from the environment because it is the youngest, he said. Next are the leaves, which have been around for a year or so. Then, the bark, which has been around for a few years. And finally, the roots, which he does not advise eating if they live near roads that could have exposed them to gasoline.

Invasive plants overrun other plant species, including native plants, which can negatively affect the health of the soil and wildlife around them.

Harvesting the abundance of invasive plants in Hawaiʻi could make it less dependent on imports from the mainland too.

“The pink peppercorn when you get it in the store in the little, like, multicolored peppercorn mixes, that’s about $300 a pound, I calculated,” he said, “and it’s coming from an island in the Indian Ocean, getting shipped to Europe, then to the mainland, then to Hawaiʻi, when it’s growing for free in our backyard and it’s invasive.”

“It’s super invasive, so we call bars like that Eat The Enemy ’cause you’re getting rid of an invasive plant,” he said.

At the end of the hike, Bletter washes the greens that the group has spent all morning foraging – a blend of hyacinth bean greens, namul, Turk’s cap, amaranth and Oriental false hawksbeard – and tosses them with a homemade dressing of chocolate-balsamic vinegar, miso, ginger, honey and za’atar. Using chopsticks, everyone takes a bite and a moment to appreciate what the land has provided.

“I want people to appreciate their environment a lot more,” Bletter said.

To join Bletter for a foraging excursion the next time that you are on Oʻahu, visit slowfoodoahu.org.