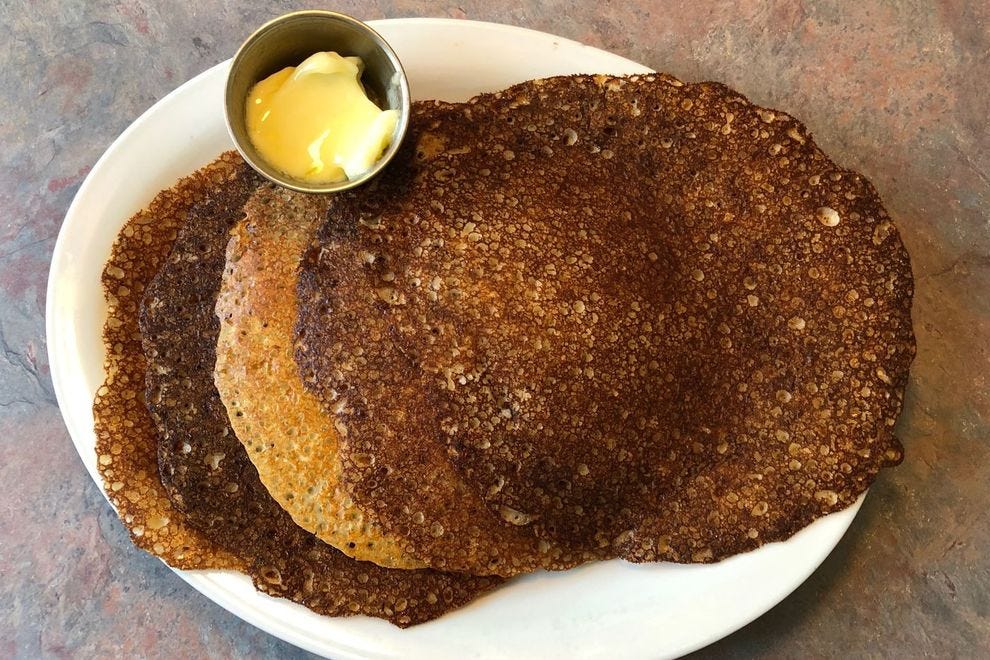 Rhode Island, although the smallest state, has an overabundance of local food oddities, from coffee milk and Del’s lemonade to clear chowder and a perhaps slightly unnatural obsession with donuts.

None, however, have the provenance of jonnycakes, whose recipe predates recorded history and was passed down to Rhode Island’s first colonists by the Narragansett tribe.

“They were used for survival, but they have maintained their place in Rhode Island because they are delicious,” says Ben Drumm, co-owner of Kenyon’s Grist Mill in Usquepaug, Rhode Island. The mill has ground the cornmeal used in jonnycakes and another traditional regional dish, Indian pudding, since 1886.

At once familiar and unique, the jonnycake is hard to describe. If a pancake and polenta had a baby, perhaps that would be a jonnycake. Cooked on a griddle and served for breakfast, usually with butter and syrup on the side, the jonnycake certainly could be mistaken as the weird stepsister of the pancake. The dominant flavor is of corn, sweet enough that many locals eat them with butter only.

“They’re more like cornbread, and grittier than pancakes,” says Karie Myers, owner and chef at Jigger’s Diner in East Greenwich, Rhode Island, where jonnycakes and Myers’ homemade hash compete as the most popular items on the menu.

Never call them pancakes or cornbread, though. In fact, don’t even call them johnnycakes, because Rhode Island’s quirky take on the ancient take-out food known as “journey cakes” are never spelled with an “h.”

The corn is notoriously stingy and difficult to work with: each cornstalk yields but one ear, and the tough kernels (it’s called “flint” for a reason) resist grinding, even when crushed between stone mill wheels weighing several tons each. The white corn also must be grown far from other cornfields because it’s highly vulnerable to cross-pollination.

Kenyon’s Grist Mill in Usquepaug, Rhode Island and Gray’s Grist Mill in Westport, Massachusetts produce most of the jonnycake meal used by the local restaurants that still serve this traditional breakfast staple, including Jigger’s, Mae’s Place in North Kingstown, J.P. Spoonem’s in Cranston and the Commons Lunch in Little Compton.

Kenyon’s grinds about 20 tons of cornmeal annually, although they’ve had to turn to out-of-state farmers for their flint corn since most local farmers have switched over to growing more lucrative sweet or dent corn. “We’ve been trying to find some locally desperately,” says Ben, who says that the mill only uses corn that is organically raised, raising the bar even higher for suppliers.

For a dish that’s been around for several centuries, there’s a surprising amount of variance when it comes to making “classic” jonnycakes. The Narragansetts didn’t write their recipe down, and while the Culinary Archives at Providence’s Johnson & Wales University – one of the top culinary schools in the country – contain at least 30 books on jonnycakes, including some from the 17th century, a jonnycake on the west side of Narragansett Bay can be pretty different from one plated at an East Bay diner.

Drumm calls producing jonnycake meal “a labor of love,” and the same can be said for the somewhat laborious process of cooking jonnycakes. Water must be maintained at a constant boil and added slowly to properly cook the cornmeal to the correct consistency, which Jiggers’ Myers describes as an hour-long process. “It takes a long time, which is why a lot of places don’t do it,” she says.

Once on the griddle, the jonnycakes must cook for at least 10 minutes on each side, unlike flour pancakes which can be done in a minute or two. “If you cook them less than that, they fall apart,” says Myers.

Cooking a proper jonnycake took a lot of trial and error even for chef Luminita Cirstea, an instructor at Johnson & Wales’ College of Culinary Arts. She has experimented with jonnycakes with an eye on making them a homework assignment for her baking and pastry students. “It takes a lot of practice, like playing an instrument,” she laughs.

Jonnycakes may be old-fashioned, but they’re not going out of style. Cirstea, who categorizes jonnycakes as a type of flatbread, says they can be used as a foundation for sweet or savory dishes in place of polenta, for example. And Drumm has seen chefs mix pumpkin into the batter and top jonnycakes with warm chocolate.

Myers, who is selling more jonnycakes than ever at her vintage, chrome-clad diner on East Greenwich’s Main Street, serves jonnycakes eggs Benedict topped with sausage patties as well as the unadorned variety.

“A lot of customers want to try items on the menu that are more unique,” she says. “Jonnycakes have been around for a very long time, and we take the extra time to do them because a lot of places don’t anymore, so it’s kind of a niche for us.”