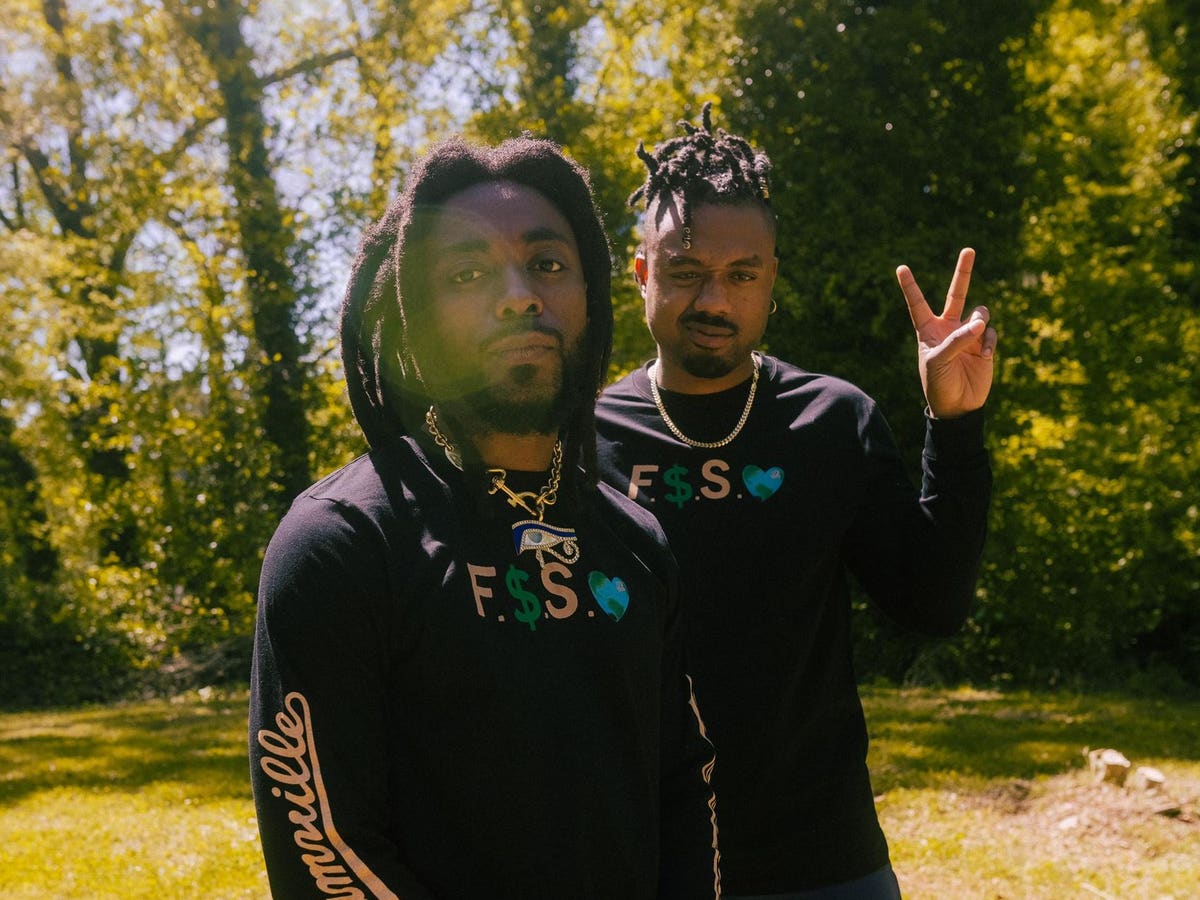 “As millennials, we’re told about the many problems that we were born into,” says WowGr8, as Olu nods in agreement. “Naturally as you get older you’re gonna see how much you can repair.”

From investing in a community initiatives, to collaborating with former First Lady Michelle Obama in the “When We All Vote” movement, to participating in Music Climate Revolution by reducing the carbon footprint of their performances— and as one of a handful of musical guests who were selected to perform at the 2021 United Nations’ World Oceans Day Event— Earthgang is devoted to giving back to the community and the planet, while spreading their message of hope and love.

Imbued with the uniquely soulful flavor of the South, Earthgang’s eclectic style and fearless lyrics point a finger at environmental injustice and look social inequality directly in the eye.

“The goal of our music is to spread our message to communities that would not otherwise have had certain discussions,” says WowGr8. “Some of the themes that we cover in our songs people know and acknowledge and feel every day, but the discussion isn’t always there as it should be.”

And the Platinum-selling duo knows first hand what they are talking about.

“We’re from the hood,” says Olu of the S.W.A.T.S. (“Southwest Atlanta, too strong”) area where they grew up. “When I saw nature, it was either at a zoo or at a little neighborhood creek or on the Travel Channel.”

“I wasn’t allowed to go past a couple miles from our crib,” adds WowGr8. “But you definitely notice there are real differences once you start having interactions outside of your own environment.”

The realization that environmental inequality seemed to go hand-in-hand with social inequality began to creep up on the duo, as life took them beyond the invisible boundaries of their predominantly African American neighborhood.

“When I would go outside the hood, the first thing I would notice was that it was clean,” says Olu. “I would think to myself, it’s not that hard to keep things clean. There must be something else going on in my neighborhood than just a lack of cleanliness. And why are the street lights in this neighborhood always working at night and they aren’t in my community? That’s what got my mind going.”

Ultimately, international travel would provide Earthgang with their epiphany.

“The first time I traveled internationally, I went to the Cannes Film Festival in France… Designer brands were everywhere… there was so much wealth around me,” recalls Olu. “Then I went on the beach and saw men from Senegal selling merchandise like sunglasses for very little money in order to survive.

I began to realize that these inequalities were being driven through mass production; that most of the people who run these industries don’t look like me— but the people who work for them, and are living on pennies do.

It’s also these industries creating all of the environmental problems. Over-fishing, oil spills— they are all part of that system of mass production. That’s how I began to connect social inequality with environmental inequality.”

Olu and WowGr8 know from their own life experiences that mass consumerism does not benefit everybody. The inequality created by many large industries has social, economic and environmental impacts that are felt disproportionately by people of color.

On Earth Day, April 22, Earthgang brought progress to their own community of Southwest Atlanta in the ground breaking of a community garden at Jean Childs Young Middle School, where students had reported that food insecurity was one of their biggest barriers to success. The pair contributed $10,000 in seed funding and is currently raising a further $200,000 via crowd funding in order to grow and sustain the project.

“We got friends, cousins who go there. It’s part of our community, part of our side of town. There are food deserts and people don’t have the knowledge or learning to take care of themselves,” says WowGr8. “The community garden is being used in the curriculum of the school to teach the kids about sustainability and agriculture. It’s a wealth of knowledge to know how to grow food.”

In addition to boosting food security, the project has promoted a connection with nature that Olu and WowGr8 didn’t have as children, but which they consider to be vital. This is a message that they have sought to promote through their music.

I see the beauty in the little things | Hear the music when the wind blows | Turn these moments into memories | Don’t overthink it, keep it simple | Spread love like a miracle

Earthgang’s latest project, Ghetto Gods, explores the theme of elevation above circumstances through a connection with self and nature.

It is an introspective statement about looking within and giving back.

“It’s about finding God inside of you,” says Olu. “It doesn’t matter if you are from the ghetto or not. It’s about finding the light that has been buried and developing that so you can radiate it back to humanity and nature.”

“We all suffer as a planet,” explains the duo. “But we are all one. We are all Earthgang.”