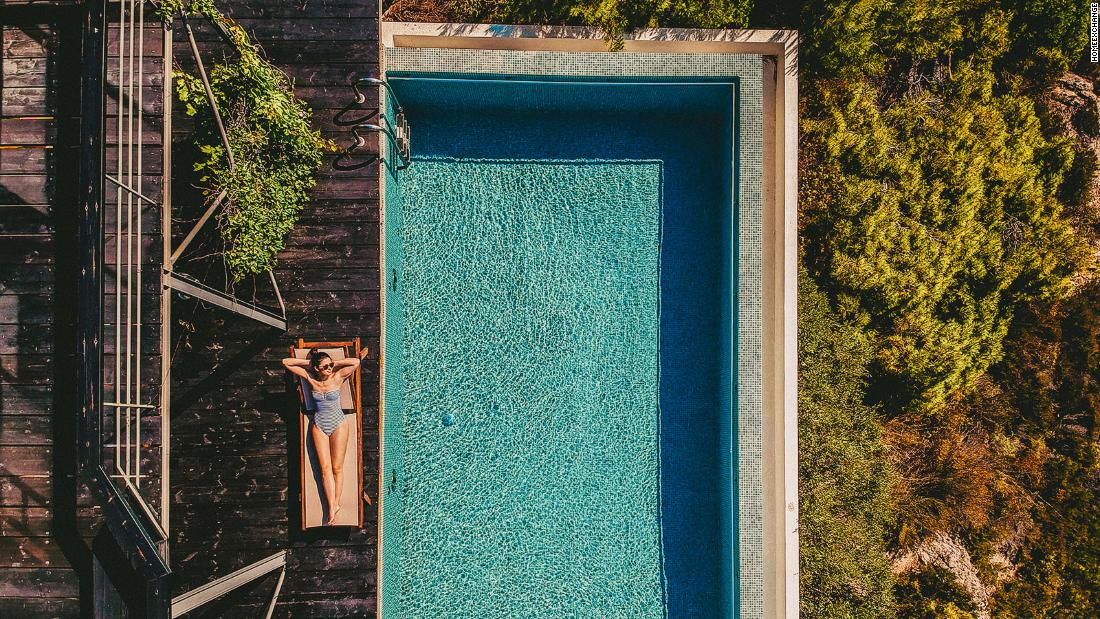 (CNN) — The concept of staying in another family’s home while they bed down in yours isn’t exactly new.

However, the ongoing travel restrictions and uncertainty brought about by the pandemic has led to a significant boom in this type of holiday.

UK-based company Love Home Swap reported a 282% increase in new customers signing up for free trials last year when compared with 2019, while rival company Holiday Swap saw a growth of 20%.
Home Exchange, a home swapping site with over 400,000 properties across 187 countries that allows users to list their property, has also noticed a rise in interest. In fact, the number of exchanges finalized on the platform last month was 3% higher than those organized in 2019.

Meanwhile, exchange-related conversations created by users were 49% up on June 6, 2021 when compared with the same day in 2019, according to a spokesperson for the online platform.

Jo Watkins, a freelance general practitioner and co-founder of digital membership platform The HOW People, has been home swapping for over a decade, along with her husband Dave and their four children.

“We did our first house swap back in 2010,” Watkins tells CNN Travel. “We were looking to go to Bowen Island in Canada, on the west coast of Vancouver Island, and I couldn’t find anywhere to rent that was suitable.”

After signing up to Home Exchange, which allows users to list their property, as well as search and contact owners before officially registering and paying the annual subscription cost, Watkins found a house available in their desired location.

“It was just super easy. Literally an exchange of emails, and we’d organized it,” she explains.

“We were staying in a house that would have cost us thousands. They left little presents out for us. It was just a lovely experience. And it made us want to do it again and again and again.”

Watkins soon became “hooked” on home swapping, but came to realize that not every swap would be quite so straightforward as that very first one.

“There’s a little bit more luck involved and a lot more organizing and compromising,” she explains. “Because what works for one family might not work for another.”

Mark Kureishy, his wife Kerstin and their three children are among the many families that the Watkins have swapped with over the years.

“I think it’s a really, really interesting concept,” says Kureishy, who lives in Didsbury, a suburb of the northern English city of Manchester.

“It could have happened pre-internet, but you wouldn’t be able to move as quickly as you do now. The technology has enabled this and made it much more convenient.”

Although they’ve done countless home swaps, including a house on the beach in Los Angeles and a lavish home in Rio de Janeiro, the Kureishys are very fond of the Watkins’ holiday home in Tresaith, West Wales and have returned at least 10 times over the years.

The two families were brought together through the Love Home Swap platform, where members can swap houses with someone else or lend their home out in exchange for points to be redeemed at a later stage.

The Watkins managed to build up a large bank of points by offering up their holiday home, which sleeps 14, when they weren’t using it.

They’ve subsequently stayed in houses as far afield as Sri Lanka, Australia, New Zealand and the west coast of America and Canada through the points they’ve accumulated, as well as doing direct home swaps.

Homeswapping site Home Exchange says its noticed an increase in house exchanges since the pandemic.

“We basically did a trip that we would never have been able to do otherwise, as a result of house swapping,” says Watkins.

“It just wasn’t even a possibility. I’m not sure I could put a price on how much we’ve saved.”

Celia Pronto, Love Home Swap’s managing director, suggests that it’s the lure of staying somewhere for free — although families will have to stump up for running costs, as well as an annual subscription fee to at least one home swapping site — that’s attracting up new home swappers.

“We believe that home swapping is becoming increasingly popular as it has many benefits over a ‘traditional’ holiday,” Pronto tells CNN Travel.

“First of all, it is extremely cost-effective — the price of a one year membership is frequently what you would pay for one night in a hotel, but you can travel as much as you like to wherever you’d like to around the world without worrying about accommodation costs.

While Watkins and her family have had nothing but good experiences through home swapping, she accepts that it’s not for everyone, and requires a lot of flexibility as well as good organization skills.

She’s recommended home swapping to most of her friends and acted as the “middle man” for several stays, but there’s one important question Watkins tends to ask first.

“If you’re wondering whether you can home swap, the essential question is ‘Do you mind the idea of somebody else sleeping in your bed?'” she explains.

“I think if the answer to that is, ‘Oh, my God, I could never do that.’ Just don’t think about it anymore. Because you will have strangers sleeping in your bed.”

“The hardest thing is doing it for the first time and feeling like somebody is going to come in and judge you.”

Although the Kureishys’ friends have admitted to being envious of the wonderful experiences they’ve had through home swapping, few have decided to take it up.

“I think you have to like meeting people,” he says. “There are some people who it wouldn’t suit because they want to go away on holiday and be left alone.

“You have to enter into it with a degree of openness. You can’t be uptight about it. Some of our friends have said that they would like to be able to do it, but they don’t think they could.

“Others have said flat out. ‘Well, I just wouldn’t want anyone in my house.'”

Of course, home swapping involves a lot more than just handing over your keys to another family and heading over to their place.

There’s a fair bit of work involved in before, during, and sometimes after, a swap.

Watkins says she usually has her house professionally cleaned and arranges for a local company to collect dirty sheets and return them once clean.

She also has a special cupboard that’s used to lock away items like computers or unnecessary clutter in order to make sure that guests have as much space as possible.

While Kureishy has an office that he planned to use in a similar way, he says he and his family have become so relaxed about home swapping that they rarely need it.

Both families have an information pack at the ready for those who stay in their home, which lists things like favorite walks, local takeaways, and coffee shops, as well as local hospitals.

The wealth of local knowledge that comes from staying in a lived-in home as opposed to a hotel suite plays a big part in the draw of home swapping for the Kureishy, a former flight attendant who says he’s stayed in enough hotels to last a lifetime.

“It’s always better to receive all of the local information that way than it is to get it from a travel guide or TripAdvisor,” says Kureishy. “We much prefer that.”

Pronto shares this sentiment, pointing out that home swaps offer “genuine insights” into the local culture “because you become a neighbor, and frequently a friend, rather than being a mere hotel guest.”

“We see home swapping as a great option for those looking for more control over their surroundings, who may feel anxious about staying in hotels, particularly at the moment,” she adds.

It was realizing just how attractive their idyllic home could be to holidaymakers that initially convinced Kureishy and his wife to take the plunge.

“We realized we had a place that people wanted to stay in,” he explains. “We have a nice big house that’s perfectly placed for those who want to come to Manchester, but don’t want to stay in the city center.”

This was certainly the attraction for Watkins, who has relatives that live very close to the Kureishy family’s five-bedroom home.

“It’s a lovely area,” she says. “And for us to go up to Didsbury where they live and be based in their house means that we can see friends and family.”

“They live in a city and we live by the beach, but actually the swap works because we all want different things.”

The Watkins family have made friends all of the world thanks to their homeswapping trips.

While both families have quite large homes, Watkins says she and her family have stayed in a huge range of houses, from tiny cottages to enormous houses

“So many people say, ‘Well, no one would want to stay in our house.’ Size doesn’t matter. But it needs to be tidy. Not empty, just clean.”

Although Kureishy was an early adopter of home swapping, much like Watkins, he believes more people are now choosing this type of vacation due to ongoing travel restrictions and the rising cost of domestic holidays.

“The pandemic probably has sped it up a little bit,” he says.

However, there’s no denying that home swapping does have its drawbacks. Things can go wrong occasionally.

According to Watkins, broken glasses are part and parcel of the experience, while guests once broke their television.

Meanwhile, the Kureishys former neighbors weren’t so keen on their home swapping hobby, and sometimes complained about the noise other families made when they came to stay.

However, neither family has had any serious incidents so far.

“I think the benefits of it far outweigh any disadvantages,” adds Kureishy. “And most of the perceived disadvantages to this are just perceptions that in all probability, will never arise.

“Like somebody stealing or breaking something, or damaging the house in any way through careless abandonment as opposed to anything more sinister.”

Watkins is of the same opinion, stressing that “most people are absolutely lovely.”

“People want to help and they want you to have a nice time in their place,” she adds.

Both say they’ve made friends all over the world as a result of their home swapping jaunts, including each other.

“We’ve made several friends in Australia and New Zealand,” says Watkins. “We just really clicked with several families that were there.

While travel restrictions mean their international home swapping opportunities are limited at present, Watkins is already making plans for a big family trip, and admits she gets FOMO if she stays off her favorite home swapping sites for too long.

“Our plan is to do a big trip around Central America,”she says. “A lot of Americans have houses there that they swap regularly.”

Meanwhile, the Kureishys are looking forward to yet another stay at the Watkins’ holiday home in West Wales later this month.