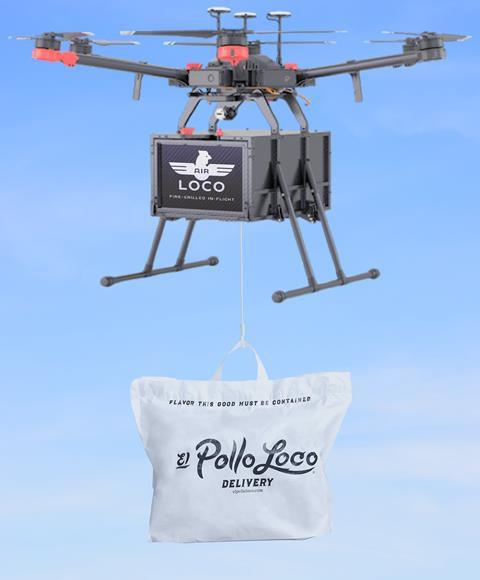 El Pollo Loco is partnering with Tel Aviv-based drone startup Flytrex for the test, which will start in Southern California. During the pilot, a select number of the chain’s Loco Rewards members in that market will be surprised with one of the first deliveries from what is being called the “Air Loco” drone.

The drone is outfitted with a fastened delivery box to keep orders intact, while the food itself is served in El Pollo Loco’s new Thermo-to-Go packaging. Orders are lowered by a wire release mechanism from 80 feet.

This test, and its potential to roll out at a nearly 500-unit chain, should quickly amplify the conversation about drone delivery in general.

The restaurant space hasn’t been as quick on the draw, though there are a few examples of early movers and potential early movers. On Flytrex’s app, Starbucks
orders are available in Fayetteville, North Carolina, for example. Kitchen United just signed a licensing deal to bring UK-based Camile Thai to the U.S. and that brand was the first of its kind to facilitate hot food drone delivery in Europe, which now presents a domestic opportunity.

And all the way back in 2019, Uber Eats started testing drone delivery in San Diego with McDonald’s
.

With FAA regulations clearing at a swifter pace, broader rollout could likely come sooner than later as plenty of drone delivery companies test the waters in the U.S.

No doubt the proliferation of drones is not a question of if, but when as operators sprint toward more efficient delivery models.

A major draw with drones is speed of service and, according to the company, drone deliveries take a fraction of the time it would take for conventional delivery to arrive. Flytrex drones are automated to fly at 32 mph and are able to circumvent traffic patterns and lights.

There’s also the cost piece. Many third-party delivery aggregates charge 15% to 30% in fees and most of those go toward labor. Several chains have raised their delivery-specific orders to lessen the blow of these fees. Automated drones require significantly less labor to function.

“For our system, a single human can make a lot more deliveries flying the drone than with a car or bike,” Flytrex CEO Yariv Bash said in 2019.

In a 2019 article on Path to Purchase IQ, Sterling Hawkins, co-founder of the Center for Advancing Retail and Technology, estimated that automated delivery could reduce delivery costs by 80% to 90%.

Speed and cost will likely be top of mind for El Pollo Loco through this test, which comes as the chain experienced a record-breaking 250% increase in delivery in 2020.

“El Pollo Loco continues to explore new and innovative delivery services that offer our customers added quality and convenience, and the Air Loco drone delivery pilot program is our latest effort to unlock fresh options for getting our fire-grilled chicken to hungry customers everywhere—piping hot and in perfect condition,” El Pollo Loco VP of Digital Andy Rebhun said in a statement. “We want to offer drone food deliveries that are fast, convenient and safe. The insights gleaned during this test-and-learn pilot will play a crucial role in helping us shape this exciting new service ahead of its rollout.”