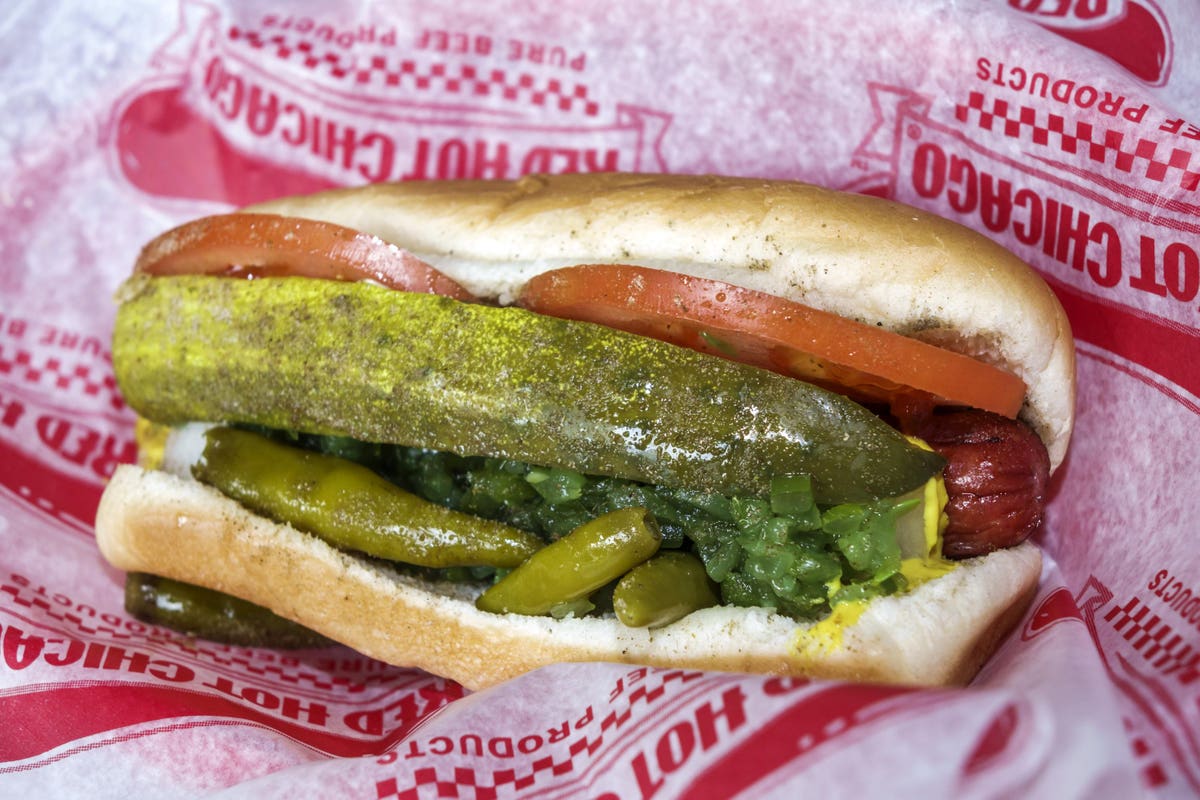 It’s National Hot Dog Day! Once a year the nation gets together to celebrate the many variations of sausage in a bun. Hot dogs became popular in the U.S. in the early 20th century, perhaps nowhere more so than in Chicago, where Chicago-style hot dogs are as much a symbol of the city as the Bean.

This National Hot Dog Day, let’s take a look at the history of the city’s favorite street food, what makes a Chicago dog a Chicago dog, and where to find some of the best.

Where It All Began

Chicagoans can thank Germans for bringing hot dogs to America. At the end of the 19th century, 25% of Chicago’s population was German-born or first generation German, and in 1880 36% of ALL butchers in Chicago were German immigrants. They brought their food culture with them, particularly the Vienna sausage–at the time a mix of pork, beef and spices.

This worked well in Chicago, which was the meatpacking capital of the world and a leader in the industrial food market. David Berg, the city’s oldest hot dog brand, was founded in 1860 once steam-powered choppers enabled factories to turn meat trimmings into hot dogs.

The hot dog was cheap, delicious, and could be topped with “nutrients” in the form of condiments, which helped it take hold during the Great Depression. Fluky’s (no longer in business) sold the first “Depression Sandwich,” featuring mustard, pickle relish, onions, a dill pickle, hot peppers, lettuce and tomatoes in 1929. It cost a nickel.

Post-Depression, the hot dog stuck. Chicago was a working class city, and the Chicago dog was an affordable, working class food. World War II veterans returned home and found opening a hot dog stand in the newly expanding suburbs was a great business opportunity. Soon, every neighborhood had a hot dog stand or two, many of which still exist today.

So, what exactly is a Chicago-style hot dog?

Hot dogs arrived in America in the late 1800s, but Jewish immigrants created the all-beef version in the early 1900s. This style became popular even in non-Jewish communities because Chicago’s Union Stockyards had a terrible reputation for health standards, and kosher standards were considered safer and cleaner.

Enter, Vienna Beef. The brand synonymous with Chicago-style hot dogs today was launched in 1893 ahead of the Columbian Exposition. Samuel Ladany and Emil Reichl, two Jewish immigrants from Austria-Hungary, started selling their all-beef, spiced dogs from a stand during the fair and used the proceeds to open Vienna Beef. The family-owned company is now on its fourth generation and still uses the original recipe.

If you’re eating a hot dog in Chicago, chances are you’re eating Vienna Beef. The company has a 71% market share in the city. Hot dog companies are very regional, so it’s unlikely to see Vienna Beef in New York, where Nathan’s Famous or Sabrett’s is more common. (Shake Shack does use Vienna Beef though, don’t tell New Yorkers).

About 75% of meat in a Vienna Beef hot dog comes from lean, older cattle, while the other 25% is trimmings from the company’s corned beef and pastrami. It’s emulsified into a slurry, then spiced with garlic, salt, pepper, paprika, and other secret flavors Vienna Beef won’t give up. The meat is put in a casing, which gives the dogs a snap when you bite. Finally, they’re smoked low and slow for about four hours to get their signature red color.

Once Vienna Beef ships the dogs off to restaurants, they can be steamed or charred. “Never boil a hot dog,” says Fred Markoff, a sales representative for Vienna Beef and former Chicago hot dog restaurant owner.

Hot dogs are precooked and can be eaten cold. Steaming for about 15 minutes heats them up and grilling gives them a nice charred flavor, but boiling makes them tough.

“A true good snap dog sits in water for 15-20 minutes, and when you bite it the juices explode in your mouth,” says Jim Locaciato, sales director for Vienna Beef.

True Chicago-style hot dogs come in a Rosen’s bun. Sam Rosen was a Polish immigrant who moved to Germany to learn to bake, then opened a bakery in New York and eventually Chicago. He opened his Chicago shop in 1909 and soon after created the poppy-seed bun, a perfect companion to the hot dog.

Alpha Baking Co., which today owns S. Rosen, says the poppy seeds add a “nutty, earthy flavor” to the bun, which complements the hot dog. Vendors say they use Rosen’s buns because they’re easy to bite into.

“Look how soft it is,” says Scott Floersheimer, owner of hot dog restaurant Fatso’s Last Stand, compressing one in his fist, “it just squishes down to nothing.”

Buns must be properly steamed so they’re not mushy, but not tough. Toasting is a sin.

The Toppings – “Drag It Through the Garden”

The “garden” on top of Chicago dogs is the product of a friendly rivalry between Chicago’s Greek and Italian street vendors. They would post up at Maxwell St. Market, where there were plenty of vegetable stands, and one-up each other with experimental toppings.

Then, the stock market crashed in 1929 and hot dog toppings went from a fun game to a necessity for feeding families on the cheap. Hot dogs themselves rose in prices, so vendors like Fluky’s started heaping vegetables atop the dogs to create a more filling meal. There were surely dozens of combinations created depending on what was available at the time, but somehow, seven stuck. They are:

Fun fact: Chicago and New Orleans consume more sport peppers than any other U.S. city. New Orleans for the muffalata, Chicago for hot dogs and giardiniera.

Yellow Mustard–An original topping going back to the first German immigrants that still provides texture and a hint of spice. Don’t get fancy with dijon or stone ground. Yellow all the way.

Pickle–It’s all about the brine. Pickles were one of the first hot dog condiments, but not for taste. Vendors threw hot dogs in vats of pickles to preserve them back in the day before mass refrigeration.

Neon Green Relish–The relish provides sweetness and is typically bright, almost fluorescent green. If that sounds unnatural it’s because it is. “It was done for photography’s sake,” said Locaciato. Old fashioned photos didn’t display color well, and the relish looked brown and unappealing. “The relish was ugly,” he says, “so they [Vienna Beef] dyed it.” Now, it’s iconic. Locaciato says 30 years ago about 30% of the relish Vienna Beef sold was the bright green variety, but today that number is up to 80%.

Onion–Here for the crunch! And a touch of sweetness.

No Ketchup. Ever. It’s no secret that ketchup is forbidden on Chicago-style hot dogs. Even former President Barack Obama said it’s unacceptable for anyone over 8-years-old.

Why? “Because ketchup is sweet, and the relish provides that sweet instead,” says Locaciato. “You have hot, sweet, mild, and they all play against each other…ketchup will ruin it.”

Optimal Bite Ratio–Correct ingredients do not a perfect hot dog make. All seven must be portioned precisely to create what food reporter Steve Dolinsky calls “optimal bite ratio,” or “OBR.” A too-thin hot dog or too-thick pickle spear could throw the whole thing out of whack. Look for a size six or eight dog with thin pickle spears and tomato slices and a generous sprinkling of the other condiments.

Sides–Traditionally, Chicago dogs were sold from pushcarts and sides were not an option, so no pressure to fill up on fries. If you do though, go for hand-cut. Hand-cut fries are potatoes that are cut fresh on an angle, then blanched and fried. Floersheimer says it takes about five hours a day to cut and blanch the hand-cut fries at Fatso’s Last Stand, but the difference in flavor and texture is worth it when compared to frozen, machine-cut fries. The outsides get crisper while the insides remain soft. Look for fries that come with Merkts cheese sauce, a creamy, sharp cheddar sauce from Wisconsin.

If you want to get really old school, wash down your hot dog with a Green River soda. The Schoenhofen Edelweiss Brewing Company of Chicago started making the soda at its factory in the Pilsen neighborhood to survive prohibition. Post-prohibition, the lime soda with a hint of lemon became the thing to drink for kids in the 1950s and 1960s. It became so popular that Creedence Clearwater Revival wrote a song inspired by it.

Where to Eat Chicago dogs

Now that you know the why, what and how of Chicago dogs, where should you eat one? There are hundreds of hot dog stands around the city and suburbs, many of them very similar. Here are a few serving varied styles.

Charred: Fatso’s Last Stand serves an excellent charred hot dog. Cooks here cut each end of the dog like a cross and score it so it spirals. That helps char more surface area. “I personally think that everything tastes better a little charred,” says owner Floersheimer. He grew up in New York and is partial to mustard and sauerkraut, but we’ll give him a pass because his Chicago-style hot dogs are some of the best in the city.

Jr.’s Red Hots is another great char dog contender. In fact, Markoff of Vienna Beef, who has tasted thousands of hot dogs throughout his career, says the hot dogs here are his favorite. Go to Superdawg Drive-In for the hot dog, stay for the old-fashioned, kitschy cute vibe. Finally, if you can brave the harassment that’s custom at The Wiener’s Circle, you will be rewarded with a classic char dog that’s as good as it gets.

Steamed: Rand Red Hots, another Markoff favorite, is a classic. A steamed hot dog with all the toppings and that essential Rosen’s bun.

Depression Dog: Gene & Jude’s is an institution for the Depression Dog, a size ten dog with mustard, onions, sport peppers, relish (not the neon kind) and a pile of hand-cut fries on top.

For the Masses: Portillo’s is beloved by Chicagoans and likely soon much more of the country; it just announced plans to go public. Sure, the chain serves a massive menu with everything from salads to pastas to the Chocolate Cake Shake, but their classic Chicago-Style Hot Dog is reliable, delicious, and one of the easiest to get your hands on. There’s something to be said for that.

Is a hot dog a sandwich? Just kidding! That debate is for another time.