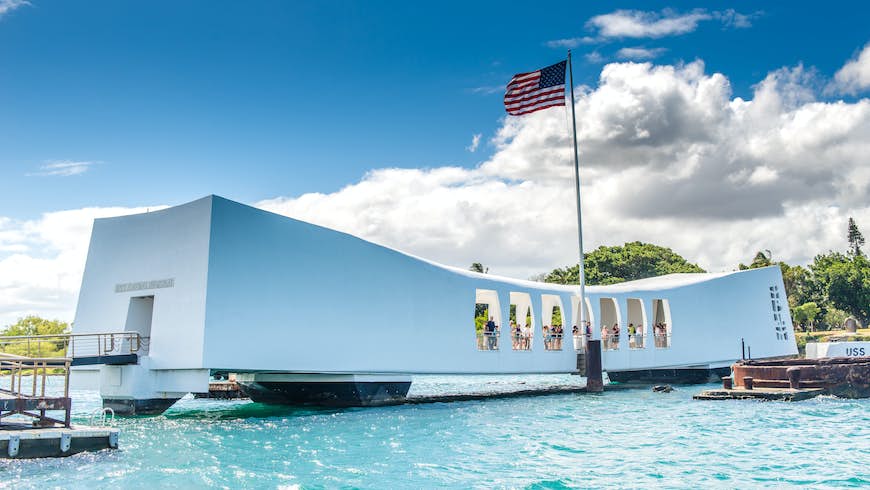 Nearly 30 years after The Armistice was officially declared, formally ending World War I, a veteran named Raymond Weeks suggested turning the relatively new national holiday dedicated to world peace into Veterans Day to honor all US service members. President Dwight D. Eisenhower, himself a World War II veteran and five-star general, officially signed the observance of Veterans Day on November 11 into law in 1954.

Veterans Day joined Memorial Day, established in 1868, and Armed Forces Day, first observed in 1950, as opportunities for Americans to honor the men and women who served in the Army, Navy, Air Force and National Guard. But you don’t have to wait for a national holiday to learn more about the contributions of veterans to US history – indeed, there are numerous museums, memorials, national parks and national cemeteries around the country dedicated to telling the story of the country’s military.

These are 11 cities from Philadelphia to Honolulu where you can engage with the history of military service members and thank veterans for their sacrifices.

The US Navy has had a significant presence in Hawaii for 200 hundred years, particularly on the island of Oʻahu where the Pearl Harbor naval base was developed in 1899. When the infamous Japanese attack on December 7, 1941 drew the United States into World War II, it cost 2403 US personnel their lives and another 1000 were wounded.

Today you can learn more about the history of the US Navy in Hawaii, and honor the casualties and veterans of Pearl Harbor at several sites throughout Honolulu, including the USS Bowfin Submarine Museum Park, the USS Arizona Memorial, Pearl Harbor National Memorial, Pearl Harbor Aviation Museum, Battleship Missouri Memorial and USS Oklahoma Memorial. There are also numerous tours you can take that combine several of these sites together with expertise from a local guide – and even offer line-hopping privileges so you can stay focused on the history at hand.

Native Americans enlist in the military at five times the national average, with the highest per-capital participation of any other population group in the country and a history of service that dates back to the first days of the United States’ existence. Learn more about the contributions of Indigenous veterans at the Navajo Veterans Memorial Park, which honors the Dine code talkers who were the backbone of Marine Corps efforts to use Indigenous languages to create secret, uncrackable transmissions during World War I and World War II.

Get more travel inspiration, tips and exclusive offers sent straight to your inbox with our weekly newsletter.

Kansas City is home to the National World War I Museum, selected in 1921 in part because the city’s rail station had proved quite the crossroads for thousands of soldiers criss-crossing the country as they prepared for, shipped out to, and returned from the front.

Indeed, the handsome art deco Liberty Memorial Tower sits right across from Union Station. But it’s the museum itself where you can really linger – rather than focusing only on the US troops, the museum’s collection includes items from every nation which participated in World War I and is one of the largest collections of WWI artifacts in the world.

World War I centenary: 10 places to commemorate the Great War

In 1866, Congress passed the Army Organization Act, allowing for the formation of four regiments of Black calvary who initially served out of Fort Leavenworth, Kansas and soon spread across the western frontier. The men serving in these units soon came by the nickname “Buffalo Soldiers” when they encountered Native Americans across the plains, and the name stuck to the 10th Cavalry from the Civil War through numerous other conflicts, including the Spanish American War and Philippine-American War and on through the Korean War.

Some of the most famous Buffalo Soldiers include boxing great Joe Louis and ground-breaking baseball player Jackie Robinson. Even after the traditional regiments were effectively disbanded and integrated with white troops, their legacy lived on in songs by musicians like Bob Marley, The Flamingos and Quincy Jones. You can learn more about the proud and complex history of these tenacious troops at a museum dedicated to their achievements in Houston, Texas – the Buffalo Soldiers National Museum.

The 7 best parks in Houston

Gettysburg remains an important touchstone for Americans even 157 years after one of the most crucial battles of the Civil War was fought here and President Abraham Lincoln’s famous address on national unity. At the Gettysburg National Military Park museum, you can learn more about why it was such a significant – and bloody – campaign that cost 8000 soldiers their lives.

Take a tour of the battlefield itself, whether self-led, with a park ranger, or on a guided bus tour, and pay a visit to Dobbin House, an important stop on the Under Ground Railroad in the region and the oldest surviving home in the area. Last but certainly not least, pay your respects to the 3500 Union soldiers who are interred at the Gettysburg at the National Cemetery.

While it’s just an hour and a half from Washington, DC to Gettysburg, you can make a day trip or a weekend of it by booking a stay nearby. You can actually rent abolitionist Thaddeus Stevens’ log home – built in 1790 and beautifully restored as a vacation rental – which is close to numerous historic sites like the Shriver House Museum and Jennie Wade House.

The 6 best hikes in the Poconos to experience history, changing leaves and waterfalls

Best known as the home of the Chicago Bears, it’s sometimes easy to forget that Soldier Field is a memorial to those service members who gave all in World War I. But that’s not all Chicago has to offer veterans or those who want to learn more about service members’ contributions.

Pay a visit to the Pritzker Military Museum and Library, founded by Colonel Jennifer N. Pritzker, IL ARNG as a non-partisan institution dedicated to increasing public awareness and understanding of military history and the many individuals who played a part.

You can also visit the National Veterans Art Museum, which for 35 years has collected over 2500 artworks by those who have served in combat, not only in the US, but around the world. The powerful works in the collection range from paintings and sculptures to intermedia pieces and installations that reflect on themes from PTSD to portraiture, reentry to revolution.

You might be surprised that the National World War II Museum is in New Orleans rather than, say, Washington DC. But it was Louisianan workers who designed and constructed the amphibious Higgins Boat landing craft that helped US soldiers succeed in campaigns like the famous storming of Normandy on D-Day.

Today, the World War II Museum has a slew of artifacts in their collection, from preserved documents and footage to a restored watercraft, aircraft, submarines and more.

While women weren’t officially allowed to join the military until the Army Nurse Corps was created in 1901, countless women served served their country since the American Revolution – and some like Cathay Williams even disguised themselves as men to get into active combat. You can learn more about the long history of women in the military at the the US Army Women’s Museum in Fort Lee, Virginia.

This unique institution first got its start in 1955 in For McClellan, Alabama, but has since lived a few different lives in a few different locations before settling down in Fort Lee Virginia in 1999 and expanding in 2018. Today, it’s home to over 1.5 million documents, as well as uniforms, photographs and other artifacts that paint a vivid picture of the oft-overlooked heroines of the US military.

Go back to the beginning of US military history at the Museum of the American Revolution in Philadelphia. It’s one of the most popular attractions in a city already packed with history, and goes beyond what you might have read in your elementary school textbooks to include the stories of women, African-Americans and Native Americans.

You can get a broad overview of the Revolution and how it unfolded, as well as more personal, in-depth look at figures like Richard St. George, who is the focus of a new exhibit called Cost of Revolution: The Life and Death of an Irish Soldier.

Last but certainly not least, the nation’s capital is, naturally, full of sites honoring veterans lives and contributions. From the National World War II Memorial to the Korean War Veterans Memorial, the Vietnam Veterans Memorial and Vietnam Women’s Memorial to the Tomb of the Unknown Soldier, many are well-known, thoughtfully designed tributes to those who lost their lives fighting for their country.

Others, like the American Veterans Disabled For Life Memorial, honor a different sort of sacrifice, while the United States’ oldest and best-known resting place for veterans endures at Arlington National Cemetery. There are also tours that combine some of the city’s most significant memorials and give you a chance to hear their stories in detail from a knowledgeable guide.

But there are numerous museums, too, where you can learn about US military history and the veterans who took part. The African American Civil War Museum tells the story about the men for whom military service was not just an act of patriotism, but also a path to freedom. For a particularly moving experience, opt for an African-American history city tour of DC that includes a stop at this unique museum.

The National Guard Memorial Museum encompasses nearly 400 years of this unique wing of the Department of Defense – and you can even take a virtual tour, too. American Sailors are honored with their own collection, too, at the National Museum of the US Navy. And, of course, the National Air & Space Museum and National Museum of American History have much to offer those interested in military history, too.