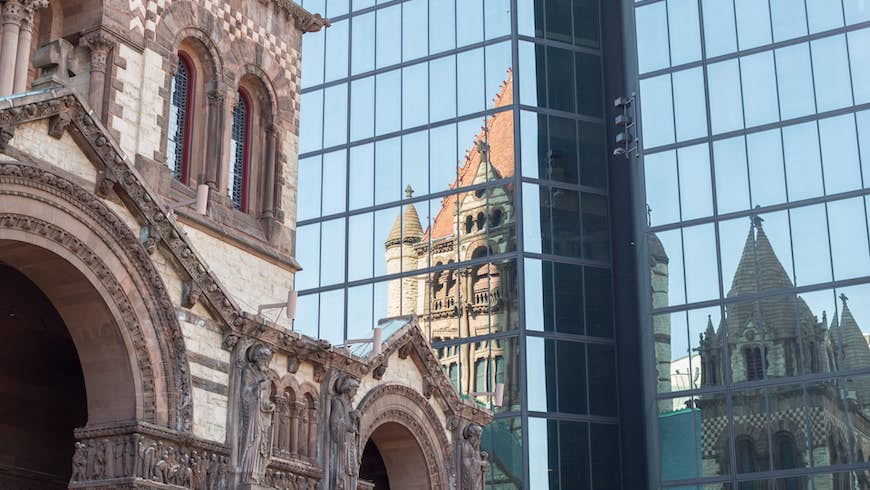 Packing incredible history, a thriving arts scene, and enough New England clam chowder to satisfy the most discerning foodies, Boston is a traveler’s treat. Luckily it’s also geographically small and logistically manageable. The sights and activities of principal interest to travelers are contained within an area that’s only about 1 mile wide by 3 miles long.

This makes Boston a wonderful walking or cycling city. Otherwise, most of the main attractions are accessible by subway. Some outlying sites require a bus ride. And a few – namely the Boston Harbor Islands – require a boat ride or two.

Incidentally, Boston is a waterside city, and riding in boats is part of the fun. Water shuttles are a convenient transportation option for a few harborside destinations, including the airport.

Here’s everything you need to know about getting around in Boston.

In recent years, Boston has made vast improvements in its infrastructure for cyclists, including painting miles of bicycle lanes, upgrading bike facilities on and around public transportation, and implementing an excellent bike-share program. Boston drivers are used to sharing the roads with their two-wheeled friends (and they are used to arriving after their two-wheeled friends, who are less impeded by traffic snarls).

You can bring bikes on the T (subway), commuter trains, and most buses (those equipped with exterior bike racks) for no additional fare. Bikes are not allowed on green-line trains, inside buses, or on any trains during rush hour (7am to 10am and 4pm to 7pm, Monday to Friday).

Boston’s bike-share program is Blue Bikes. There are 200 Blue Bikes stations around Boston, Cambridge, Brookline and Somerville, stocked with 1800 bikes that are available for short-term loan. Download the app or visit any bicycle kiosk to purchase your pass. Pay $2.50 per half-hour for bike use or purchase a one-day Adventure Pass for an unlimited number of two-hour bike rides in 24 hours. Return the bike(s) to any station in the vicinity of your destination.

There are also several options for bike rental in Boston. Urban AdvenTours rents road bikes and mountain bikes, in addition to the standard hybrids. For an extra fee these guys will bring your bike to your doorstep in a BioBus powered by vegetable oil.

Get more travel inspiration, tips and exclusive offers sent straight to your inbox with our weekly newsletter.

Cambridge Bicycle is great for cycling along the Charles River. Rentals are three-speed commuter bikes – nothing fancy, but solid for city riding. Papa Wheelies is a well-established shop also convenient for the Charles River, catering to everyone from families to professional cyclists. And the Bicycle Exchange is just north of Porter Square, convenient to the Minuteman Bikeway.

The MBTA operates bus routes within the city. These can be difficult to figure out for the short-term visitor, but schedules are posted on the website and at some bus stops along the routes. If you’re transferring from the subway on a Charlie Card, the bus fare is free.

The silver line, a so-called “rapid” bus, starts at Downtown Crossing and runs along Washington St in the South End to Roxbury’s Dudley Square. Another route goes from South Station to the Seaport District, then under the harbor to Logan International Airport. This waterfront route costs $2.75 ($2.25 with a Charlie Card), instead of the normal bus fare.

The silver line is different from the regular MBTA buses because it drives in a designated lane (supposedly reducing travel time). More importantly, the silver line starts/terminates inside the South Station or Downtown Crossing subway terminal, so you can transfer to/from the T without purchasing an additional ticket.

While boats will likely not be your main means of transportation, they are useful for a few destinations, primarily the Boston Harbor Islands and Charlestown. Ferries to Provincetown and Salem provide a pleasant transportation alternative for day trips out of the city. There is also a water-shuttle service to the airport and water taxis that make stops at destinations along the waterfront.

The MBTA operates the USA’s oldest subway, built in 1897 and known locally as the “T.” It’s the quickest and easiest way to get to most destinations, and runs from 5:30am or 6am until 1:30am. There are four lines – red, blue, green and orange – that radiate from the principal downtown stations: Downtown Crossing, Government Center, Park St and State. When traveling away from any of these stations, you are heading “outbound.”

At night, the last red-line trains pass through Park St around 12:40am (depending on the direction), but all T stations and lines are different: check the posting at the station.

It is not easy and not necessary to drive in Boston. Keep in mind that Boston is notorious for counter-intuitive traffic patterns, unexpected one-way streets, impatient drivers, impromptu U-turns and the nerve-rattling “Boston left.” (The latter refers to the move where a driver shoots out into an intersection and turns left as soon as the light turns green, instead of yielding to oncoming traffic.) And did we mention the lack of parking?

Most importantly, it’s often quicker and easier to reach your destination by public transportation or by bike than by car. Even if you drive your car to Boston, you might as well give it a rest while you are in the city (though it may come in handy for day trips out of town).

Cabs are plentiful but expensive. Rates are determined by the meter, which calculates miles. Expect to pay about $15 to $20 between most tourist points within the city limits, without much traffic. If you have trouble hailing a cab, head to any nearby hotel, where they congregate.

The MBTA named its Charlie Card after a fictional character from the Kingston Trio hit song Charlie on the MTA. Charlie’s sad story was that he could not get off the Boston T (then known as the Metropolitan Transit Authority) because he did not have the exit fare.

The plastic cards are available from the attendant at designated T stations. Once you have a card, you can add money at the automated fare machines; at the turnstile you will be charged $2.25 per subway ride.

The system is designed to favor commuters and cardholders. If you do not request a Charlie Card, you can purchase a paper fare card from the machine, but the subway turnstile will charge you $2.75 per ride. Similarly, Charlie Card–holders pay $1.70 to ride the bus, but for those paying cash it’s $2.

Tourist passes with unlimited travel (on subway, bus or water shuttle) are available for periods of one day ($12) or one week ($21.25). Kids 11 and under ride for free. Passes may be purchased from vending machines in most T stations and at MBTA sales outlets citywide. For longer stays, you can buy a monthly pass allowing unlimited use of the subway and local buses ($84.50).

Boston attempts to cater to residents and visitors with disabilities by providing cut curbs, accessible restrooms and ramps on public buildings; but old streets, sidewalks and buildings mean that facilities are not always up to snuff. Download Lonely Planet’s free Accessible Travel guides for more information.

Most major museums are accessible to wheelchairs, while the Isabella Stewart Gardner Museum, the Museum of Fine Arts and the Museum of Science offer special programs and tours for travelers with disabilities.

Many tours use vehicles that are wheelchair accessible, including Boston Duck Tours and New England Aquarium Whale Watch. Walking tours such as the Freedom Trail and the student tour of Harvard Yard are also accessible, though the historic buildings may not be.

MBTA buses and commuter trains are accessible, although not all subway trains and stations are. See MBTA’s website for more information. Ferries to the Boston Harbor Islands, Provincetown and Salem are all accessible.

You might also like:
7 best day trips from Boston
21 free things to do in Boston
How to spend the perfect weekend in Boston