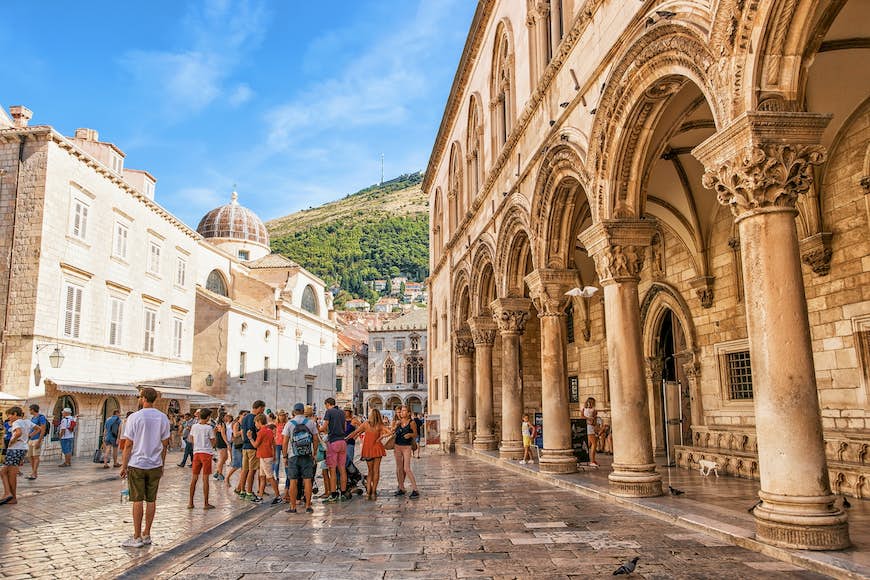 Croatia’s top destination, Dubrovnik’s diminutive old town lies within sturdy medieval fortifications, overlooking the deep blue Adriatic. Here we introduce historic attractions in the old town, including noble Baroque buildings, museums and galleries. Beyond the walls, we take you along the coast to discover the best beaches and nearby islands. Along the way, we also suggest some of the most unique places to eat, drink and shop.

Walk a complete circuit of the City Walls

Of all the things to do in Dubrovnik, the absolute unmissable experience is a walk around the battlements of the medieval city walls. A complete 2km (1.25-mile) circuit reveals fantastic views over the old town’s terracotta rooftops and out to sea. Originally built in the 13th century, the walls protected the city (then known as Ragusa) from the outside world. At night, the two entrances into the city Pile Gate and Ploče Gate were locked, and wooden drawbridges hoisted up to prevent intruders from entering.

When the Balkan peninsular came under threat of attack by the Ottoman Turks in the 15th century, the walls were further reinforced with sturdy towers and bastions, plus some 120 canons. The main access point to the battlements is up a flight of stone steps, on your left as you enter town through Pile Gate. In summer the number of daily visitors is limited to prevent overcrowding, so early online booking is recommended. If you’re lucky enough to be here in winter, you might have the walls all to yourself.

Drink morning coffee on the Stradun

Coffee drinking is a morning ritual in Dalmatia. In Dubrovnik, the place to do it is the Stradun (aka Placa). This 300m-long white limestone-paved promenade, the main thoroughfare through the old town, effectively links Pile Gate and Ploče Gate. The 17th-century Baroque stone buildings that flank the Stradun host small shops and open-air cafes at street level. This is where locals meet for coffee, read the morning newspapers, and watch the world pass by. One of the best spots is Gradska Kavana on a raised terrace at the end of the Stradun. Interestingly, the Stradun used to be a shallow sea channel – it was filled in during the 12th century, creating the city as you see it today.

See how local aristocrats once lived at the Rector’s Palace

Until 1808, Dubrovnik was a tiny but sophisticated self-governing republic called Ragusa. Each month, local councilors would choose a different citizen to assume the role of Rector – this short-term appointment was intended to prevent any one person becoming too powerful. During his term in office, the Rector lived on the upper floor of the 15th-century Gothic-Renaissance Rector’s Palace.

These quarters now house the Cultural History Museum. Here you can see how local aristocrats once lived, amid Baroque furniture, gilt-framed oil paintings, lavish costumes, weapons, and even a sedan chair.

Down at ground level, off the internal courtyard, note the entrance to the former meeting rooms of the Great Council and the Senate. Above the door is a plaque, saying Obliti privatorum publica curate (Forget private affairs, and get on with public matters). There is also a prison cell and a chapel.

For centuries, Dubrovnik gourmets have relished oysters from Mali Ston Bay on Pelješac peninsular, formerly part of the Republic of Ragusa. If you haven’t tried them, you can eat them here in Dubrovnik old town. The owner of Bota Oyster & Sushi Bar cultivates his own oysters in Ston, and brings them into town fresh each morning. Said to be a powerful aphrodisiac, they are served on crushed ice, still in their shells, with a wedge of lemon. If you’re queasy about the slippery texture, you can order oyster tempura instead, and have them fried in a light batter.

It may sound ghoulish, but in the Middle Ages people believed that relics (body parts of long-deceased saints) could bring about divine intervention. As these human remnants were considered sacred, they were encased in gold plating, and decorated with intricate filigree and valuable jewels. The treasury adjoining Dubrovnik cathedral displays a horde of 138 gold and silver reliquaries – the centerpiece is the skull of St Blaise (Dubrovnik’s patron saint) encased in a golden crown. Many of these reliquaries originate from the Byzantine Empire, and were brought to Dubrovnik by local seafarers returning from voyages to the East.

Just outside Ploče Gate, KAWA is a concept store stocking one-off items of clothing by young Croatian designers, as well as jewelry, tote bags, ceramics, and nicely-packaged cosmetics, olive oil and rakija (a potent spirit). It’s a great place to buy authentic presents to take home, as well as being a nice way to support local creatives.

Watch the sunset over drinks at Buža bar

On the rocks high above the sea, below Dubrovnik’s south-facing walls, you’ll find two open-air bars, somewhat confusingly both called Buža: Buža I and Buža II. They’re both good, so it doesn’t matter which you choose. Better still, try both. Informal and fun, they have rock-and-concrete terraces, with tables shaded by big white parasols.

The choice is basic, just beer or wine (payment by cash-only), but the views over the open Adriatic are absolutely stunning. Come in the morning and have a swim. Or come in the evening, and enjoy the sunset followed by the romance of a star-filled sky.

Opened in 2019, the funky Red History Museum shows how people lived in Croatia when it was part of Socialist Yugoslavia (1945-1991). Displays include a series of rooms from a typical 1970s apartment, complete with furniture from that time. The retro look is certainly hip, as are the ceramics, the posters, and the graphic design of the magazine and record covers. More sinister aspects, such as the Yugoslav secret police and the Goli Otok political prison are also referenced.

Entered off the Stradun, the Franciscan Monastery centers on a 14th-century Romanesque cloister, giving onto a garden with palms and citrus trees. One of Europe’s first pharmacies was founded here, by the monks, in 1317. There’s a small museum, displaying old-fashioned laboratory equipment and storage jars. Nowadays, the Franciscan Pharmacy lies just inside the monastery’s arched entrance gate. Its glass-fronted cupboards are stocked with well-known international brand medications.

But on the marble counter, you’ll see several pots of natural hydrating face creams, based on rose, lavender and rosemary, each labeled “Mala Braca 1317 AD”. These creams are still prepared here, in the pharmacy, to secret centuries-old recipes, known only to the monks.

Learn about Dubrovnik sea power at the Maritime Museum

Dubrovnik lived her Golden Age in the 16th century, when her extraordinary wealth was based on shipping and trading. At that time the tiny republic of Ragusa, she had one of the biggest fleets in the world, with some 180 ships and 4000 sailors. At the Maritime Museum, in St John’s Fortress, guarding the old harbor, you can learn more about Dubrovnik’s former naval power. Exhibits include model ships, paintings, maps, navigational equipment, and sailors’ uniforms.

Reflect on the horror of conflict at War Photo Ltd

Dubrovnik knows how devastating war can be, having been under siege for eight months between 1991 and 1992. Witness the human suffering caused by the break-up of Yugoslavia at War Photo Ltd. On the upper floor, you can see scenes from everyday life during the conflicts that plagued Croatia, Bosnia-Herzegovina and Kosovo, as documented by photo-reporters. On the ground floor, the gallery hosts temporary exhibitions of photo-journalism from war zones around the world. Past shows have featured Syria, Sudan, Congo and Northern Ireland.

The tiny island of Lokrum is a 10-minute boat ride from Dubrovnik’s old harbor. But a more amusing way to visit it is to join a sea kayaking tour, departing from a small beach near Pile Gate. You’ll paddle around Dubrovnik’s fortifications, then head to Lokrum, to swim, snorkel, hike and cliff jump.

Green and lush, Lokrum is home to an abandoned 11th-century Benedictine Monastery, a botanical garden with peacocks, and a hilltop fort, built by Napoleon in 1806. Local legend says that the monks, angered that Napoleon had closed their monastery, put a curse on anyone who should try to possess the island. It may be superstition, but still today no one is allowed to remain on Lokrum overnight.

Hike up Mt Srđ for a panoramic picnic overlooking Dubrovnik

Surely one of the most Instagrammable views of Dubrovnik is to be had from Mount Srđ which rises directly behind the old town. One day in advance, contact Piknik Dubrovnik and ask them to prepare you lunch, packed in an easy-to-carry insulated backpack, complete with a map and blanket. Then, to reach the peak of Srđ, hike a two-kilometer zig-zagging hillside path, following the Stations of the Cross. At the top, there’s a 19th-century fortress, a bar-restaurant, and a viewing deck affording stunning vistas down onto town and out across the Adriatic. If the hike up looks too steep, you can catch the modern cable-car instead, then hike back down after your picnic.

Swim and sunbathe at Šunj beach on Lopud island

Sandy beaches are rare in Dalmatia, but there is one near Dubrovnik – Šunj on Lopud. Catch a white-and-blue Jadrolinja ferry from Dubrovnik’s Gruž port to Lopud. As you sail into the bay, note the fortified Franciscan monastery, high above the sea – recently renovated, it is now an ultra-luxurious retreat known as Lopud 1483.

From the palm-lined seafront promenade, follow a two-kilometer path through lush Mediterranean vegetation to reach Šunj (golf-buggy rides are also available). A glorious swathe of sand, giving onto a sheltered bay with warm shallow sea, it has several seasonal bars serving drinks and snacks, and hiring sun-beds. While on Lopud, contemporary art lovers should also check out Your Black Horizon, a pavilion housing a lighting installation by artist Olafur Eliasson and architect David Adjaye, originally exhibited at the Venice Biennale in 2005.