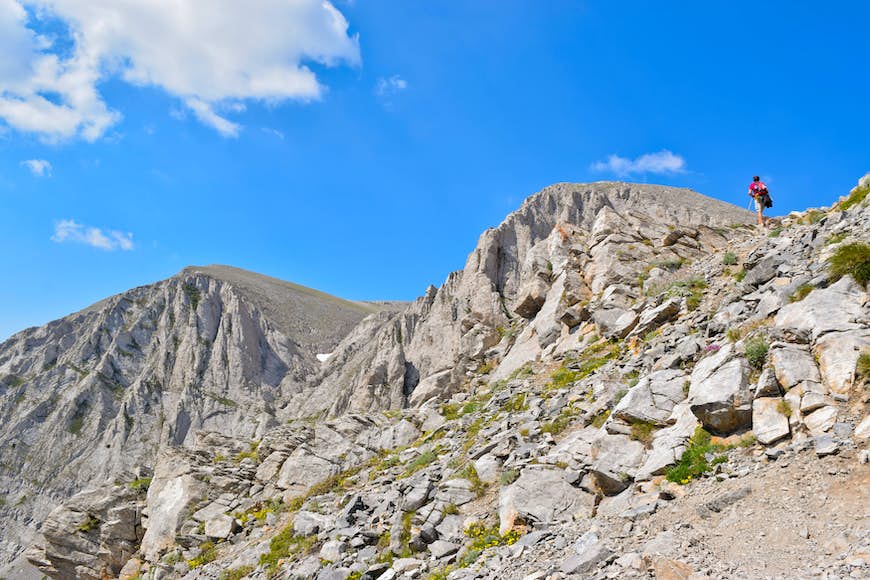 To visit one of Greece’s national parks is to see the country at its most wild and dramatic. The country’s first park, Mount Olympus, was established in 1938, and there are now a total of 10 national parks and two marine parks in Greece, set up to protect their unique wildlife and plant life.

Facilities in parks are often basic, walking trails are not always maintained and overnight refuges are simple. But to most, the facilities matter little when compared to nature’s magnificent backdrop. Here’s a rundown of Greece’s national parks and what they offer to visitors.

Explore the planet’s most surprising adventures with our weekly newsletter delivered to your inbox.

A focal point of Ancient Greek mythology, awe-inspiring Mt Olympus is simply spectacular to behold, firing visitors’ imaginations today, just as it did for the ancients who venerated it.

Olympus became Greece’s first national park in 1938 and is home to more than 1700 plant species, some rare and endemic, as well as wolves, jackals, deer and more than 100 bird species. Legend also places it as the home of the Greek gods, and many hikers are compelled to summit the park’s namesake peak, the highest mountain in Greece, overnighting in one of the 15 refuges that dot the forested hillsides en route.

Best for a quick trip from Athens

This wooded parkland an hour drive north of Athens is a popular escape for Athenians wanting to get their weekend nature fix, with trekking, climbing, biking and canyoning all on offer.

The park is criss-crossed by hiking trails and is home to a number of cave systems, as well as much wildlife, including a significant population of rare red deer. Two large, full-featured hiking lodges are also located in the park (serving food), as well as a cable car, which was built to serve the hilltop Mont Parnes Regency Casino,

The park is popular with hikers, rock climbers (1882m-high Kouvelos has a particularly popular rock face for climbing), and, in the winter months, skiers and snowboarders.

The wildlife is abundant. Brown bears, wolves and wild pigs are just some of the 40 mammal species, alongside 260 bird species of birds, including the world’s largest colony of Dalmatian pelicans at Mikri Prespa, as well as great white pelicans. A clutch of sleepy, atmospheric highland villages act as springboards to this majestic wilderness.

The largest of Greece’s national parks and one of the largest marine protected areas in all of Europe, the National Marine Park of Alonnisos was Created in 1992 with a primary aim of protecting the endangered Mediterranean monk seal and several rare seabirds.

In summer, boats from Alonnisos and Skopelos, both members of Greece’s Sporades island chain, run full-day trips through the pristine park, whose sea floor is carpeted in oxygen-producing posidonia. The shy monk seal is rarely seen, but you may spot dolphins (three species), turtles, Eleonora’s falcons and even migrating whales.

Trails criss-cross Iti National Park. Ipati, where noticeboards illustrate potential routes, makes a good starting point. For great day hikes, trek for around four hours (8km) each way to the often-locked refuge (Trapeza at 1850m) near the Pyrgos summit (2151m), or to the villages of Kastania and Kapnohori.

Best for soaring cliffs and wildflowers

At the heart of Samaria National Park is 16km-long Samaria Gorge, one of Europe’s longest canyons, which draws legions of hikers to Crete each year.

There’s an undeniable raw beauty to the canyon, with its soaring cliffs and needlenose passageways. It’s especially scenic in April and May, when wildflowers brighten the trail. There are rest stops along the way with basic toilet facilities, and springs where you can fill up your water bottle. Keep your eyes peeled for kri-kri, an endangered wild goat the park was created to protect from extinction.

Best for snorkeling with turtles

Encompassing the marine area of the Bay of Laganas on the southern end of the island of Zakynthos, the National Marine Park of Zakynthos was established to protect one of Europe’s most endangered marine species, the loggerhead turtle.

Zakynthos hosts the largest density of loggerhead nests, with up to 1300 recorded in some years along the Bay of Laganas. During breeding season (from May to October), nesting beaches are barred to visitors between dusk and dawn; but many eggs are still destroyed by visitors. You may be able to spot a turtle on a snorkelling trip around the island, and you can learn more about protecting them at the island’s Mediterranean Marine Life Centre.

Best for admiring the Temple of Poseidon

Cape Sounion is one of Greece’s smallest national parks and is home to a number of sandy beaches, short walking trails and a scattering of atmospheric villages.

However, the reason most people visit is to admire the mighty Temple of Poseidon, which stands atop a craggy spur that plunges 65m to the sea. Built in 444 BC – the same year as the Parthenon – of marble from nearby Agrilesa, it is a vision of gleaming white columns. Sailors in ancient times knew they were nearly home when they saw the first glimpse of white; views from the temple are equally impressive.

Best for rivers and lakes

North of Ioannina, the large Northern Pindos National Park includes the Vikos-Aoös region (technically its own national park) around the plunging Vikos Gorge, and the Valia Kalda forest north of Metsovo. Consistent across the nearly 200,000 hectares are pristine rivers and forests, flowering meadows, and shimmering lakes.

Standing proud over the island of Kefalonia is the lumbering hulk of Mt Ainos (1628m), most of which falls within Ainos National Park. The mountain’s upper reaches are dominated by ancient, gnarled Greek fir and black pine, through which afternoon mist and cloud frequently swirl.

Visitor facilities within the park are fairly undeveloped, but five walking trails have been established. The two most popular trails go up to the summit from opposite sides of the mountain and then loop back around to their respective starting points. You can also drive almost all the way to the summit for amazing views across the island. Look out for the small wild horses that roam the park.