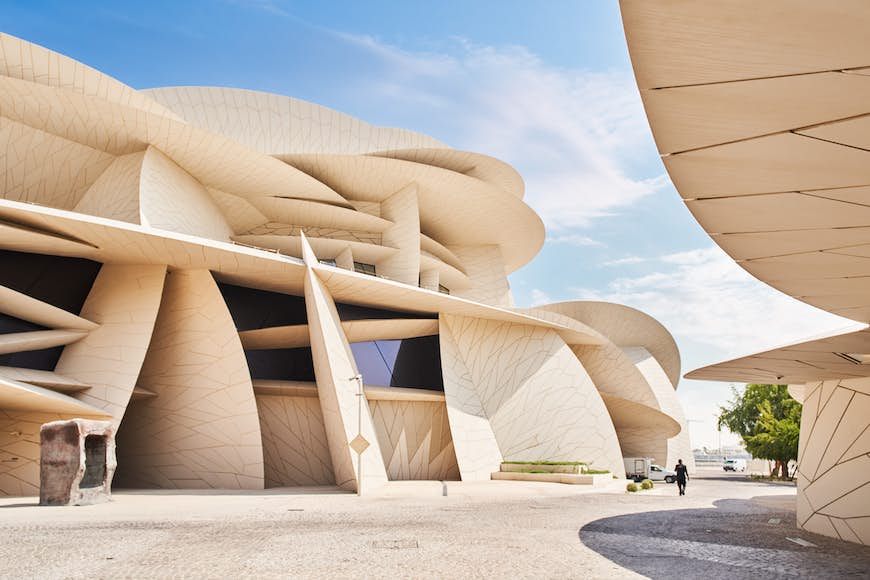 Exploring Qatar’s fascinating history rewards travelers with a glimpse of rich traditions and cultural heritage passed down through generations. The sense of individuality has become embedded in Qatar’s progression, development, and contemporary vision, leading to places where the past and future collide in incredible ways.

Since the 1970s, developments in art, architecture and cultural projects like museums have come into their own, all interwoven with a deep respect and homage to the nation’s past. Archaeological sites are well-preserved and looked-after, offering a window into the past among a mix of modern mega-projects, futuristic smart cities, and skyscrapers.

Get a history lesson at the National Museum of Qatar

Before the 18th century, Qatar was inhabited by nomadic Bedouin who set up small villages around pearl diving and fishing. Even today, if you know where to look, you can see how the Bedouin tribes that moved to the city for a new way of life didn’t forget their roots.

The best place to start your exploration is at the National Museum of Qatar (NMoQ), housed in a breathtaking piece of modern architecture inspired by the desert rose – a gypsum formation found locally in the desert. The museum brings the story of Qatar and its people to life, showcasing its culture and traditions along with the country’s ties to places around the globe. NMoQ is organized into three “chapters”: Beginnings, Life in Qatar, and The Modern History of Qatar, which take visitors on an evocative journey from the geological forces that shaped the peninsula to the present day.

The museum surrounds the Old Palace, once the home of Sheikh Abdullah bin Jassim Al Thani and the seat of government. Together the Old Palace and the NMoQ complement each other: two buildings from different times, standing together to indicate a harmonious co-existence between the past and the present.

Walk through the narrow alleyways of Souq Waqif

For centuries, Bedouin would bring their goods to trade at the ancient market site of Souq Waqif, and the first permanent shops were built around 250 years ago. Before that, vendors stood and sold their wares from makeshift stalls, as the market often flooded, and it is from this tradition that the souq’s name derives – waqif means ‘standing’ in Arabic.

But after a fire tore through the market in 2003, it was refurbished to replicate a 19th-century market, with wooden beams, narrow alleyways, and mud-brick buildings as a reminder of the days when it was the social heart of Doha. Such has been the success of this rehabilitation venture that the souq keeps growing to accommodate new ‘old alleyways.’

Today Souq Waqif is still one of Doha’s most popular destinations, and one of its most traditional. Walk through its alleyways and marvel at the different spices, dates, nuts, cloth, fragrances, makeup, clothing, accessories, shoes, toys, and antiques – you can’t help but feel like you’re in the Qatar of the past. The main streets, where you’ll find modern restaurants and cafes, is the perfect place to sample Qatar’s famous karak chai – black tea flavored with cardamom and evaporated milk.

Feel a sense of community at Msheireb Downtown

Doha’s downtown area, Msheireb – which translates as “a place to drink water” – was once the center of Qatar’s commercial activities and community living. From just a well, it grew into a hub where Qatari culture, heritage and the feeling of community flourished.

Today, the area has been transformed into what’s billed as the world’s first sustainable downtown regeneration project. The architecture is modern and contemporary, but it’s blended with Qatari culture in a way that feels right at home. In the spirit of the original neighborhood, Msheireb Downtown’s central square was designed to retain the sense of community and traditional roots that are the essence of Qatari heritage.

Walk through the square and marvel at this district where history and modernity collide. The surrounding restaurants, cafes and hotels are where people get together to reconnect and socialize. For a glimpse of the future, take a ride on the battery-operated, sustainable public transport, the Msheireb Tram.

Discover the best of Qatar’s art and architecture

Take a dhow ride on the Corniche

The dhow – a traditional sailing vessel with a long, thin hull and one or more triangular lateen sails – has been part of local culture since the pre-oil era, when most people lived on the coast, and fishing and pearl diving were the main sources of income. Later they were adapted to be used primarily to carry heavy loads of goods, including fruit and merchandise, as they cruised the coastal waters.

Almost 100 years later, the dhow is still around – you’ll find plenty of them along the Corniche, but the way they serve people has changed. Book one for a ride through the Gulf waters, with Doha’s skyline as a backdrop. Rates range from 20 to 50 Qatari riyal (about $6 to $15) per person, but you will probably need to haggle to get a good bargain.

Stroll through a Fereej in Katara Cultural Village

Katara Cultural Village, an iconic landmark in the West Bay area of Doha, is a showcase of the country’s history and its connection to the cultural heritage of the ancient Bedouin. Even the name “Katara” recalls the one of Qatar’s ancient names – “Catara” appeared on maps as far back as AD 150 and “Katara” in the early 18th century.

Today, Katara Cultural Village is a fusion of generations. It was constructed to look like a Qatari ‘Fereej,’ a typical time-worn neighborhood with a labyrinth of winding alleyways and cobbled pathways that open onto courtyards of granite tile. Everywhere you turn, there’s something to delight – colorful water fountains, the beautiful beach promenade or the majestic Katara Hills.

Katara’s most striking structures include the huge pigeon towers, the Blue Mosque, the Golden Mosque and the Greek-inspired grand amphitheater. Exhibition spaces always have something on display, and a wealth of immersive murals depict the culture of Qatar. For families, it’s hard to beat Katara Beach, a fun place to relax and enjoy Doha’s waters.

From sea to dune, adventure abounds in Qatar

For a dose of culture outside Doha, head for the Sheikh Faisal Bin Qassim Al Thani Museum. Located only 13.5 miles from Doha in Al Samriya, the museum features the sheikh’s personal collection of artifacts dating to prehistory, along with historic objects from the early Islamic era and those in daily use in Qatar until technology took over. Each piece was handpicked by Sheikh Faisal himself on his travels around the world, and the entire museum pays homage to Islamic traditions and the Qatari lifestyle. To visit, men and women are expected to dress modestly, with shoulders and knees covered.

To see another key place in Qatar’s history, take a 30-minute drive from Doha to the fort of Al Wajbah. In 1893, the army of Sheikh Jassim Bin Mohammed Al Thani defeated the Ottomans in Al Wajbah, and the site’s fort is still a place of great historical significance and national pride. It’s also a strikingly picturesque location, with its four watchtowers standing out impressively in the landscape.

No one can quite figure out when the mysterious Film City, about an hour and a half from Doha, was built – some say it was only in the past few years as part of a promotional video for the 2022 FIFA World Cup, but others claim it was built for an Arabic or Hollywood movie.

Whatever the story, one thing’s for sure – the minute you step into Film City, you’ll feel you’ve traveled back in time. It perfectly recreates a traditional Qatari village from before oil was discovered – complete with mud-brick houses, a mosque with minarets, arched lookout towers and dusty, palm-tree dotted courtyards. Feel free to wander around – everything is open and you’re likely to have the eerie place to yourself. At the very least you’ll be able to suspend disbelief and picture yourself in another era.