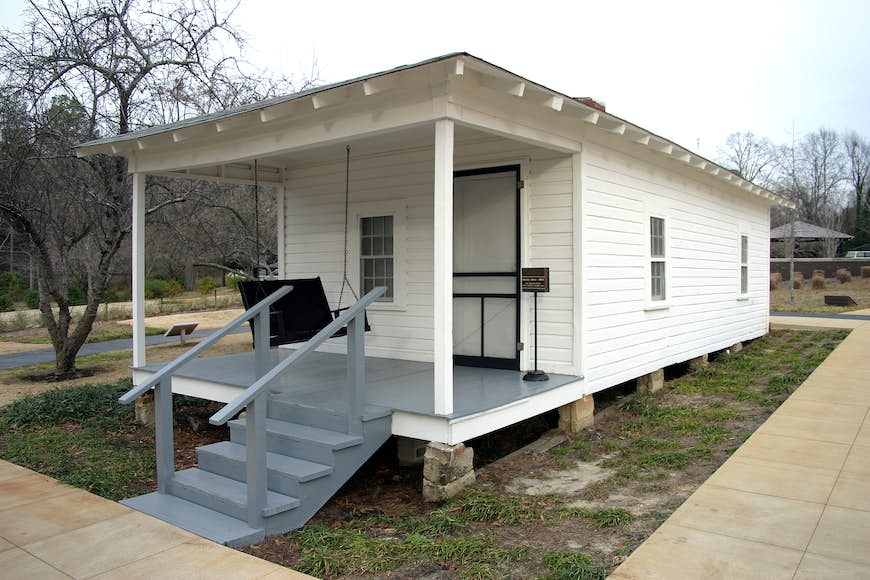 It’s been said that before Elvis, there was nothing. He’s the King of Rock, a style icon, a heartbreaker, a hip-shaker beyond compare, a devourer of unusual food and an unparalleled performer. His impact on music is profound, and so is his impact across the USA.

Graceland is, of course, ground zero for Elvis fans, especially each August when pilgrims gather there for Elvis Week, a celebration of his music and movies. But once you’ve visited his famously eccentric longtime estate and learned about the cornerstones of his career, head out on a trip to get a full sense of Elvis’s legacy across the country.

Hot on the heels of Baz Luhrmann’s new hit film Elvis, we’ve gathered the top places in the US where you can experience first-hand Elvis’ history first-hand.

9 museums for music lovers across the US

It’s only a two-room shotgun shack, but the modest white building with a swing on the front porch might be the most important two-room shotgun shack in American music history. The childhood home of Elvis Presley in Tupelo, Mississippi, where he lived until the age of 13 in 1948, remains a pilgrimage-worthy site. The building, which Elvis’s father Vernon Presley built by hand, has been restored to how it looked when Elvis was a child – furniture, table settings and all.

The Mississippi town of Tupelo offers a look at plenty more that influenced the young musician. You can also visit the small Assembly of God Pentecostal Church, where Elvis was first introduced to the gospel music that would shape his work; the Birthplace Museum, a tribute to the stories of his early life; and a souvenir shop with about 2000 items. True diehards go in June during the Tupelo Elvis Festival.

Natchez: 300 years of life on the river

The sprawling, airy mid-century modern house at 1350 Ladera Circle in Palm Springs, California, was supposed to be the site of Elvis and Priscilla’s wedding. But when a gossip columnist living around the corner outed their plans, this quiet property was besieged with media on the May 1, 1967 wedding day. The King and his queen-to-be made fast tracks to Las Vegas on Frank Sinatra’s private jet. Afterward, they returned to the House of Tomorrow, as it was known then, for their honeymoon.

Today the abode is known as the Honeymoon Hideaway. Tours, which are offered daily, blend Elvis history with a crash course in midcentury modern architecture, a lively and sleek style defined by open spaces, abundant glass and stone, and pops of color, all of which captured the free-wheeling, future-focused spirit of the time.

The first time Elvis walked into Sun Studio, in 1953, he was practically shooed away, but as the story famously goes, a receptionist spotted his talent, got his record across the legendary label-owner Sam Phillips’s desk, and, well, you know the rest. The building is essentially a music-history museum today, with all sorts of rock memorabilia on display and tours led by local musicians seven days per week. The stories they share will ensure you understand why the building is known as the birthplace of rock ‘n’ roll. (Spoiler alert: Jerry Lee Lewis, Johnny Cash and B.B. King also recorded here). In the carefully preserved recording studio, you can stand in the very spot Elvis stood in 1954 when he recorded “That’s All Right,” the short single that launched his long career.

How to spend a weekend in Franklin, Tennessee

True Elvis fans know to ask for the corner booth at Arcade Restaurant in Memphis. That’s where the King regularly sat at this downtown diner during regular visits for his beloved peanut butter and banana sandwich. But Arcade’s history extends beyond Elvis. Opened since 1919, it lays claim as the oldest restaurant in Memphis. From the robin-egg-blue vinyl booths to the boomerang patterns on the tabletops to the neon signs, little has changed, giving it a nostalgic vibe that takes you back to a time where Elvis songs played everywhere. It’s an ideal spot to fill up on classic grub like burgers and milkshakes or a treat off the all-day breakfast menu before you head to Graceland.

The 9 best Memphis museums: where music and American history meet

The thing about Las Vegas is that it’s nearly impossible to avoid Elvis – or his impersonators. Though his local debut in 1956 was panned by the press, Elvis went to Hollywood, started acting and returned to Sin City to perform his first show at the International in 1969, marking the start of a seven-year residency. By the end, that amounted to 837 sold-out performances for 2.5 million fans. Elvis’s popularity hasn’t faded, as you can tell from the many statues that dot the lively landscape. You can visit the Graceland Wedding Chapel or catch any number of tribute shows. Stroll the city to check out sites that made appearances in the 1963 film Viva Las Vegas, such as the Flamingo Hotel, the oldest hotel on the Strip and the location of the movie’s famous swimming pool scene, and the Little Church of the West, where he and Ann Margaret tied the knot.

When you think of Hawaii, you probably think of beaches, luaus and hula dancers. And Elvis. Few pop stars are as associated with 50th state as Elvis. He filmed three movies there, raised money for a Pearl Harbor memorial and recorded “Aloha from Hawaii,” a 1973 concert in Honolulu that was broadcast via satellite to 1.5 billion people in 40 countries. The event is commemorated by a bronze statue of the singer outside the Blaisdell Center, the concert venue. On any given day, fans stop by to hang leis around the figurine. Other must-sees for rock’n’roll pilgrims include the iconic but now-shuttered Coco Palms Resort and Puʻu ʻUalakaʻa State Wayside Park, both of which are featured in Blue Hawaii.

How to choose the best Hawaiian island for your trip

Fort Chaffee, a historic World War II army base in Arkansas, is located about 2.5 hours west of Little Rock. On March 25, 1958, when Elvis enlisted in the army, crowds flocked here to witness the newbie soldier gave up his famous sideburns. The modest building fell into disrepair in the 1990s, but it was restored in 2008 and opened as the Chaffee Barber Shop Museum in 2009. It houses the original barbershop pole, photos taken on the day of the landmark buzzcut and the camera used by the local photographer. Each year on March 25, crowds arrive to commemorate Elvis Haircut Day. Participants can get their hair cut by Jimmy Don Peterson, son of the late James Peterson, who gave Elvis his buzz, as fans celebrate with performances and lookalike contests.

I’ve been everywhere (at least in Arkansas and Tennessee): A Johnny Cash road trip

There are Elvis Presley fans, Elvis Presley super-fans and then there’s Don Epperly. The Roanoke, Virginia native passed away in 2012, but his Elvis-loving legacy lives on at this small-scale shrine to the King. Epperly constructed all of the buildings, each standing about 3 feet tall, by hand. Not only is there a scaled-down version of the famous Memphis estate, but there are also other buildings that were meaningful in his life, like his childhood home in Tupelo, performance halls where he shook his hips and even the Elvis Presley Car Museum – an attraction at Graceland, complete with Barbie Doll visitors.

Mini Graceland drew crowds by the busloads – really! – as Epperly and his wife added to it throughout the 1980s, but it fell into disrepair when he got sick in the 1990s. It’s been restored thanks to community support, and you can leave a donation to support its upkeep in the white donation box. You can’t miss it – it’s right next to the bronze Elvis statue.

When Elvis and Priscilla’s friends would visit them at Graceland, they would often stay at a nearby Howard Johnson, a utilitarian motor lodge. For many years since Graceland opened to the public in 1982, Elvis pilgrims committed to staying nearby could make reservations at the kitschy Heartbreak Hotel, which embodied the same no-frills vibe as the Howard Johnson. But everything changed in 2016 when the Guest House at Graceland was unveiled. Priscilla helped design the 450-room hotel, which consists of the Heartbreak Hotel’s building and an adjacent building. The modern property features 20 suites that pay tribute to the King in a low-key style. Elvis is honored in each room with clever design touches that he personally preferred, including televisions mounted in the ceiling and bold color schemes.

Born in the USA: our favorite destinations in Springsteen songs

Everything Elvis Museum in Cornelia, Georgia

Like Don Epperly, Joni Mabe (aka Queen of the King) is a super-fan who’s committed to sharing her Elvis love with the world. Her Everything Elvis Museum in Cornelia, Georgia (about 90 minutes north of Atlanta) is a lively shrine to the icon. With a collection that clocks in at around 30,000 items, it’s little surprise that it’s listed in the Guinness Book of World Records. Not only is it the largest assortment of stuff, it’s also easily the most unique, with things like Elvis’s wart and his alleged toenail. Squeamish? Not to worry. There are lots of photos, newspaper clippings, fan art, statuettes and Elvis-themed household goods such as lamps, towels and curtains. The museum is located in the Loudermilk Boarding House, a national historic landmark.

10 beautiful Georgia hikes to keep you busy in every season