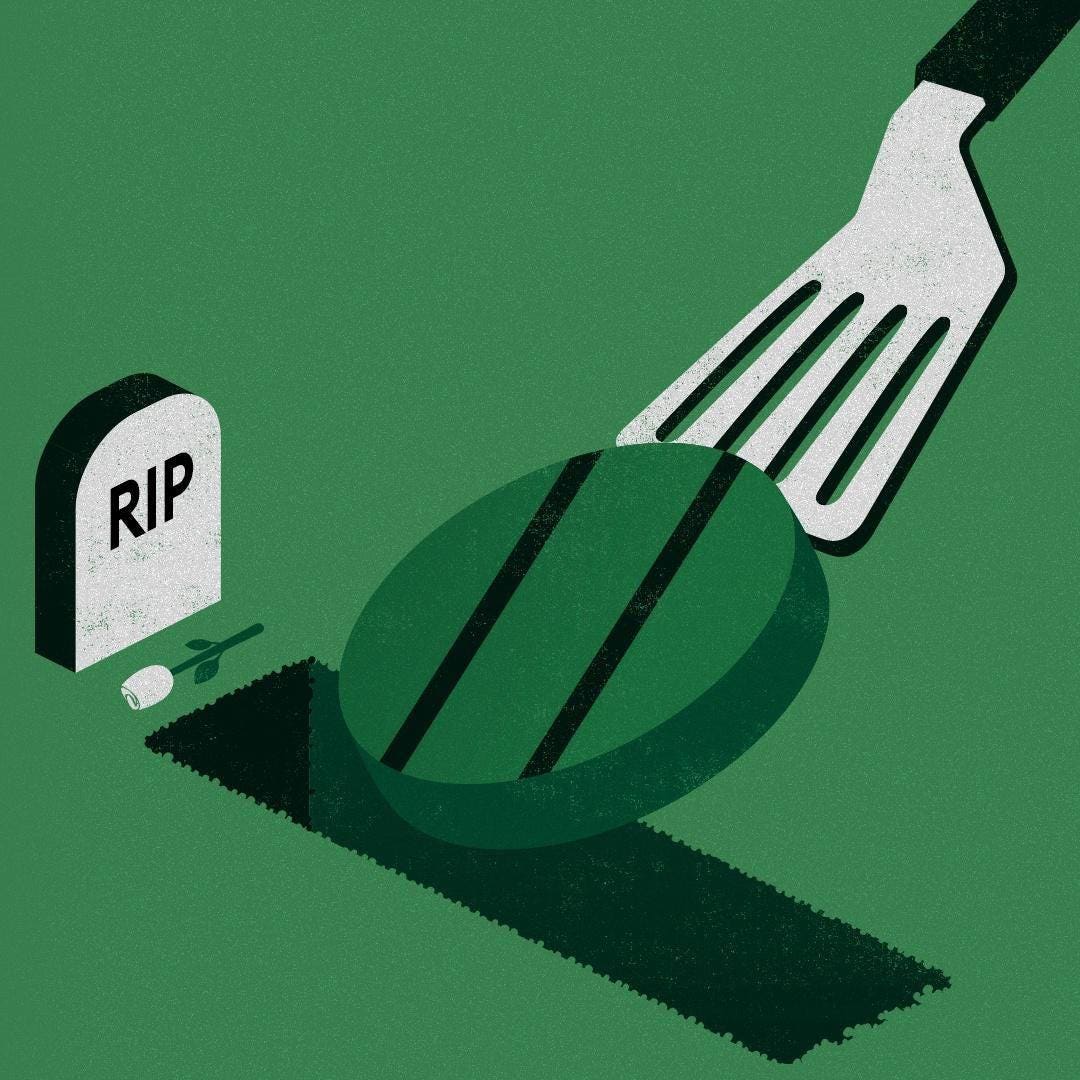 Did you catch my feature published last Saturday on the lifeless market for meatless meat? It’s gotten a lot of buzz. One food investor tweeted it out with a particularly strong reaction, saying the article “breaks through with real data and exposes the lies being spread by bias.”

A few of the key takeaways: sales and growth are stagnating and deals have slowed down. Investments in many of these plant-based meat startups are now being written off or revalued. Many tech investors who flooded into the food tech market with fresh funds ready to deploy had valued some food startups like they would tech companies with higher multiples. Now those valuations are returning to reality. Funds are pricing the companies closer to what food brands have historically commanded, which in many cases cuts their value in half.

The feature pretty much sums up what this newsletter is all about. That’s not to say meatless meat hasn’t been completely over-covered by the media. It has. But I aim to bring the perspective of finance and actual market realities to the conversation. Especially where there’s been too much hype otherwise. That hasn’t been done much with plant-based meat startups, and if you want more after reading the piece, check out my book, publishing December 6, where I delve further into these topics.

Some readers questioned why this article didn’t focus more on the meat industry’s fundamental problems. I write about that a lot, and also talk about it often. For those wanting more, here’s a recent radio interview I did all about the top meatpackers’ responses during the early days of the pandemic. I dig into the special congressional investigation of the industry’s top producers and their influence campaign targeting officials from state and local health departments to the highest branches of government.

Perhaps you’re disheartened by the news today that the Supreme Court has overturned Roe v. Wade. Maybe you will take to baking or to eating comfort food. Or maybe you are already out in the streets. I’ll sign off with a must-read on the topic from a colleague.

This is Forbes’ Fresh Take newsletter, which every Friday brings you the latest on the big ideas changing the future of food. Want to get it in your inbox every week? Sign up here.

Lifeless Market For Meatless Meat. The dream of plant-based chicken, pork and beef appears to be withering. Story by yours truly.

California Couple Gets Mega Rich Off Clif Bars. More than two decades after turning down a $120 million offer from Quaker Oats, Gary Erickson and Kit Crawford, the majority owners of Clif Bar, have agreed to sell the energy bar company to snack giant Mondelez for $2.9 billion, writes Jemima McEvoy.

I am now officially all out of the balsamic I had been stockpiling from my trip to Italy’s Emilia Romana in 2018. How do you like topping your summer salads?

Chloe Sorvino leads coverage of food and agriculture as a staff writer on the enterprise team at Forbes. Her nearly eight years of reporting at Forbes has brought her to In-N-Out Burger’s secret test kitchen, drought-ridden farms in California’s Central Valley, burnt-out national forests logged by a timber billionaire, a century-old slaughterhouse in Omaha, and even a chocolate croissant factory designed like a medieval castle in Northern France. Her book, Raw Deal: Hidden Corruption, Corporate Greed and the Fight for the Future of Meat , will publish in December 2022 with Simon & Schuster’s Atria Books.