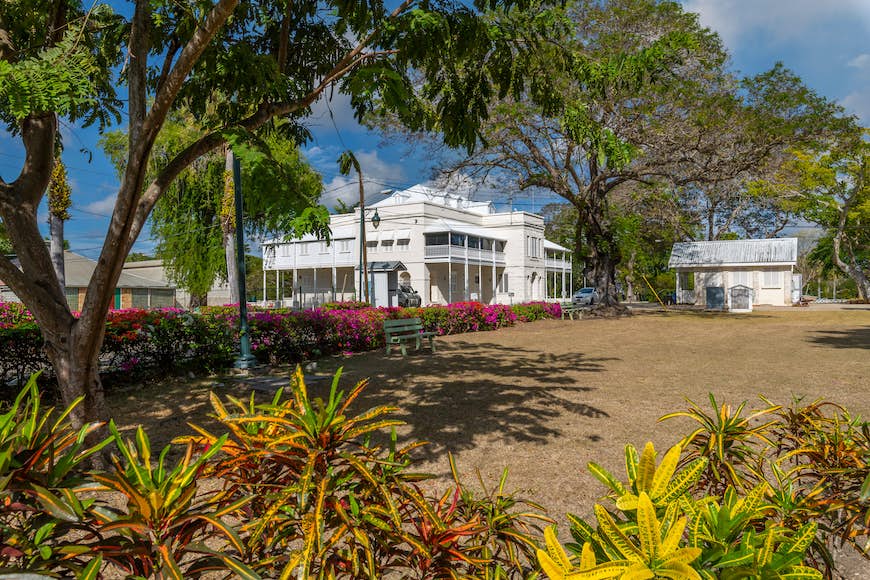 As a former sugar plantation colony, Barbados was stripped of much of its native forest cover under the British, but there are still some wonderful swathes of tropical greenery to explore. You can roam dense forests, meander through rugged seaside parks or stroll delightful gardens, all within a short drive of Bridgetown, Barbados’ historic capital.

Here’s our guide to the top spots to discover the island’s diverse flora and fauna and enjoy a picnic with spectacular views – just watch out for troupes of pilfering green monkeys!

This 50-acre seaside park on the island’s less-developed north shore runs up a rugged hillside to a rocky outcrop. Its sweep of grassland is dotted with wiry trees twisted into abstract sculptures by the persistent winds on the island’s wild Atlantic coast.

The steady breeze means it always feels fresher here than on the more developed side of the island, but this also makes the waters rough and unsuitable for swimming. However, Barclay’s Park is one of the best places on the island for hiking or running down on the sands or on the paths that lead up into the hills.

Along the shoreline, the park features fruit trees which the island’s children love to raid. Keep a lookout for island favorites such as the sea grape and cocoplum, which goes locally by the wonderful moniker of ‘fat pork tree.’

Bridgetown’s main urban park lies beside the Constitution River and it’s the place to go for a slice of tranquility away from the bustle of the capital. Position yourself under any one of the wonderful shady old trees for a truly pleasant Barbados afternoon.

The park’s main natural attraction is a legendary baobab tree that’s said to boast the widest trunk in the entire Caribbean. Local legend has it that the sapling was bought to Barbados on a slave ship from West Africa late in the 17th century, but another account has the seed floating across the Atlantic before settling on the edge of a lagoon long before the first Europeans arrived on the island.

Either way, the tree is estimated to be over 1000 years old and is one of the country’s seven wonders, alongside sights such as Harrison’s Cave and the Morgan Lewis Windmill.

The best time to visit Barbados for beaches, sun and festival fun

Head to Coco Hill Forest for a walk with a view

A top spot for hikes through towering forests and farmland filled with bananas, pineapples, mangoes and coconuts, this 53-acre private reserve climbs to a height of nearly 1100m (3609ft) above sea level, meaning great views down the Atlantic slope.

Hikers can enjoy 2.5km (1.6 miles) of trails that weave through patches of original jungle boasting indigenous ferns and palms, and areas being repopulated with native species.

You’ll be given a map to explore the forest at your leisure. Keep an eye out for interesting birds and monkeys high in the canopy and bring good footwear as the paths can be slippery after rain.

A riot of color and birdsong, Barbados’ most-celebrated gardens are located on a former sugar plantation in a large depression formed by a collapsed cave. This unusual setting produces a distinct microclimate where tropical flowers and trees thrive.

Visitors receive a visual guide to help identify the myriad plant species that line the trails. But you don’t need to be a botanist to appreciate the striking beauty of the gardens, with spectacular heliconias, imposing palms and tiny hummingbirds all jostling for your attention.

In addition to the main garden, there are smaller “secret” gardens off to the sides, perfect for a picnic or a spot of meditation. The gardens are the lifework of fabulously eccentric local horticulturist, Anthony Hunte, who welcomes visitors to his house on the estate’s converted stables (he’s known to serve a mean rum punch and freshly baked cake).

Hunte is also the house DJ and spins classical music soundtracks throughout the gardens via speakers hidden among the trails.

The 9 best places to visit in Barbados: rum, flying fish and Rihanna

Spot wildlife with the kiddies at Welchman Hall Gully

Protecting one of the last remaining expanses of the wild jungle that once covered Barbados, this 1.2km (0.74-mile) gully right in the middle of the island is a good place to check out native flora and imagine how the interior of the island looked before the plantations moved in.

As well as groups of monkeys, the gully is home to rabbits and tortoises, making it a great choice for a family outing, and a well-maintained pathway makes it easy to wheel around tiny travelers. Just outside the entrance, there’s a wonderful panoramic lookout point with views of Bathsheba on the Atlantic side of the island.

Rich in history and set in a remote spot in the island’s northern reaches, Farley Hill once housed Barbados’ most luxurious mansion. The grounds were off-limits to the public until a fire destroyed the building in 1965, and a year later, the estate became a park.

While it’s described as a national park, it’s more a recreational area than a protected swathe of wilderness. Nevertheless, it’s one of the most enchanting outdoor spaces on the island, with open grasslands, a small mahogany forest and fine panoramic views to the Atlantic.

Marvel at the towering royal palms in Flower Forest

Located on the former Richmond Sugar Plantation, in the heart of the island’s garden belt, the lush, 53-acre Flower Forest is a registered botanical garden with a variety of interpretive walks and magnificent views.

Alongside the most striking feature of the forest – the Caribbean royal palms that tower over 30m (98ft) – the heliconias and orchids will certainly catch your eye too. Most of the plants are labeled and the well-maintained walkways make getting around a breeze despite the hilly terrain.

In the early 19th century, Barbados was home to a series of signal stations built on high points around the island to observe marine traffic. Soldiers relayed any threat to the military garrison below by flying different flag combinations.

The finest of these signal stations is Gun Hill – surrounded by meticulously manicured gardens full of tropical flowers with plenty of benches for rest and contemplation. The gardens attract a wonderful variety of birds and butterflies and the panoramic views from the tower are amongst the best on the island.

Located just north of Bridgetown is one of Barbados’ best-kept secrets – Batts Rock park is one of the island’s smallest seaside parks but also one of its most lovely.

A densely forested hillside inhabited by monkeys sits right beside the glimmering waters of the Platinum Coast, providing the perfect vantage point for watching epic Bajan sunsets. Bring a picnic to enjoy at the tables under the trees right beside the golden sands.

Do I need a visa to visit Barbados?

Just outside the charming east coast village of Bathsheba, and less than 500m (1640ft) from the Atlantic breakers, the diminutive Andromeda Botanic Gardens are the most low-key and earthy of the island’s floral attractions.

What the gardens lack in size is more than made up for by the diversity of tropical plants and flowers, and there are self-guided tours through Andromeda’s 20 distinct zones.

Started as a private garden around the original owner’s home in the 1950s, Andromeda is now maintained by the Barbados National Trust and the plants are grown without the use of chemicals. If you’re staying nearby, tickets are valid for more than one visit so you can keep popping in to enjoy the grounds.