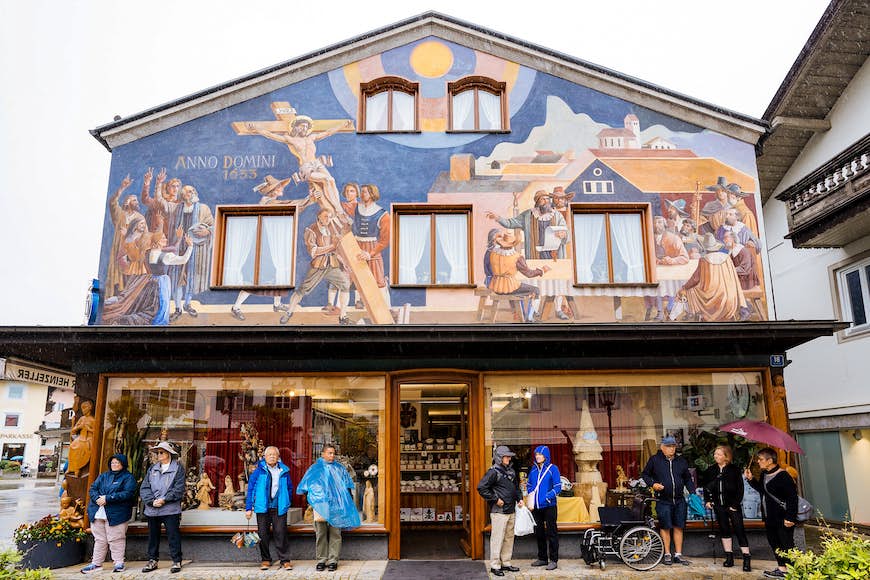 Nearly 400 years ago, the town of Oberammergau made a promise to host a Passion Play every 10 years to fend off the plague. After a different pandemic delayed the latest production, this year’s show is extra special.

When I arrived in Oberammergau on a balmy Saturday evening in May, the town of 5400 in the Bavarian Alps was bustling. Security guards in neon vests directed traffic along the main street as pedestrians meandered between packed restaurants, souvenir stands and shops filled with handcrafted wood statues and biblical scenes. Tour buses shuttled visitors into town from local hotels and guesthouses. And backstage at a pastel-colored theater, hundreds of locals donned long, flowing robes and sorted through piles of prop swords and wooden staffs as they prepared for the second act of the once-in-a-decade Passion Play.

For a few months every ten years, Oberammergau is home to a spectacle that draws the attention of people around the world. The Passionsspiele, or Passion Play, is a 5-hour production depicting Jesus’s life, crucifixion and death. After a two-year pandemic delay, between mid-May and early October nearly half a million people are expected to descend on Oberammergau to sit before its massive open-air stage and take in the play. On the five nights a week the play is performed, the town’s population can be nearly doubled: Hotels here and nearby fill to capacity, and locals rent out space in their guest rooms to meet the demand.

A promise made, a promise kept

This phenomenon is years, or rather centuries, in the making. In 1633, amid an outbreak of the plague, villagers made a pledge to God: If he spared the townspeople from the plague, they would perform the Passion Play every 10 years. For nearly 400 years since, Oberammergauers have kept that promise (and remained plague-free). Back in 2020 should have been its 42nd edition.

I came to Oberammergau to understand how this town, full of fresco-covered houses, about an hour’s drive south of Munich has managed to maintain what’s become known as the longest-running play in the world—and what it’s been like to get back to it after a two-year delay. What I found was a true community effort: Nearly a third of the town’s 5400 residents are in the play in some form, and seemingly everyone else plays an indirect role in managing the chaos that descends on the town once a decade, from restaurant owners and shopkeepers to ticket collectors and firefighters. The play has such an outsize impact on the town that in Oberammergau, people measure their lives not in years but in Passion Plays.

For Christian Gerold, who runs a butcher shop in the center of town that’s been in his family for six generations, this year’s Passion Play is his eighth. (He’s quick to note that he’s not actually that old: there have been two special editions of the play, one in 1977 and 1984, that bring up his count.) Gerold starts work before dawn so he can finish in time to play a member of the high council on stage.

“I’m personally very proud of it: I mean, in my case, my whole family joins in,” he said when I asked him what the play means to him, gesturing to others in the shop lining up sausages behind the glass counter. His two daughters, his two sons-in-law and his three grandchildren are all part of the play this year. “The youngest is just five months old and was on stage on Sunday,” he told me, beaming.

In the days I spent in Oberammergau, I found that Gerold’s story is the norm here. Sitting out to eat one evening, I eavesdropped on a young man sitting a few tables over. I could tell he was in the play from his beard and long hair, since play participants are not allowed to cut their hair or shave for more than a year before the play begins. He was proudly telling a tourist that he was one of two men playing John, and that his father is Pontius Pilate. When I emailed the main press contact for the play, I paused when the name looked familiar—as it turns out, he is one of two men playing the role of Jesus. (It seemed fitting that Jesus, at least in Oberammergau, does his own PR.)

The all-consuming nature of the production is part of why the pandemic, and the subsequent two-year delay, was so devastating for many Oberammergauers. When the news came in March 2020 that Germany was heading into lockdown, actors were months into rehearsals and local businesses had stocked up for the massive influx of tourism about to descend on the town. “From one minute to the next it was all over—it was very strange,” Ursula Mayr, who plays a small role on stage, told me when we spoke in her dressing room one rainy afternoon. “It took a fairly long time before we were allowed on the stage again.”

During the play’s intermission, I spoke with director Christian Stückl at a cafe across the street from the theater, where he held court with friends and admirers alike. Stückl, who in non-Passion Play years runs the Munich Volkstheater, is something of a local celebrity: Playgoers approached us multiple times during our conversation asking for his autograph. “There’s almost nothing like it around the world, that an entire town does theater together,” Stückl said.

This year is Stückl’s fourth time at the helm of the Passion Play. When I asked him how he became interested in the play in the first place, he told me it’s impossible to say because it’s always been a part of his life: “I was seven years old when I was first a part of it. My father and grandfather had big roles, leading roles. I was in the theater every day—as a child, I was always there.”

16 stunning places to visit in Germany

Stückl has also sought to balance the tradition of the play—after all, it’s nearly four centuries old—with the need to modernize it. He worked to rid the script of antisemitism, incorporating Jewish traditions and taking top-billed cast members to Jerusalem before rehearsals begin. And he has also sought to make the play more inclusive: Protestants, Muslims and married women are now allowed to take part.

Cengiz Görür, a 22-year-old actor who plays Judas in this year’s production, is the first Muslim to star in a major role; young children from different parts of the world, who came to Oberammergau as refugees in recent years, are also among the ensemble. “It’s such a big honor to be able to act in such a traditional play,” Görür told me backstage before the show, saying he’s happy to have been accepted by so many people in such a big role. “It’s actually a long time coming: Thirty years ago or more, not everyone was allowed to be part of the Passion Play.”

The 10 best road trips in Germany

Of course, hanging over the whole production is the fact the pandemic is far from over. In the months leading up to this year’s play debut, the whole town waited anxiously to see whether it would indeed move forward: Rehearsals started later than usual due to the winter Omicron wave, and many worried they’d face another delay. Now that the play is underway, there’s always the fear that an outbreak among cast members could take out, for example, both Jesuses at the same time. Each of the approximately 1800 cast members is required to do a rapid self-test before heading on stage. (“We would make a pretty interesting study,” quipped Mayr.)

On my second day in town, I sat in the audience and watched as hundreds of robe-clad townspeople took to the stage, clouds floating in the blue sky above them. The sheer scope of the production was impressive. In between each of the play’s 12 scenes, a choir filled the space with song and at center stage, actors stood perfectly still to create a series of “living pictures.” Although I had come to learn about the play’s impact on Oberammergau, seeing it from the audience was a reminder of the reason so many residents have devoted countless hours of their time to the play: This is what nearly half a million people travel from around the world to see. Knowing all of that – the community aspect and the hard-won chance to host something so central to Oberammergau’s identity – made seeing the production that day feel even more special.

Locals have the same feeling – that this year’s production is extra special. For example, a cast-members-only canteen near the theater normally closes at 11:30 p.m., about an hour after the play finishes. But Eugen Huber, the vice-mayor, said this year people are so reluctant to leave at the end of each night that they’re considering extending the hours. “You can feel it out there: That there’s a real recovery in society,” he told me. “People talk with each other, enjoy the time together, regardless of background and regardless of income. It’s such a connecting element, this play.”

The Passion Play runs until October 2, 2022. Tickets can be purchased online.