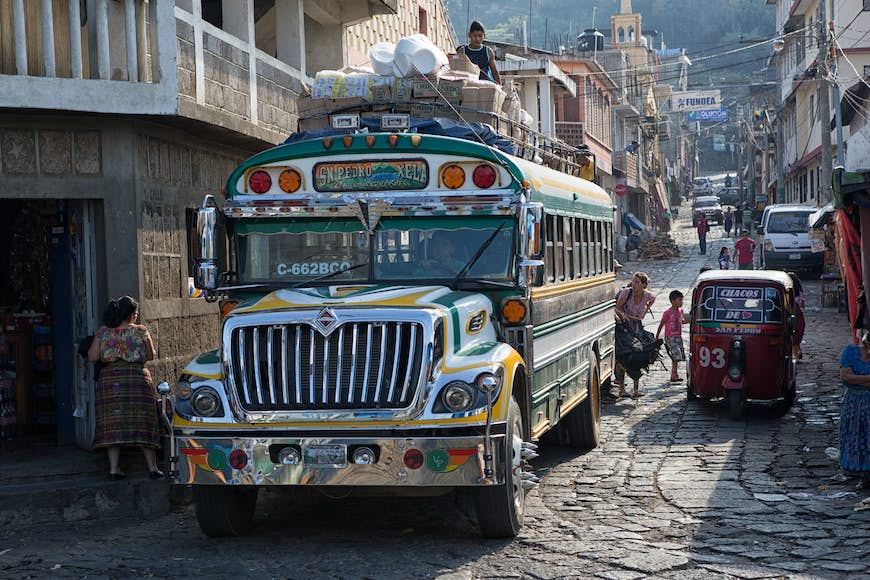 If you’re a budget-conscious traveler looking to explore Central America, start by checking out these money-saving tips.

With seven countries, two endless coastlines and countless attractions, Central America should be a top pick for travelers on a budget, whether you’re on a two-week vacation, a grown-up gap year or an open-ended sojourn and looking to stretch every dollar.

There are always more ways to cut costs, from taking the bus to eating with the locals. The money you save on day-to-day expenses you can then use to splurge on a once-in-a-lifetime experience – perhaps snorkeling with stingrays in Belize, desert island–hopping around Panama’s San Blas archipelago or riding the waves in Costa Rica. Or you could just keep extending your trip.

Make the most out of every adventure with help from our weekly newsletter delivered to your inbox.

While each of Central America’s beautiful countries has unique attractions, some are undeniably more budget-friendly than others. You’ll find the best-value destinations are Guatemala, Nicaragua, Honduras and El Salvador; in each, by staying in a hostel, taking public transport and eating street food you can get by on around $30 a day. Expect to spend double that in Belize, Costa Rica and Panama.

Avoid the high season and the highest prices

Though subtropical Central America is a year-round destination, it’s at its most popular (and expensive) during the hot, dry season from around December to April; expect peak prices over Christmas, New Year’s and Easter. Travel during the hotter rainy season – around May to November – and you’ll dodge the crowds, as well as bag bargains on flights, accommodations and organized tours.

September and October are the wettest months, when heavy rain can make travel on rural roads tricky. Still, since the rains usually come in short-lived afternoon bursts you usually plan around the downpours.

Ditch domestic flights and join the locals on the bus

Domestic flights around Central America can cost more than your international plane ticket. Luckily, though, you can get almost everywhere by bus. “Chicken buses” (repurposed North American school buses) are the most cost-effective – if not the most comfortable – option for shorter hauls. Long-distance bus lines such as Ticabus are the most luxe, if still a steal compared to the plane: the 18-hour bus journey from San José to Panama City costs around $45, a 75-minute direct flight around $230.

Cash is still king in Central America. Credit cards are a necessity for booking flights and accommodation in advance and are accepted in more upscale establishments, but using plastic sometimes carries a surcharge of between 5 and 15%. The US dollar is welcome everywhere – it’s the official currency of El Salvador and Panama – but you can get stung on the exchange rate. Carry small bills and local currency to use at markets and rural areas, and for when the ATM doesn’t work.

Bunk up in a dorm room or stay with a family

In Central America, you’ll find a bed to suit every (modest) budget, from a hostel bunk or a private room (try to negotiate a better rate for longer stays), to lodging with a family with three home-cooked meals a day thrown in.

Ditch beds altogether and sleep in a hammock

You’ll see hammocks slung across verandas everywhere, especially on the coast. Plenty of hostels offer hammocks as a cheaper alternative to a bunk or a bed, and there are hammock shelters in some national parks – including Tikal in Guatemala – where you can sleep surrounded by the rustle and hum of the jungle. You can even pack your own lightweight and compact hammock and string it between two swaying palms of your choice. Just don’t forget the bug repellent.

Eat on the streets

Some of Central America’s best – and cheapest – eats are found on its streets. In Honduras, vegetarian-friendly baleadas (wheat-flour tortillas filled with beans and cheese) make a hearty snack; add scrambled eggs for an all-day big breakfast. El Salvador’s national dish is the portable pupusa (fried corn tortilla). Try one stuffed with cheese and loroco, a native edible flower.

In Nicaragua, look out for nacatamales (steamed parcels of corn dough filled with meat and vegetable) and vigorón (chicharrones, boiled yucca and cabbage salad wrapped in a banana leaf), which will keep you going all day. Follow locals to their favorite stall: if there’s a queue, you know it’ll be clean as well as tasty.

Except for urban Costa Rica, tap water in Central America is generally not safe for drinking. The standard solution is to buy bottled water, but with plastic pollution a huge problem across the region, you can save the environment – as well as some money – by investing in a water-filter bottle before you go. A good option is the LifeStraw Go, which you can fill up from any water source. As you drink, it will filter out any unwanted nasties, keeping you hydrated and healthy.

Thirsty travelers should shun imported beer brands and go for a local lager. Each country produces its own passable brews, including Belikin in Belize, Gallo in Guatemala and Toña in Nicaragua. Hop heads will delight in Central America’s booming craft beer scene, with increasingly creative flavors on tap at breweries in big towns.

For something stronger, award-winning rums from Ron Zacapa in Guatemala and Flor de Caña in Nicaragua means you can sip a happy-hour Nica Libre for a fraction of the price back home. Everywhere in this coffee-growing region, you can expect top-notch caffeination the morning after, too.

Swap the supermarket for the local market

Every town has a market piled high with fresh, seasonal produce – including rainbow-hued mounds of such tropical fruits as granadilla, pitaya and guava – as well as staples like rice and beans. Look for accommodations with a kitchen so you can rustle up your own meals and picnics.

Since tours cost money, be your own guide

There are times when you have to take a tour or use a local guide – volcano boarding down the black ash slopes of Nicaragua’s Cerro Negro, say, or traversing the trails of Costa Rica’s untamed Corcovado National Park. But with a bit of homework – and (ahem) a solid guidebook – there are plenty of sights that you can explore independently, including the ornate carvings of the Copán ruins in Honduras.

There’s no shortage of schools to learn or improve your Spanish, but you can save money by going a bit off the gringo trail. In Guatemala, a Spanish course in the highland city of Quetzaltenango (Xela for short) will be cheaper than in Antigua. With 20 hours of one-on-one tuition for around $180 a week, including a homestay, you’ll be talking like a Guatemalteco in no time, as well as getting a taste of local life.

Island life is more expensive, so head for mainland beaches

There are plenty of island idylls in Central America, with icing sugar–soft white sand lapped by crystalline waters, from the car-free islands of Caye Caulker in Belize and Nicaragua’s Little Corn to the palm-fringed sand circles that make up Panama’s San Blas archipelago. But island life comes with a higher price tag even before the puddle-jumper flight to get there. so with miles of beaches along the Pacific and Caribbean coasts, bus it to a nearby shore instead. As alternatives, consider Placencia in Belize, Playa Maderas in Nicaragua and remote Santa Catalina in Panama.

Take a scuba-diving course in Honduras

The smallest of Honduras’ Bay Islands, heavenly Utila is one of the cheapest – and best – places on the planet to learn to scuba, for newbies and divemasters alike. The average cost of a PADI Open Water course is around $300, though if you shop around the local dive centers you might find bargain accommodation deals thrown in. Note that if you go between March and May, you’ll get the chance to scuba with majestic whale sharks, the gentle giants of the ocean.