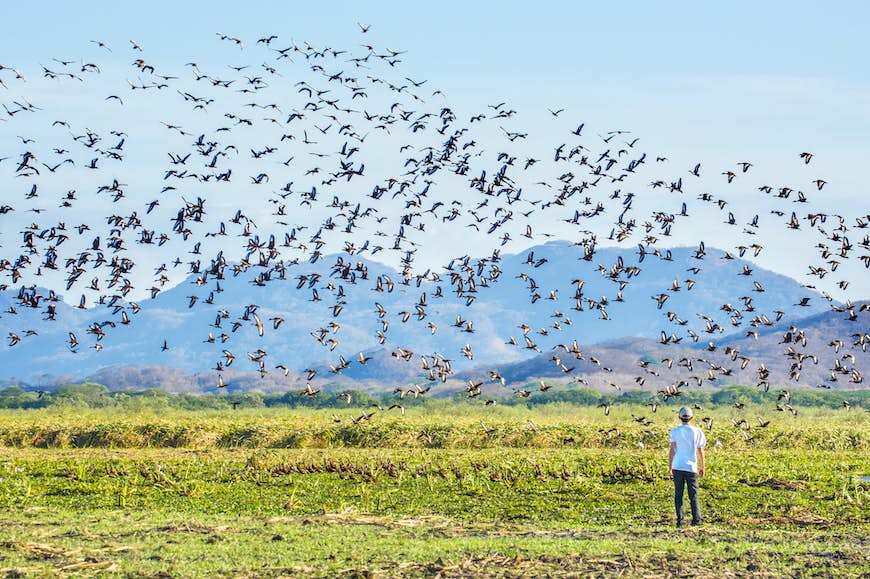 Costa Rica or Panama? Both offer a wealth of wildlife, untamed nature, adrenaline-fuelled activities, and stunning beaches strung along seemingly endless Pacific and Caribbean coastlines. And they may be the priciest countries in Central America but they have the infrastructure to match.

The similar characteristics of these neighboring gems have led to a good-natured rivalry, from the soccer field to coffee cupping. So, in that friendly spirit of competition, let’s see how these two countries stack up.

Whether you want to snorkel with rainbow-colored fish, ride the waves or just lounge on icing sugar-soft sand, you’ll find breathtaking beaches stretching along two coastlines in both Panama and Costa Rica.

The country is blessed with some spectacular strips of sand, a staggering 140 of which have Blue Flag status (an internationally recognized sustainability certification).

The picture-perfect beaches of the Nicoya Peninsula include the hip surfing hangout of Santa Teresa, famed for its powerful beach break; Samara, popular with locals and visitors for its calm, safe waters; and the blissfully secluded (and just a few minutes from Samara) Playa Barrigona. In Guanacaste, Playa Hermosa named Central America’s first World Surfing Reserve for its biodiversity and conservation ethos, also offers some world-class waves.

Panama has a beach to suit every mood. To catch a wave, head to laid-back Santa Catalina on the Pacific Coast or check out the volcanic-sand beach of Playa Venao on the bucolic Península de Azuero. For a taste of tropical island life, head to the Pacific’s paradisical Pearl Islands or the Caribbean’s Bocas del Toro, to snorkel in the gin-clear waters around Isla Bastimentos before chilling over a piña colada or two.

But for a real castaway feel, you can’t beat the San Blas (Comarca de Guna Yala) archipelago, home to the indigenous Guna people, where there’s a palm-fringed, pocket-sized island for every day of the year.

The winner: Panama, thanks to its idyllic islands, but those in search of a beach break will be spoilt for choice in either country.

Both countries teem with endemic species and protected spaces, from mist-wreathed cloud forests to steamy rainforests and fish-filled marine parks.

Costa Rica is a wildlife wonderland with 30 national parks (and counting), not to mention dozens of wildlife refuges and reserves, with protected areas covering more than 30% of its landmass.

The lofty cloud forest reserves of Monteverde are a hotbed of biodiversity, buzzing with birds, amphibians and reptiles, and the “mini-Amazon” of Parque Nacional Tortuguero on the Caribbean coast is a protected breeding ground for green sea turtles. The wild and wonderful Parque Nacional Corcovado on the Osa Peninsula is home to tapirs, scarlet macaws and elusive pumas, while the Golfo Dulce is the place for whale and dolphin spotting.

Dive with schools of hammerhead sharks and those gentle giants, whale sharks at Isla del Coco located in the southern part of the country, near Península de Osa.

This skinny isthmus linking Central and South America is a nature lover’s paradise. Between June and December, thousands of olive ridley sea turtles lay their eggs on the beaches of Isla Cañas. Between July and October, humpback whales visit the Golfo de Chiriquí to give birth around the underwater utopia of Isla de Coiba off the Pacific coast.

On dry land, bird watchers flock to the cloud forest trails around Boquete to search for the elusive resplendent quetzal. More than 400 bird species have been spotted along Pipeline Road in Soberanía National Park, located in the Canal Zone.

And you don’t have to leave Panama City to spot sloths and other wild things along the rainforest trails of the Parque Natural Metropolitano.

The winner: Costa Rica – it’s a world leader in conservation. No wonder the Ticos’ motto is pura vida (pure life).

Thrill-seekers and outdoor enthusiasts will find everything from soft adventure to extreme sports in both Costa Rica and Panama.

The country’s home to the original canopy tour and there are plenty of zip lines that’ll give you a monkey’s eye view, sending you speeding – and screaming – over the forest or around Arenal Volcano. The Pacuare River, located nearly 124km (77 miles) from the capital of San José, is a renowned white water rafting spot, with rapids ranging from Class II to Class V.

Back on dry land, take a three-day round-trip hike up the country’s highest peak Cerro Chirripó. If you get to the summit before the mist falls, you’ll have views over the Pacific Ocean and the Caribbean Sea at the same time.

Boquete in the Chiriquí Highlands is the hub for hiking, white water rafting, kayaking, rappelling and rock climbing. You can slog to the summit of Volcan Barú for a spectacular sunrise or take an adrenalin-fueled canopy tour, zipping at breakneck speed over its forested slopes.

Hardcore hikers can strap on their boots and trek coast-to-coast from Panamà Viejo to Portobelo or through the primordial forest of Darién with Jungle Treks. Experienced divers can scuba in shark-infested waters off the former penal colony of Isla Coiba. Look out for curious capuchin monkeys as you kayak around Gatún Lake or watch behemoth ships crossing the Panama Canal.

The winner: Costa Rica for the sheer variety of outdoor adventures on offer.

There’s plenty for coffee aficionados to celebrate with both countries producing first-class beans.

Thanks to its multitude of microclimates, Costa Rica has not one but eight high-altitude regions, particularly in the Central Valley and Guanacaste, that produce coffee, each with its own distinct flavor.

Beans are hand-picked, and it’s the only country in the world where it’s illegal to produce anything other than top-notch 100% Arabica beans.

Panama’s coffee estates are set around its three volcanoes, Volcán Baru, El Valle and La Yeguada, with soil enriched by volcanic ash and cooled by breezes that blow in from both the Caribbean and the Pacific coasts.

The best beans are grown around Boquete, including Geisha, one of the world’s finest coffees thanks to its singular taste. The Lamastus Family Estates produces the top-rated Elida Geisha Green Tip, which broke the world record for the most expensive publicly auctioned coffee at USD$1029 per pound. If you can’t tour the estate, sample a cup at the Sisu Coffee Studio, the family’s industrial-chic cafe in Panama City, for around $9.

The winner: Panama narrowly takes it, thanks to the legendary Geisha.

Best country for lovers of culture

Both countries have a rich cultural history, expressed through arts and crafts, music, and cuisine.

Whilst it’s tempting to bypass the urban jungle and head straight for Costa Rica’s wildlife-rich forests, if you have time in San José spend it exploring a few of its stunning neighborhoods.

Start off by enjoying the architectural splendor of historic Barrio Amón or head to Barrio Escalante, the city’s gastro hub with its Saturday morning farmers market and an outdoor food court created from repurposed shipping containers. The state-of-the-art Jade Museum, with five floors filled with age-old jade artifacts and more, is worth a look, as is the glittering collection at the Pre-Columbian Gold Museum.

Panama City is Central America’s most cosmopolitan capital with no shortage of things to do, from the landmark BioMuseo showcasing the country’s biodiversity to the compact Museo de la Mola exploring the indigenous Guna’s one-of-a-kind textile art.

Getting up close to the engineering marvel of the Panama Canal is on many visitor’s bucket lists and you can check out its turbulent history at the interactive Miraflores Visitors Center. The Panama Canal Museum sits in a preserved colonial mansion in Casco Viejo. Just a 10-minute drive north is Afro-Antillean Museum, which celebrates the scores of West Indian laborers who worked on the canal.

The winner: Panama for its buzzy capital and world-famous waterway.