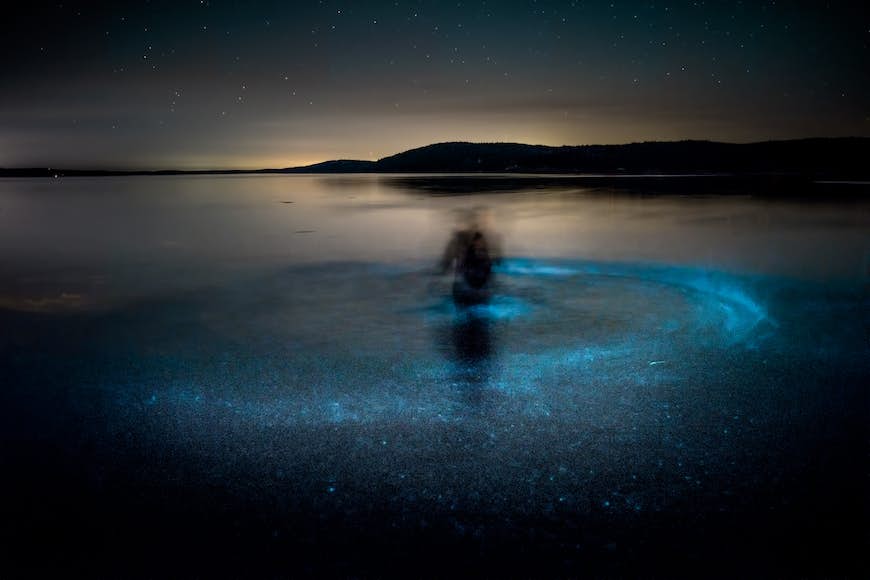 The natural world is full of wonders, but is there anything more mesmerizing than things that glow?

No matter where you are, you’re probably close to some of these sparklers, so here’s a round-up of our favorite places to go for the glow.

The still waters of Garrison and Westcott Bays, just off San Juan Island, are the setting for a spectacular light show in Washington State. These nutrient-rich bodies of water create an environment that fosters bioluminescent microorganisms – a natural attraction that travelers flock to once the sun has set.

Post-glow activities: Grab a pint at San Juan Brewing Company. The next day, check out the wildlife and the lighthouse in nearby Lime Kiln Point State Park.

A first-timer’s guide to the San Juan Islands: Everything you need to know before you go

When most people think of Cambodia, Angkor Wat springs to mind. In the southern part of the country near Sihanoukville is another epic experience: Koh Rong, an island where you can snorkel in sparkling bioluminescent waters. Book a boat tour that will take you out on the water, and be sure to swirl your hand through the water to see the plankton at their brightest.

Stay at Long Set Resort, which gives guests a shoreline view of the twinkling colors lighting up the sea.

Post-glow activities: Mountain bike through the forest or take an ocean dive to view marine wildlife.

In Mexico, Oaxaca’s Manialtepec Lagoon is known for its bioluminescent light show. While you can stay in the boat, jumping in is encouraged. In ancient times, the locals believed in the youthful magic of bathing in the phosphorescent lagoon. Just be sure to time your nighttime dip with the new moon, as light makes it challenging to see the bioluminescence.

One of the most iconic examples of bioluminescence, the otherworldly glowworms of New Zealand’s Waitomo Caves make even the most experienced naturalists stop in their tracks. In a striking display, the worms dangle from stalactites reaching down from the caves’ ceiling, blanketing the surface in a bright blue glow.

Visitors can book a number of tours, including the main Glowworm Cave, at the nearby visitor center.

Post-glow activities: Once you get your fill of the glittery critters, head over to the Ruakuri Caves and Bush Scenic Reserve and walk the trail loop, taking in views of the rocky gorge and limestone formations.

Can I hike New Zealand’s Great Walks? Your guide to the newly-reopened treks plus a new hike coming soon

Puerto Rico is home to three bioluminescent bays, the most spectacular of which is Mosquito Bay on Vieques, a small island off the east coast. Mosquito Bay has long held the title of the brightest bioluminescent spot in the world, and for good reason – millions of single-celled organisms called dinoflagellates glow bright blue when disturbed, creating a mind-blowing spectacle for those who venture out on the water via kayak. Watch fish jet out from under your boat like shooting stars, and elect for a glass-bottomed kayak to pretend you are in warp drive as you glide across the surface. Note that the phenomenon is notoriously difficult to capture on camera, so just enjoy the magic instead.

The glow was somewhat dimmed after Hurricane Maria, but the sparkling waters have bounced back to pre-hurricane levels. For the best view, book your trip on a new moon.

Post-glow activities: After soaking up the night-time magic of the bay, take advantage of the Caribbean sun – head to the mile-long golden arc of sand at Sun Bay to take in some vitamin D and admire the turquoise sea.

You can spot fireflies in humid regions around the world. However, the Smoky Mountains are home to 19 different species of them, including the synchronous firefly. As one would expect given the name, these blinking bugs have a little trick up their sleeves ­– for a two-week period from late May to mid-June, they flick on and off in unison.

Evening access to this region of the park during prime firefly season is a hot ticket, and the park runs a lottery to avoid overcrowding.

Post-glow activities: Stick around the national park for another day and head south on the winding mountain roads to nearby Clingman’s Dome, the highest point in the Smoky Mountains at 6643ft (2024 meters). On a clear day, the peak offers views that stretch nearly 100 miles.

How to spend a weekend in Franklin, Tennessee

Tucked away in a rural corner of Northern Alabama you’ll find Dismals Canyon, a National Natural Landmark home to the oldest accessible primeval forest east of the Mississippi River (ie a forest that has existed without any significant event, such as a fire or storm, affecting its growth). The canyon is a twisting ravine full of majestic flora and an array of wildlife, including the quirkily named Dismalites – glowworms.

These tiny worms line the moss-covered rocks of the canyon, and when night falls, they glitter blue in the darkness. The best time to catch the Dismalites is May through September, and you can book a guided tour with the canyon’s conservatory.

Post-glow activities: Spend the evening at one of the canyon’s cabins, and drive about an hour east the next morning to the Sipsey Wilderness, a section of the Bankhead National Forest that contains waterfalls, walking trails, horseback riding trails and canoeing routes. Motorized vehicles aren’t allowed within the wilderness boundaries, so sit back and enjoy nature at its purest.

This lagoon, which stretches along the marshlands near Falmouth, has a captivating history: During the 18th century, it was a vital port for the sugar trade between England and Jamaica. Today, the lagoon is a key location for one of the most spectacular sites in the Caribbean: microscopic organisms that glow in the shallow, warm waters.

There are a number of tours you can book in Falmouth or with hotels in Montego Bay, about 30 minutes away. The tours encourage visitors to swim in the lagoon for the best effect: The microscopic organisms produce a blue glow when disturbed.

Jamaica’s essential things to do, from the Blue Mountains to jerk pork

Glowing animals aren’t the only ones to shine – the bioluminescent mushrooms on Japan’s island Hachijō-jima make you feel like you are Alice in Wonderland. During the rainy season (which lasts from May to September), over seven different species light up the island’s forest floor. Hit the hiking trails or head to the botanical gardens to get a closer look at the fluorescent fungi.

This article was first published September 17, 2018 and updated about 9 hours ago