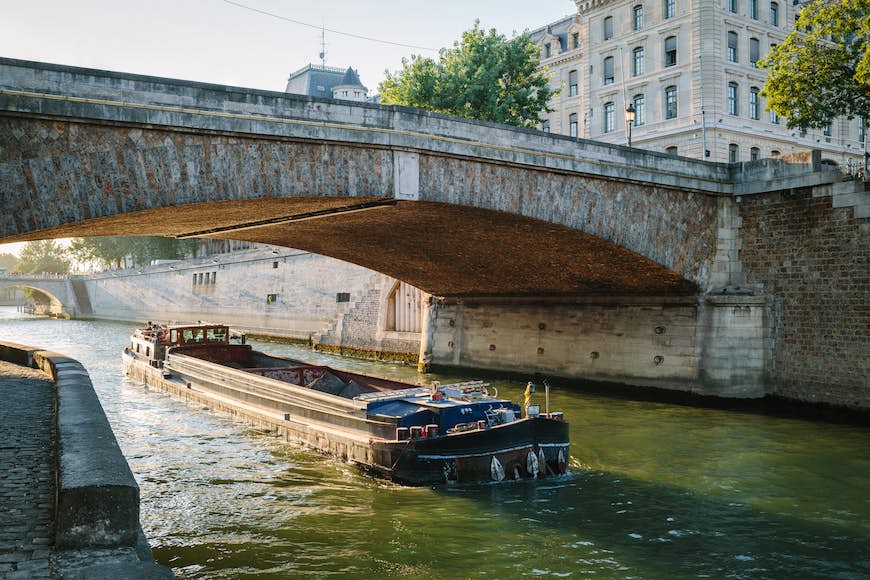 Glittering monuments, medieval villages, rolling vineyards, soaring peaks, pounding surf… France has it all, and so much more it’s hard to know where to start. Find out how to get the most out of your visit with 15 of the very best things to do in France.

Cruise through the heart of Paris

Flowing through central Paris, the Seine is flanked by many of the French capital’s most emblematic sights. Whether it’s day or night, when the river’s ripples reflect the illuminated monuments, getting out on the water sees first-time visitors fall for Paris’ charms and return travelers – and even locals – rekindle the magic.

Less touristy and more flexible than standard sightseeing cruises, the Batobus makes a 1¾-hour loop. All-day passes let you hop on and off as often as you like at its nine stops: the Eiffel Tower; Invalides military complex (and the city’s most beautiful bridge, Pont Alexandre III); Musée d’Orsay, with impressionist, post-impressionist and art nouveau masterpieces; the chic cafes and boutiques of St-Germain des Près; Notre Dame cathedral; Jardin des Plantes (botanic gardens) bordering the Latin Quarter; Paris’ city hall, the Hôtel de Ville (adjoining Le Marais’ hip bars and restaurants); the rambling Louvre, showcasing antiquities and art including the Mona Lisa; and the luxury-shop-lined Champs-Élysées, home to the Arc de Triomphe. It’s the ultimate ticket to Paris.

Breathe in the scent of Provence’s lavender fields

In the south of France’s sun-drenched region of Provence, lavender blazes violet-blue from June to August, peaking in July. Driving along Les Routes de la Lavande (Lavender Routes), open your car windows to let in the perfume from the rows of fragrant flowers upholstering the countryside like corduroy.

The best place to learn about lavender’s history, harvest and production is at eco-museum Musée de la Lavande in the picturesque Luberon; book ahead for workshops (such as painting with scented watercolors) and bring ingredients from Provence’s markets for a picnic.

Idyllic locations to snap a quintessential photo also include Abbaye Notre-Dame de Sénanque, a 12th-century abbey framed by lavender; the blooming fields around the honey-colored village of Sault; and farms and distilleries on the Valensole plateau, beneath the scoured limestone summit of Mont Ventoux.

Southwest of Paris and surrounded by vineyards, the sumptuous castles and aristocratic estates in France’s Loire Valley make up a giant Unesco World Heritage site that’s even more spellbinding when viewed from the air.

France’s Montgolfier brothers invented the montgolfière (hot-air balloon) in the 18th century, and more recent forms of transport still can’t compete with drifting with the wind while soaking up the views in, other than the hiss of the burner, blissful silence. From April to October, when flying conditions are best, companies such as France Montgolfières operate balloon flights in the Loire Valley just after sunrise and before sunset, with a celebratory toast upon landing.

With ribbons of stone-walled vineyards first planted by Romans and tended by monks from the local abbeys, bucolic Burgundy (Bourgogne in French), to Paris’ southeast, is synonymous with the wines that accompany regional specialities like snails, poultry, beef, truffles, mustard, cheeses, blackcurrants and gingerbread.

Burgundy’s capital, Dijon, is a perfect place to dive in: the Unesco-protected “French gastronomic meal” is the centerpiece of the 2022-opened Cité Internationale de la Gastronomie et du Vin  (International City of Gastronomy and Wine), which sprawls over 16 acres (6.5 hectares). Whet your appetite at its array of exhibitions, shops, wine-school and cookery classes, and satiate it at the array of restaurants and spectacular wine bar. South from Dijon, some of the world’s most famous vineyards unfold along the Route des Grands Crus.

Wandering through ornate gardens on summer days as plumes of water leap and splash to dramatic baroque music transports you back to the French monarchy’s glory days at the Château de Versailles.

France’s most opulent palace was built for King Louis IX on the site of his father’s hunting lodge, 13 miles (22km) southwest of Paris in the mid-17th century by the finest architects and artisans of the day. Louis XVI and his queen Marie-Antoinette later reveled in its excess, until the French Revolution ended the party and they were guillotined.

On summer Saturdays, you can relive that lavish lifestyle with a “Royal Serenade” tour in the palace’s glimmering Hall of Mirrors. Reserve ahead for these and other seasonal events, such as night-time shows with torches, candles and fireworks illuminating the gardens. The palace and grounds can be toured year-round.

Schussing through fresh powder reaches its zenith at Les 3 Vallées. Over a vast natural playground covering upwards of 111,197 acres (45,000 hectares), with 373 miles (600km) of ski runs, a cumulative 203,412ft (62,000m) of vertical drop and boundless freeriding opportunities, this is the largest ski resort in the world. And its altitude means the snow season stretches from November into May (outside of which, the hiking and mountain biking are epic).

Ride the waves in and around Biarritz

On southwestern France’s Atlantic coast, Biarritz’ belle époque villas, striped beach tents, and ritzy cafes, restaurants and spa hotels retain a cachet from Napoleon III’s holidays here. But you’re also as likely to see surfers’ vans trawling the coast on the lookout for legendary waves in what is now the surf capital of Europe.

Breakers roll in to the golden sweep of sand at Biarritz’ main city beach, Grande Plage. Beyond the 19th-century lighthouse to the north, Anglet’s line-up of 11 beaches extending more than 2.5 miles (4km) are renowned for their consistent swell and powerful barrels.

North again, Capbreton and Hossegor host major international competitions. Surf schools (choose one with Féderation Française de Surf (FFS) registration) can get you out on the waves – and above them, with awesome conditions for kitesurfing.

Beneath Épernay’s elegant streets, a staggering 200 million bottles of bubbly are aged in a maze of more than 68 miles (110km) of chilly chalk cellars. Delve below ground on tours of famous Champagne houses, including Mercier, Moët & Chandon and De Castellane.

Retrace the footsteps of medieval pilgrims to Mont St-Michel

Like a mirage appearing across the shimming sand – or rising from the sea at the speed of galloping horses, thanks to Europe’s highest tidal range of up to 49 feet (15m) – the extraordinary abbey-island of Mont St-Michel sits off the coast of Normandy in northwestern France. Fortified during the Middle Ages, the turreted, spire-topped abbey still sees Benedictine monks hold services here most days.

Arriving at Mont St-Michel is something of a pilgrimage itself, as you cross the causeway by maringote (horse-drawn carriage), motorized shuttle or on foot (steep steps on the island are unavoidable). For the original pilgrim experience – and an up-close appreciation of the bay’s natural environment, including 130 different bird species – walk barefoot across the bay with an accredited guide at low tide.

Visit the birthplace of cinema in Lyon

France’s third-largest metropolis, at the confluence of the Rhône and the Saône Rivers in the country’s southeast, Lyon has long been a creative hub. In 1895, brothers Auguste and Louis Lumière shot the first-ever motion-picture reels of workers leaving their photographic-plate factory, La Sortie des Usines Lumières (Exit of the Lumières Factories).

Across from the original “Hangar du Premier-Film” (“First Film Shed”), preserved as a historic monument and integrated into a contemporary screening center, is the family’s beautiful art nouveau villa, where museum exhibits include the brothers’ Cinematograph and other inventions and equipment that brought the magic of cinema to life. The gardens are a venue for Lyon’s Festival Lumière each October, with more screenings, events and ceremonies around the vibrant city.

Shrouded in the mists of Celtic history in northwestern France, Carnac in Brittany is home to the greatest concentration of megalithic sites anywhere on earth.

Probe their origins at the Maison des Mégalithes, and pedal across the windswept landscape featuring more than 3000 menhirs (standing stones), dolmens (capstone tombs) and tumuli (grave mounds) dating from Neolithic times (estimated to be between 5000 and 3500 BCE), making them older than Stonehenge.

Pick up bikes (traditional or electric) from a handful of outlets around Carnac. Access is restricted in the busy summer months, but in any case, the ancient alignments are at their most mystical in the early morning or approaching dusk on winter days.

Marvel at Matisse’s artistry on the Côte d’Azur

Stroll alongside Nice’s pebbled beach on the palm-lined Promenade des Anglais almost any time of year, and you’ll see why the glorious French Riviera light drew artists such as Renoir, Picasso and Henri Matisse.

At the Genoese villa housing Nice’s Musée Matisse, you can get an intimate perspective of his paintings, drawings and prints, cut-outs and sculptures, and visit his grave across the park.

For the most ethereal example of Matisse’s work, head 20 miles (32km) east to Vence, where seeing sunshine filter through the stained-glass windows of the chapel he designed, the Chapelle du Rosaire, is a profoundly spiritual experience.

From Collias in southern France’s Languedoc, a 1½ -hour-or-so paddle by canoe or kayak takes you along the winding Gard past sunflower fields, rock formations and extraordinary Pont du Gard. A legacy of the Romans from circa 19 BCE, this three-tier, 52-arch aqueduct once transported water from Uzès to Nîmes. Its enormous size becomes even more apparent looking up from underneath.

Canoeing is possible from March to October, but in spring and early summer, the water level can be high and the current strong; late summer and autumn are prime. To save the return journey, Collias’ rental outfits can collect you a further half-hour downstream.

Hike up Puy de Dôme to survey the volcanic landscape

Deep in central France, you can sense the landscape’s evolution in one of the country’s wildest and most remote natural regional parks, the Parc Naturel Régional des Volcans d’Auvergne.

For an easier alternative, board the Panoramique des Dômes cog railway for a 15-minute trip. To get up even higher, spiral above Puy de Dôme on a paragliding flight.

Ring in the festive season at Strasbourg’s historic Christmas market

While Strasbourg is as pretty as a picture in summer, when geraniums spill out the half-timbered buildings’ window boxes in canal-laced Petite France, the lovely Alsatian capital in northeastern France is even more enchanting come Noël. Dating back to 1570, its Christkindelsmärik is the oldest Christmas market in France and one of the oldest in Europe.

From late November to late December, hundreds of stalls selling handcrafted toys, steaming mulled wine and bredle (Christmas cookies made with spices such as cinnamon) set up around Strasbourg’s 15th-century Gothic cathedral. Place Kléber’s 98ft (30m) Christmas tree from the nearby Vosges mountains is strung with decorations, and twinkling lights throughout the city create a winter wonderland.