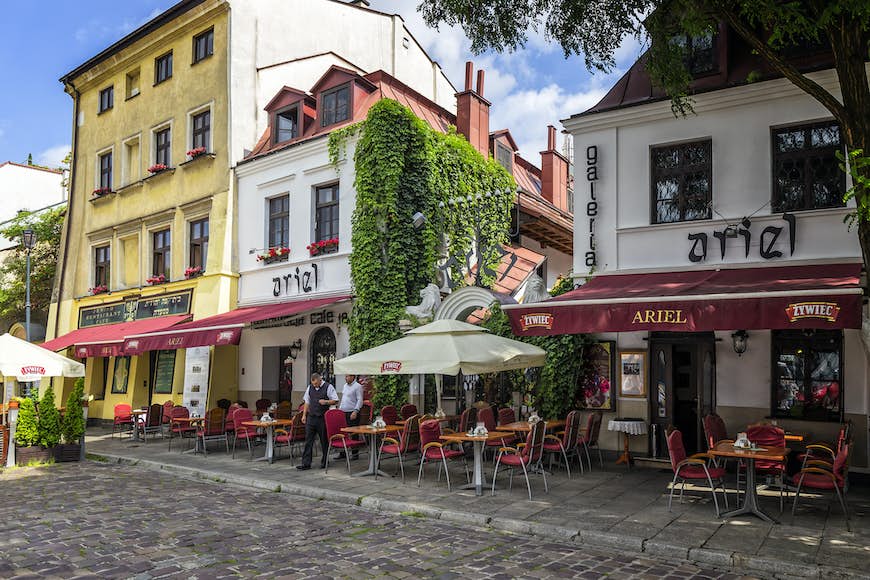 Let’s be honest, you’re in Kraków to see the breathtaking market square, probably Europe’s largest and certainly its prettiest. This 16th-century canvas of churches, palaces and aristocratic mansions is best admired while sipping a Tyskie beer on the ancient cobblestones. Yet Kraków is more than this famous fairytale view.

Few cities better tell the drama and dreadfulness of recent European history. In the former Jewish neighborhood of Kazimierz, there is history, hope and an awful lot of good food, while the model town of Nowa Huta offers a step back to the Cold War. Here’s our guide to finding the best Krakow neighborhood for you.

The Rynek and Old Town

Best for sights, hotels and an alfresco drink

Nearly all of Kraków’s incredible collection of sights are crammed into the Unesco-protected Old Town. Centered around the Market Square (Rynek) the Old Town takes less than 20 minutes to walk end to end, but still includes the blockbuster attractions of Wawel Castle, St Mary’s Basilica and the Cloth Hall.

The Old Town is a city within a city, primarily (although not exclusively) catering to tourists. Most restaurants, bars and hotels are here. For first-time visitors, it’s your best base: After all, when you’ve come all this way to see the Old Town it makes sense to stay in it. The three- and four-star hotels just off the Rynek are an absolute bargain by European standards – just avoid those near bars because of the noise. The excellent Hotel Grodek attached to a monastery will do the trick (rooms for under US$120).

Of the hundred-plus places to eat in the Old Town, you’ll want to avoid at least 80 of them. The Rynek in particular is bulging with tourist traps that serve below-average food at above-average prices. But don’t write the whole neighborhood off. South of the square, you’ll find Kraków’s best modern Polish restaurants. Try Kogel Mogel for a busy, bistro-like atmosphere and award-winning, but unfussy interpretations of classic Polish dishes.

By night or at least weekends, the Rynek can be raucous. It’s fun, to a point, but often marred by stag and hen dos. Do yourself a favor and walk a few streets back to find a better crowd and better bars. Head to ul. Stolarska for lounges, like Pierwszy Lokal and Tram Bar, that open late and are good enough to draw a local crowd.

Do make time for one daytime drink on the Rynek. When the sun is shining there is no better place to be than sitting on the terraces that skirt the square. Most establishments are average at best and overcharge for the view, but what a view it is.

First and foremost Kazimierz was once one of Europe’s biggest and most celebrated Jewish communities; until the Nazis invaded. The community’s heartbreaking history is on every corner, from the handful of still operating synagogues and talks in the Jewish Community Centre by Holocaust survivors to the smashed tombstones in the cemetery.

This history was also the launchpad for Kazimierz’s recovery. There are now schmears in Bagelmama, cholent in Dawno Temu Na Kazimierzu and kosher wine at petite terrace cafes. The area’s unloved tenements also attracted beatnik bars, a welcome alternative to the picture-postcard Old Town. Today they’re professionally run and purposefully shabby chic, but the appeal still works. Some 20 years on, the bars and independent boutiques like Mapaya and galleries like Galerie d’Art Naïf on intimate streets still make this Kraków’s most interesting neighborhood.

Just across the river from Kazimierz, Podgórze has been touted as Kraków’s “up-and-coming hip” neighborhood for so long that it must be nearly ready for retirement. It has gentrified, but gently with long-term families that make the place feel welcoming living alongside artists that give it that arty reputation.

To see “hip” Pódgorze head for the bistros by day/cocktail clubs by night on the riverfront or discuss the pros and cons of conceptualist art with the on-trend crowd at Krako Slow Wines next to the Museum of Contemporary Art Kraków.

Podgorze’s history alone makes it worth a visit. It was here the Nazis built Kraków’s Jewish Ghetto, as portrayed in Schindler’s List (which was filmed in Kraków). On Plac Bohaterów Getta empty steel chairs sit in memory of the Jews pushed into cattle cars bound for nearby Płaszów or Auschwitz, while Eagle Pharmacy on the corner is now a museum recounting the efforts of chemist Tadeusz Pankiewicz who risked his life to smuggle medicine and shelter Jews. Down the road, the former Oskar Schindler Factory is now given over to a moving museum detailing the life of residents in Kraków during the war.

Best for a more local experience

The districts immediately ringing the Old Town tend to get overlooked by tourists that shuttle between it and Kazimierz, but here you’ll find a more lived-in local Kraków. The small streets of low rise, 19th-century tenements and townhouses are a handsome setting for vegan restaurants catering to students from nearby Jagiellonian University – Kraków’s most prestigious – and a few bars that successfully tread the line between cool and couldn’t care less.

The corner of Krupnicza and Dolnych Młynów is the heart of the neighborhood. Sadly the Tytano complex of bars, clubs and art galleries inside a former Austro-Hungarian tobacco factory that confused visitors still hunt for has been closed for redevelopment. Drown your sorrows with cheesecake in the pretty greenhouse in Pojnarówka coffee shop or a beer and Central European-sized cuts of meat at Kufle i Widelce.

Best for the bunkers, concrete and communism

You can’t quite claim there is nowhere else on earth like Nowa Huta because Magnitogorsk in Russia was also built to be a Socialist Realist workers’ paradise – the pair were the only Stalinist new towns fully completed.

Stalin square may now be Ronald Reagan Square, but Nowa Huta still offers a step back into the Cold War; wide avenues draped in trees and modeled on Paris and grand Le Corbusier-inspired blocks with flashes of Renaissance style. You can also visit nuclear bunkers built for residents at Nowa Huta Underground.

Nowa Huta is now a working-class Kraków suburb and easily reached by tram, but you’ll get more from a trip on an organized tour – like stories of battles with the communist authorities over churches, living conditions and Solidarność.