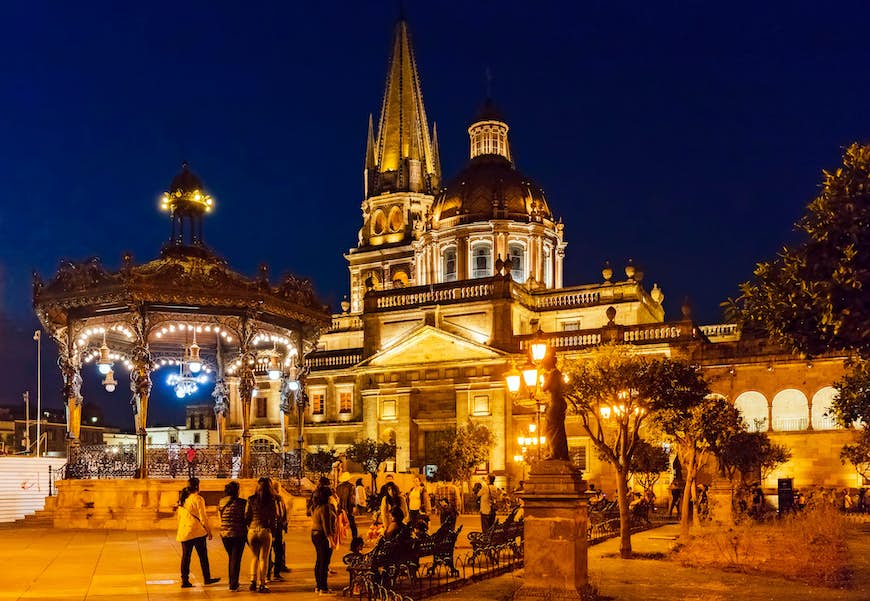 One of the oldest and largest cities in Mexico, Guadalajara is a dynamic metropolis made up of dozens of neighborhoods, each with their own vibe and appeal, and all connected by a robust public transportation system.

Most neighborhoods are centered around a bustling church plaza, ringed with colonial-era buildings, yet with modern skyscrapers almost always in view. Guadalajara’s main historic sights are in the city center and are easy to see in a day or two. Stay for a long weekend to explore further afield, to catch a show or market day, and to get a deeper appreciation of daily life in this quintessential Mexican city.

Stay in Centro Histórico to be near the sights

The Centro Histórico (aka El Centro) is the heart of Guadalajara, the site of the city’s founding 500 years ago. This is the place to meander sweeping plazas and pedestrian corridors, taking in the fountains and public art that sit alongside baroque, neoclassical and gothic buildings like the golden-spired Catedral and Palacio de Gobierno. Don’t miss the Instituto Cultural de Cabañas, a Unesco World Heritage site decked out in murals by master painter José Clemente Orozco.

Most evenings, street performers appear and musicians take to the bandstand in Plaza de Armas, filling the air with music, food vendors circling the crowd. For sit-down entertainment, join tapatios (people from downtown Guadalajara) at Teatro Degollado for symphony concerts or instead beeline to Arena Coliseo for lucha libre (Mexican wrestling).

Beyond the sights, El Centro is a living breathing neighborhood, where shoe-shiners do brisk business while small children chase balloons nearby, where bakeries are tucked between bridal shops, and where Mercado San Juan de Dios sells not just souvenirs but sides of beef too. Midrange and budget hotels abound, many facing congested streets and sidewalks busy with office workers. If you can swing it, spend a little extra to stay at one of the nicer (read: quieter) hotels like Real Maestranza or Del Carmen Concept Hotel.

Colonia Americana has the best restaurants

Just west of the Centro Histórico, Colonia Americana is its boho-hipster counterpart. This is home to the University of Guadalajara, the streets a beehive of students, faculty and every day tapatíos. The neighborhood serves as a good base camp, with small hotels, homes-turned-hostels and upscale B&Bs scattered throughout.

The neo-Gothic Templo Expiatorio is the neighborhood’s striking focal point, and the plaza around it is a popular hangout. Rows of food carts appear most evenings, selling everything from tacos and elote (corn in a cup) to Nutella-stuffed crepes. It feels like a house party, everyone welcome.

Enjoy watching plaza life go by from a bar in Zapopan

Zapopan’s cobblestoned Plaza de las Américas is the main draw of this upscale suburb, perfect for an afternoon jaunt from downtown Guadalajara. Here sits the impressive Basílica de Zapopan, home to La Zapopanita, a medieval icon that has inspired some of Mexico’s largest pilgrimages, millions arriving on their knees every October 12. Tour the church and check out the nearby museums: Museo de Arte Huichol, a dated but well-conceived museum about the Huichol people; and Museo de Arte de Zapopan, with ever-changing contemporary art exhibits.

Afterwards, stop for refreshments at one of the restaurant-bars along the pedestrian corridor – they’re touristy but the view of the plaza can’t be beat. For a real deal meal, walk a block to Calle Javier Mina where Fonda Doña Gabina Escolatica serves up some of the best pozole in town. If you’re here on a Friday or Saturday evening, don’t miss the impressive light and sound show that’s projected onto the Basílica.

Tlaquepaque is like a colonial village with its cobblestone streets and pastel-colored facades transporting you to another time. The main square, Jardín Hidalgo, is lush with blossoms with the ironwork benches often claimed by young couples and families. Voladores (“flying men” from Papantla) give spectacular performances from a special 30m-high (100ft) pole most afternoons; free concerts and other events are regularly held here on weekend evenings too. Nearby, don’t miss the sublime Museo Pantaleón Panduro, one of the region’s best folk art museums.

From the plaza, the pedestrianized Calle Independencia is lined with high-end boutiques like Antigua de México and Del Corazón de la Tierra. Equally chichi restaurants are woven through the neighborhood – Casa Luna is a local fave offering gourmet Mexican in a hacienda-like setting. Street food vendors are never far off though, and nearby El Parián is the go-to for drinks, where live mariachis perform night and day.

Tlaquepaque also has a small collection of boutique hotels, guest houses and even hostels with colonial features. With downtown Guadalajara just a quick metro ride away, it’s perfect for travelers craving small-town charm with easy access to big city sights.

Tonalá has the best shopping at its outdoor market

To the southeast sits Tonalá, a working class suburb known for its resident artists and massive outdoor market. Market days bring hundreds of vendors to the streets, selling all manner of folk art and home goods. The labyrinthine market can take hours to explore; fortunately, countless torta (sandwich) and taco stands are an oh-so-tasty reason to take a break. But if that all seems like a bit much, come on an off-market day instead; the winding streets brim with family-run stores, workshops and warehouses, often where the best pieces can be found.

For a curated experience, Tonalá’s tourist office offers bilingual walking tours of artist studios (by donation, reservations required); a stop in the memorable Museo Nacional de Cerámica is often included. Whatever the experience, Tonalá is a shopper’s paradise – almost anything you can buy in the city’s high-end boutiques, you can find here for much less.