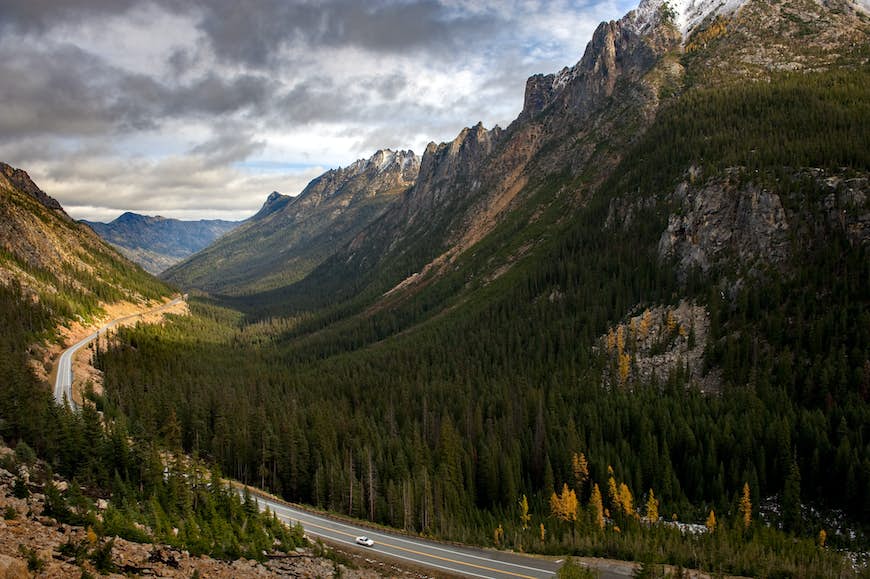 Checked the gas prices? Sorted out the car rental? Loaded your playlists? It’s time to go on an extended road trip across the spectacular and diverse landscapes of Washington State.

From the winding, forested roads of the coast to the well-built engineering marvels of the Cascade Mountains to the dry, ruler-straight thoroughfares of the eastern plateaus, here are eight ways to escape the snarling traffic jams of Seattle and hit the open road.

The newest US National Scenic Byway, this 440-mile loop around the Pacific Northwest’s towering Cascades crosses the range twice – via Hwy 2 and Stevens Pass (home of a ski area), or Hwy 20 and the seasonally accessible Rainy Pass.

While the passes and mountains provide potent natural highlights, culture is laid on in a couple of cleverly themed towns. Leavenworth, blessed with a pretty alpine backdrop, is a former lumber town that was given a Bavarian makeover in the 1960s, after the transcontinental railway that threatened to put it out of business was rerouted. Stop at München Haus for authentic beer and sausages.

Once a struggling mining community, Winthrop avoided ghost-town status in the 1970s, when it was restructured to look like a cowboy settlement out of the Wild West. The nearby Sun Mountain Lodge is one of the best accommodations in Washington, period.

The western part of the loop traverses the gentler terrain of the Lower Skagit River Valley, incorporating the flower-growing fields of La Conner and the historic farming communities of Whidbey Island.

If Washington’s North Cascades resemble Alaska, the vineyards of the southeast manage to do a good impersonation of Napa. The Yakima and Walla Walla valleys have emerged as major winemaking destinations in the last decade, and a drive through the region’s small towns and bucolic countryside will teach you plenty about the terroir and viticulture of the Pacific Northwest. The trip follows I-82 (with some turn-offs) as far as the Tri-Cities, and then US 12 to Walla Walla.

Seek effervescence in Yakima, the state’s top spot for bubbles – Treveri Cellars’ sparkling wines are sublime – then sober up in Toppenish, a quirky cowboy town decorated with intriguing murals.

The rolling Rattlesnake Hills grow thick with grapevines and apple orchards; they’re known for smooth Bordeaux reds poured at a dozen or so local wineries, including Bonair near Zillah.

Red Mountain is the smallest Washington AVA, with a stash of wineries sprawled over sun-drenched slopes flush with golden grass, sagebrush and, of course, vines. Terra Blanca offers reds and dessert wines in a Tuscan-style tasting room.

In Walla Walla, wine, scenery and food conspire in perfect alchemy. The historic downtown has a clutch of wine-loving restaurants, led by the fine-dining Marc.

Famously wet, richly green and refreshingly remote, the Olympic Peninsula looks like it might have been resurrected from a wild prehuman era. Most of the region is protected in a national park, and the vast roadless interior is studded with glaciated mountains.

Hwy 101 circumnavigates the park, pushing deeper inside it along several spur roads and kissing the coast in the west. Whichever direction you drive, be sure to divert to Hurricane Ridge, a lofty viewpoint with a small ski-station that’s often above the clouds, with several trails high enough to commune with mountain goats.

A perennially popular detour off Hwy 101 is the 19-mile paved road to the Hoh Rain Forest, the densest, wettest, greenest and most intensely surreal temperate rainforest on earth. In the far west, the road does a drive-by of Ruby Beach (reached via a short path), a large expanse of stormy coast embellished by battered sea stacks and a forest’s worth of rotting driftwood.

One of the park’s least-crowded quarters is the thickly wooded Quinault River Valley, home to a historic lakeside lodge where you can recline in summer on the waterside lawn and in winter by the roaring fireplace.

Chuckanut Dr (aka State Rte 11) is Northwest Washington’s balcony over the Salish Sea, a historic coastal backroad that runs for 21 miles, from historic Old Fairhaven in Bellingham down to the fertile farmland of Skagit County.

The snaking road parallels the craggy, forested coastline, offering tree-framed views of an island-speckled sea. Halfway along is 2500-acre Larabee State Park, which boasts myriad diversions such as hiking, mountain biking, beachcombing and camping. On your ambling journey, be sure to pull over at the spectacularly situated Oyster Bar for local seafood.

Dry canyons, swaying sagebrush and an arid landscape miraculously irrigated by the Columbia Basin Project (the largest land reclamation project in the US), Washington east of the Cascades is a completely different universe to the wet, forested coast. This route is a National Scenic Byway following SR 17, US 2 and SR 155.

Starting in the small city of Othello, the byway skirts the edge of the Columbia National Wildlife Refuge, a jagged jigsaw of canyons, lakes, scablands, and ancient lava flows before passing monolithic Dry Falls, a 3.5-mile-wide precipice formed 15,000 years ago during the Missoula floods when a massive waterfall tipped over the drop.

The Grand Coulee Dam, built between 1933 and 1942, is the centerpiece of the region’s irrigation system and still the largest hydroelectric project in the US. A visitor center details the history of the dam and surrounding area that includes the water-sports nexus of Lake Roosevelt.

The drive’s endpoint, Omak is legendary for its annual stampede that includes the notorious “Suicide Race,” a 210ft plunge down a steeply angled slope on horseback.

Part of Washington’s little-heralded Puget Sound AVA, San Juan Vineyards produces cool-weather wines like Siegerrebe and Madeleine Angevine, while nearby Roche Harbor is anchored by a lovely marina packed with deluxe yachts and backed by a whimsical sculpture park.

English Camp is one half of a historical park that commemorates an 1859 border dispute between the British and Americans. The two powers narrowly avoided going to war over a dead pig.

Before visiting the park’s American half, stop by Lime Kiln Point overlooking the deep Haro Strait, one of the best places in the world to view orca whales from the shoreline. Conclude your Pig War tour at American Camp on the southern flank of the island, also home to a new visitors’ center cataloging the island’s indigenous history.

This steep but spectacular drive across the southern skirts of the US’ fifth-highest mountain rollercoasters between thick forest and high alpine meadows. Enter the park via the Nisqually entrance, which pitches you directly into old-growth rainforest with moss-covered behemoths dating back more than 700 years and measuring up to 200ft in height.

Since 1917, a National Park Inn has stood at the wooded way-station of Longmire, built in classic “parkitecture” style. It is complemented by a small store, tiny museum and a number of important trailheads, one of them partly accessible by wheelchair.

One of the park’s premier viewpoints, Ricksecker Point is beloved by photographers, and an ideal spot to study five of Rainier’s 25 glaciers. Nearby, a steep trail leads down through flowers and ferns to the misty 168ft Narada Falls, often embellished by ethereal rainbows.

The road’s high point is 5400ft Paradise, site of another historic inn. It’s famed for flower meadows backed by dramatic Rainier views and best enjoyed on the 5-mile Skyline Trail.

You’ll do a double-take at seeing two visions of Rainier on the mirror-like surface of Reflection Lakes. From there, the road plunges downward through U-shaped Stevens Canyon to Ohanapecosh, where the 1.5-mile Grove of the Patriarchs Trail explores a small island in the Ohanapecosh River, replete with ancient trees up to 1000 years old.

This trip tracks SR 14, aka the Lewis and Clark Hwy, for 100 miles along the north bank of the mighty Columbia River. It marks the climax of American explorers Lewis and Clark’s transcontinental journey in 1805, as they homed in on the Pacific and a place in American history.

Start in Vancouver, remembering that this understated Washington city is several decades older than its more famous Canadian cousin. A visit to its early-19th-century fort will explain the history.

To the east, distinctive 848ft-tall Beacon Rock is a former lava plug. It was bought for $1 by businessman Henry Biddle in 1915 who proceeded to build a snaking 1-mile trail to the top. You can still climb it. Just east of North Bonneville, you can also climb Dog Mountain. A tough 5-mile trail deposits hikers in vibrant subalpine meadows that showcase some of the state’s finest floral displays.

Columbia Hills Historical State Park is one of the best places to see tangible traces of the region’s Native American heritage, courtesy of the petroglyphs saved when the river valley was flooded in the 1950s.

Conceived by the maverick entrepreneur and road builder Sam Hill, the grandiose Maryhill Museum of Art occupies a mansion atop a bluff overlooking the Columbia River. Hill’s life-size, unruined replica of Stonehenge lies 2 miles to the east.