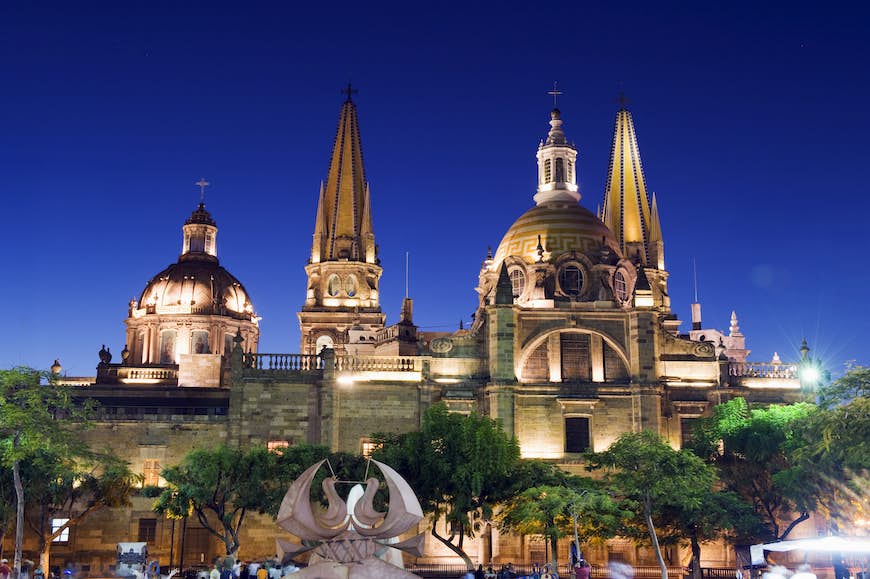 Its popularity has grown exponentially through the years – the high rises and traffic jams are easy indicators – though prices throughout the city remain mostly accessible. Nevertheless, when you’re on a budget, every peso counts. Here are the top 10 free things to do in this quintessential Mexican city.

Sure, walking tours can be touristy, but as you stroll across sweeping plazas, listen to the backstories of centuries-old buildings and admire the public art, you’ll gain a special appreciation for Guadalajara, past and present — and you’ll get your bearings, too. The city offers free 90-minute tours of the historic center every day, with bilingual guides leading the way to over a dozen landmarks. Tours leave at 10:30am from the Palacio Municipal; arrive at least 15 minutes early to secure a spot, and don’t forget to take a selfie at the iconic Guadalajara sign in the Plaza de la Liberación.

Make the most out of every adventure with help from our weekly newsletter delivered to your inbox.

Attend a concert in the Plaza de Armas

From blocks away, you hear the music in the plaza right in front of the Catedral de Guadalajara and the Palacio de Gobierno. The sounds of trumpets, violins, guitarists and singers coax you from Guadalajara’s busy streets to Plaza de Armas, one of the historic center’s many plazas. Most weeknights, the 19th-century bandstand fills with professional musicians playing traditional tunes. The benches are crowded with locals while folding chairs in neat rows invite passersby to sit and stay awhile. Grab a chair and join the crowd; shows start between 6:30 and 8pm.

Lie under a masterpiece in Hospicio Cabañas

Lying on a bench looking upward, you can take in José Clemente Orozco’s magnificent murals: nearly 60 modernist works completely covering the ceiling and walls of the chapel in the Instituto Cultural de Cabañas, a Unesco World Heritage site located on the Plaza Tapatía. Together, the murals present a history of the Conquest in the region – dark, ominous images of fire, armor, broken chains and crosses, the still air and whispering visitors only adding to their power.

Admission to view this grand dome is free on Tuesdays. Be sure to leave time to wander through the rest of the complex; its courtyards and hidden rooms reveal hundreds of works by contemporary Mexican artists.

Listen to mariachis in Tlaquepaque

Stepping into the El Parián, you’ll encounter a sea of equipales (traditional leather-top tables) busy with diners. Mariachi music fills the air as smartly dressed musicians travel from table to table, singing for tips. This is the go-to spot to listen to live mariachi groups — a former market-turned complex of restaurants and cantinas that open onto a leafy courtyard.

There’s no cover to enter, so it’s easy enough to wander in and listen to the music, but for the price of a cold beer or fresh lemonade, you can sit awhile and take it all in. Most days, at 3:30pm and 9:30pm, mariachi groups serenade the crowd from the bandstand, often followed by folkloric dance performances.

Set in a 19th-century catholic hospital, the Museo Pantaleón Panduro is one of Guadalajara’s must-see museums, showcasing prize-winning works of ceramic folk art from around Mexico. Step through stone archways into white-washed galleries filled with intricate miniatures and oversized urns, figurines and dishware – it’s a wonder to see the mastery and skill needed to create each piece. Admission is free year-round, though tours are available for tips and include access to tunnels once used by nuns.

Cycle through the streets

Join thousands of tapatíos every Sunday on the Via RecreActiva, a cycling route that opens up when over 30km of streets are closed to traffic from 8am to 2pm. Crowds of people take over the streets on bikes and on foot. Lace up your sneakers to stroll through town, stopping to watch street performers and to buy antojitos (traditional snacks) on the typically traffic-jammed avenues. You can also borrow a bike at Parque Revolución – they’re free with an ID – and pedal your way past some of the city’s most impressive landmarks until the event ends.

Wander through the largest indoor market in the Americas

For a slice of tapatío life, spend a morning wandering through Mercado San Juan de Dios, a three-story labyrinth of a market that’s bursting with local sights and sounds: people on daily shopping runs, haggling over piles of fruit and baskets of fragrant spices; pig heads on butcher’s counters with cheese and honey stands nearby; homeopath remedies and religious candle stands; all manner of handicrafts and home goods. Street food eateries take up the second floor of the market, so head there for a cheap bite among locals. As the largest Latin American market, there are countless vendors to explore here.

Take in the street art of Colonia Americana

Though Guadalajara is peppered with street art, the boho-hip neighborhood of Colonia Americana is where it’s at. Flashes of color pop from every direction – turquoise serpents on multi-storied buildings, garden scenes on corrugated metal doors and psychedelic coral reefs on mom-and-pop shops. Seemingly every overlooked corner and forgotten wall is draped in art. With dozens of works (and counting), you’ll find plenty of murals just by wandering around. For more guidance, check out the Guadalajara page of www.streetartcities.com, a free catalog of street art around the world.

Watch the light and sound show at the Basílica de Zapopan

On Friday and Saturday evenings, head to the revered Basílica de Zapopan. Its plaza comes alive with food stands, vendors, friends catching up and children running about. At 9pm, the plaza darkens, a hush falls over the crowd and the spectacle begins: a 3D light and sound show projected onto the church’s façade, telling the history of Zapopan (a colonial town-turned suburb) and the basilica itself. Come early for a spot near the front, and keep an eye out for fireworks!

For a break from Guadalajara’s urbanity, breathe in the fresh air at Bosque Los Colomos, a bucolic park on the northwest side of town. Take one of the well-maintained paths through the forest, where towering trees provide shade and cool the air, and water features and benches dot the way. Don’t miss the Japanese Garden with its intricate landscaping and koi pond that makes a lovely picnic spot. For the best birdwatching – including flocks of parrots – explore the southeastern area of the park near the ‘Chaco’ entrance.