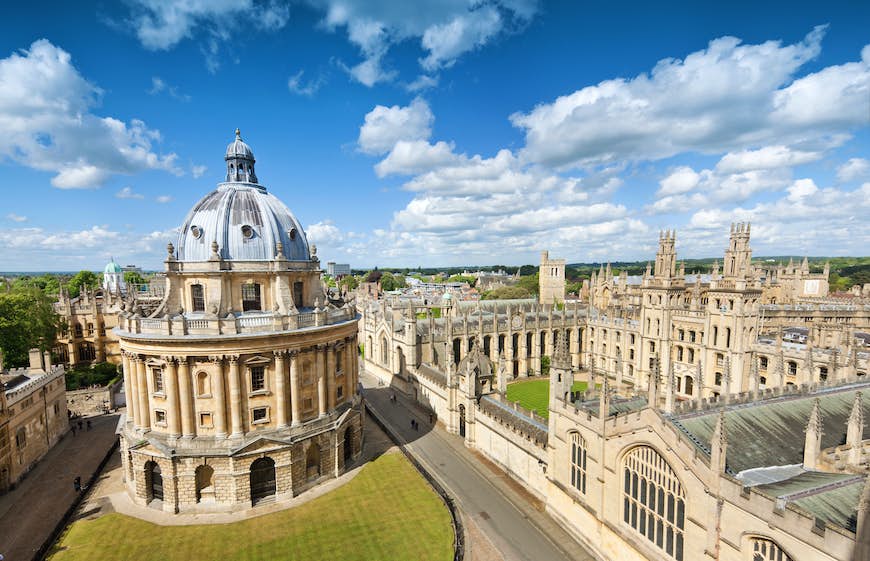 Hiring a car and driving through gorgeous English landscapes, visiting quaint villages and epic castles is a highlight of a trip to England no matter what the season. Roads are well maintained, although you may be caught out by the occasional pothole. Off the main roads you can meander down narrow lanes of hedgerows and stop to watch the sun set or a bird of prey gliding in the sky above.

Here are nine of the best road trip routes across the country, from a loop around Cornwall in the southwest, all the way north to a coastal jaunt right to the border with Scotland. The distances provided are not direct between the start and end points. Instead we assume plenty of diversions from the main route so you can explore more of each region.

Traversing the island’s narrow neck, you’ll encounter the extraordinary feat of engineering of Hadrian’s Wall first-hand. Every Roman mile (0.95 miles) had a gateway guarded by a small fort (milecastle), with two observation turrets between them, and many of these remain. A series of southern forts (which may predate the wall) were developed as bases, and 16 lie astride it. Preserved remains and intriguing museums punctuate the route, along with easily accessible remnants of the 1900-year-old wall. Start in the Newcastle suburb of Wallsend at Segedunum, marking the last strong post of the wall. Follow the route west, stopping to explore sites on the way. Be sure to include the superbly-preserved Roman cavalry fort at Chesters Roman Fort and Museum, and enjoy the views over the wall and the moors of Northumberland National Park at Housesteads Roman Fort and Museum.

Local tip: The interactive Housesteads Roman Fort & Museum showcases objects once belonging to Roman soldiers and the includes a mini-cinema that takes visitors on a journey to the past.

England’s rich heritage runs like a glittering seam through this remarkable multi-day road trip across the south. Romantic Leeds Castle alone is worthy of a full day, before stopping at the historic city of Canterbury with its World Heritage-listed Gothic cathedral. The quaint medieval settlement of Rye is a delight, with cobbled alleyways and stories of smugglers. Brighton, a lively coastal city with superb nightlife, is next on the route, followed by Portsmouth, where you can learn all about the city’s nautical heritage at the historic docks. Cathedral lovers will be further overjoyed by stops in Winchester and Salisbury to marvel at their majestic medieval spires, before traveling onwards to the fascinating archaeological sites at Stonehenge and Avebury. Drive on to soak up the Georgian cityscape in Bath, Churchill’s palace and Oxford‘s spires.

Buckle up, roll down the windows and have the camera ready – there can be few corners of Britain where scenery packs such an eyes-wide, heart-in-the-mouth, jaw-on-the-floor punch as Cornwall. This unforgettable adventure travels top-to-bottom, coast-to-coast, starting from the breezy seaside town of Bude and following the coastline all the way down, round and back up again to Fowey. Along the way you’ll encounter sparkling beaches, surf bays and seaside ports galore, as well as curiosities such as a clifftop castle steeped in Arthurian legend, a theater built into the granite rocks, the wonderful St Michael’s Mount, and a trio of space-age biomes at the Eden Project. It’s wild and wonderful out west, as you’re about to find out.

Poole – Lyme Regis; 90 miles (145km); 7 daysOne of the west’s best drives, this route rolls up chalk ridges, through thatched villages and along sea-fringed roads. History is everywhere: from fairy-tale castles to an art-packed quarry. Prepare for the pick of Dorset’s sights and sea-view sunsets as you keep heading west. Fall in love with the romantic hilltop ruins of Corfe Castle, and take a dip in Lulworth Cove before hiking over to the stunning Durdle Door arch. Little ones are likely to love a visit to the Monkey World sanctuary in Wareham, the 18-mile stretch of pebbles at Chesil Beach, and may well be fascinated by the fossils that can be found in Lyme Regis.

From the less-traveled, superbly-pretty villages of the southwestern Cotswolds to the impossibly beautiful gold-colored streets of the classic northern Cotswolds, this trip threads through the core of one of England’s most desirable regions. Glimpse Georgian grandeur in Bath, marvel at Painswick’s sleepy beauty, and unearth Roman history in Cirencester. You’ll want to stop in picturesque Bibury to admire the gorgeous cluster of riverside cottages, before strolling Chipping Campden’s honey-hued lanes and wrapping up in dramatic Tudor style at Stratford-upon-Avon, home of the illustrious Bard, William Shakespeare.

Detour: The picture-postcard villages of Upper and Lower Slaughter, roughly a mile apart (3.5 miles southwest of Stow-on-the-Wold) have managed to maintain their unhurried medieval charm. Their names have nothing to do with abattoirs; they come from the Old English ‘sloughtre’, meaning slough or muddy place.

William Wordsworth, Samuel Taylor Coleridge and Beatrix Potter are just a few of the literary luminaries who have fallen in love with the Lake District. It’s been a national park since 1951, and is studded by England’s highest hills (fells), including the highest of all, Scafell Pike. This drive takes in lakes, forest, hills and valleys, with country houses, hill walks and cozy pubs thrown in for good measure. Highlights include visiting Wordsworth’s former homes in Grasmere, walking through the classic Lakeland valleys of Borrowdale and Buttermere, admiring the wild landscapes and England’s highest mountain in Wasdale, and driving Hardknott Pass the district’s steepest road pass (at a 30% gradient in some places, with precious few passing places on the narrow, single-file road, this is absolutely not for the faint-hearted or nervous drivers).

Planning tip: Motorways and main A-roads deliver you quickly from one end of the country to another. Lesser A-roads, B-roads and minor roads are much more scenic – ideal for car or motorcycle touring. If you or your children get travel sick, you’ve been warned: these roads are twisty.

This grand tour begins with famed Nottingham Castle and ends with similarly famed Lincoln Castle, stopping at the mighty fortress of Warwick Castle en route. In between, you’ll see Bosworth Battlefield where Richard III became the last English king to die in battle, and learn the extraordinary story of the 2012 discovery of his long-lost remains in a city car park. You’ll also stop at wonderful stately homes, such as lavish Burghley House, the Tudor mansion at Sulgrave Manor, and Althorp House, the final resting place of Princess Diana. In each, take time to wander the opulent corridors, the magnificently-landscaped gardens and the wider estates, some with free-roaming deer.

This varied tour takes in ancient architecture, wild moorland scenery, picture-postcard villages (complete with steam trains!) and a classic seaside resort…with macabre literary connections. The Blakey Ridge road out of Hutton-le-Hole just keeps climbing and climbing, leaving behind the medieval city of York and the aristocratic splendor of Castle Howard to enter a world of windswept heather moorland, wandering sheep, lonely stone crosses and ancient footpaths. Stop in Malton, a Yorkshire food haven, and then the bustling fishing harbor of Whitby, with its Gothic abbey and links to Bram Stoker’s Dracula. End your road trip in Robin Hood’s Bay, one of the prettiest spots on the Yorkshire coast.

Detour: Get transported back to 9th-century “Jorvik” (the Viking name for York) at the multimedia Jorvik Viking Centre. History is brought to life with a smells-and-all reconstruction of the Viking settlement unearthed here during excavations in the late 1970s.

This drive along northeast England’s stirring coastline from Newcastle-upon-Tyne to Berwick-upon-Tweed on the Scottish border runs through the historic medieval kingdom of Northumbria, passing long, desolate beaches, wind-battered castles and magical islands. Newcastle is renowned for its culture and nightlife. Stop by the iconic Angel of the North sculpture a few miles south of the city, before taking the road north to nearby Tynemouth, where you’ll find one of the best surf spots in England at a Blue Flag beach overlooked by the ruins of a Benedictine priory. Once you hit the open road the pace drops down several gears – wild and remote, this area is sparsely populated. Along the way you’ll encounter incredible birdlife in Amble where you can visit a puffin colony, and fresh-as-it-gets seafood hauled in at traditional fishing ports. Alnwick is a lovely historic town with an impressive castle that starred as Hogwarts in the Harry Potter movies, and Bamburgh has the region’s most dramatic clifftop castle. Further north, the road takes you by Holy Island, or Lindisfarne, a tiny other-worldly spot linked to the mainland by a narrow causeway at low tide.