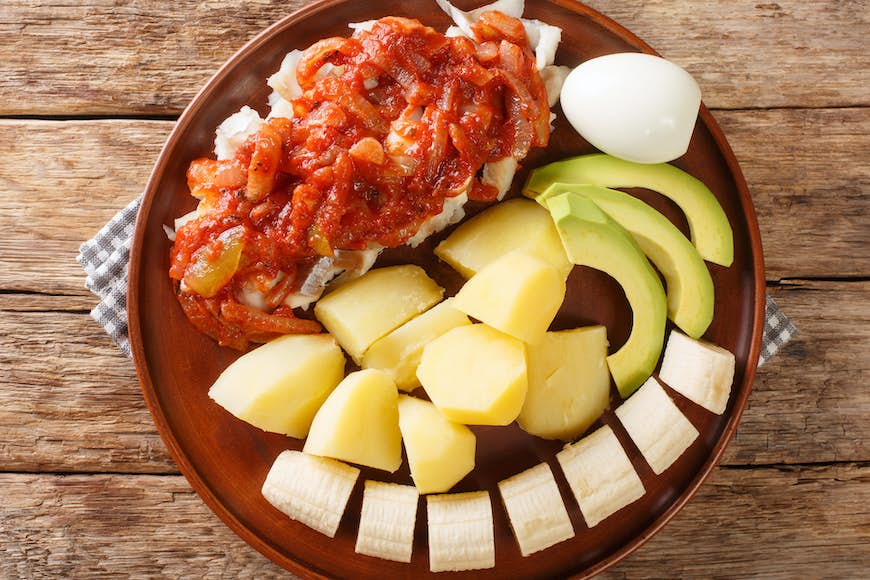 Bermuda’s eclectic cuisine is a reflection of its history, from the accidental arrival on an uninhabited island by English survivors from the Sea Venture shipwreck, through centuries of the transatlantic trade of enslaved people, to the arrival of Portuguese farmers from the Azores.

British, African, Portuguese and West Indian culinary influences, ingredients and traditional techniques have all shaped the country’s classic dishes, while Bermuda’s location in the middle of the Atlantic has ensured an abundance of fresh fish and shellfish.

While you’re not terribly likely to find ye olde staples on which Bermudians subsisted over the centuries, such as shark hash, the contemporary dining scene runs the gamut from fusion eateries and simple grilled fish joints to British-style pubs and restaurants showcasing Italian, Jamaican, Chinese and other global flavors. The island is also known for its Gosling’s Black Seal rum, used in Bermuda’s signature cocktail. Here are the local specialties you can’t miss.

Typically enjoyed on a Sunday morning these days, codfish and potatoes is a dish that evolved from a popular 18th-century staple. Back then, ample amounts of bacalao (salted cod) were imported from Portugal as an inexpensive way of feeding the population of enslaved people, since bacalao keeps forever. Today’s breakfast platter comes with boiled potato, avocado, and boiled egg, with the whole lot smothered in tomato sauce or onion sauce. Bermuda fish cake is a fun spin on the dish, with bacalao, peas, rice, crispy bacon, onion and thyme mashed into a patty (and served with hot cross buns during Easter).

Where to try it: Bouchée, Island Cuisine, White Horse.

Munch on a fish sandwich

Found on most menus, Bermuda’s iconic sandwich consists of vast fillets of battered, deep-fried fish, squeezed between a couple of slices of raisin bread or wholemeal bread and topped with homemade tartar sauce. Depending on where you get it from, you may have the option of ordering “the works”: coleslaw, hot sauce, grilled Bermuda onions, lettuce, tomato and cheese. It is not a dish that can be eaten in a dainty fashion.

Chow down on fish chowder

Comparable to Louisiana’s gumbo, Bermuda’s hearty fish chowder is the island’s national dish. Composition varies from household to household, but you’ll likely find large chunks of fish, tomatoes, potatoes, carrots and green peppers, with Gosling’s Black Seal rum and Outerbridge’s Sherry Pepper Sauce adding extra flavor and fire. The chowder is allegedly as old as Bermuda, with the survivors of the Sea Venture shipwreck making soup out of anything they could rustle up.

Other soups with a proud history to look out for are Bermudian onion soup, similarly spiced up with Outerbridge’s Sherry Pepper Sauce and Portuguese red bean soup.

Mop it up with Johnnybread

Bahamians would recognize this simple Bermudan dish since they also make a version of Johnnycake or Johnnybread (pan-cooked cornmeal bread). Fishers out at sea for days would live on the stuff, cooking it inside the boat in a box filled with sand, and it’s still served as a side dish in eateries across the island.

Where to try it: Almost every restaurant in Bermuda serves this classic.

The best of Caribbean islands

The Atlantic waters around Bermuda are particularly rich in numerous species of shore and ocean fish, that include yellowfin tuna, mahi, wahoo, snapper. Rockfish (black grouper) is arguably the most popular and you’ll find it in any seafood restaurant worth its salt in various forms. Have it Bermuda-style: pan-fried in a lemon butter sauce, served with toasted almonds and grilled bananas (though steamed, baked or grilled is also tasty).

Add a helping of Hoppin’ John

A regular accompaniment to Bermudian mains and a delicious savory dish in its own right, Hoppin’ John (aka Hop ‘n’ John or Peas ‘n’ Rice) is a mix of black-eyed peas cooked with bacon, Portuguese sausage, brown rice, Bermuda onion, garlic and thyme. If you like Hoppin’ John, look out also for Peas ‘n’ Plenty – another black-eyed pea dish involving salt pork, rice, Bermuda onions, and the occasional addition of boiled sweet potatoes.

Where to try it: Mad Hatters (though most restaurants have their own version).

Treat yourself to spiny lobster

Bisque, thermidor, baked, curried, in ravioli, with pasta… there are many ways to enjoy Bermuda’s clawed delicacy. Similar to Maine lobster, Caribbean spiny lobsters are found on menus across the island during the September to March season (the rest of the year, you’ll be munching on its cousins from America’s East Coast.

Where to try it: Wahoo’s Bistro & Patio, Lost In The Triangle, Bermuda Bistro At The Beach, Fourways Inn.

Keep it old-school with mussel pie

One of the staples of early Bermuda settlers that makes ample use of local shellfish is the mussel pie – savory pastry filled with mussels cooked in fish broth with potatoes, carrots, onion, thyme and salt. Another variation of it is the curried mussel pie.

Speaking of old-school pies, you may also chance upon pastry filled with Bermuda onions – sweet onions that can be eaten raw like an apple that locals are hugely proud of.

Where to try it: The Pie Factory.

Dress up for afternoon tea

Nibbling on dainty cucumber or smoked salmon and cream sandwiches with the crusts cut off and noshing on a selection of sweet petit fours while sipping a cup of tea is a classic British activity. Which makes it a classic Bermudian pastime as well, practiced by many hotels, guest houses and restaurants between 3pm and 5pm, particularly on weekends. Dress nicely; the locals do.

We don’t know who was the first of South America’s indigenous people to discover that you can make cassava fit for human consumption if you first squeezed all the poisonous juices from the starchy tuber, but you have them to thank for this wonderfully stodgy dessert. The cultivation of cassava dates back to Bermuda’s first settlers, and sweet cassava pie is a Christmas staple as vital to the festivities as the roast turkey. (Another stodgy holiday dessert is sweet potato pudding, served as an accompaniment to Bonfire Night/Guy Fawkes Day on November 5). Finally, if you’re looking for a sweet, moist, buttery treat available year-round, seek out Bermuda black rum fruitcake.

Wash it down with a Dark ‘n’ Stormy

Rum has been the drink of choice for Bermudian sailors, privateers and merchants alike for hundreds of years, ever since Gosling’s dark and sultry Black Seal rum was first distilled on the island in 1806. Liberal lashings of said rum are essential for mixing the country’s national drink – the Dark ‘n’ Stormy cocktail, which also includes spicy ginger beer, and which takes its name from the dark and stormy night that left the original colonists stranded on the island after the Sea Venture was wrecked upon the reef.

Where to try it: Gosling’s Rum Distillery, The Hog Penny.

Sip on a Swizzle

Bermuda’s other national drink and the biggest competitor of the Dark ‘n’ Stormy is the Swizzle. The potent tipple involves a melange of Gosling’s Black Seal Rum, Gosling’s Gold Seal Rum, Falernum (a local sweetener), orange juice, pineapple juice and Angostura bitters, and most Bermudians have their own recipe that they swear by. In fact, after a few Swizzles, some can’t stop swearing. You can try the original at Swizzle Inn in Bailey’s Bay, and you can even try to get your name on their Wall of Champions by quaffing as many Swizzles as you can in one sitting (the record currently stands at 30, apparently).

Where to try it: Swizzle Inn.

Keep it sweet with loquat jam and or loquat liqueur

Originally imported from the cool, hilly regions of China and looking a bit like tiny plums, loquats are small, wild yellow fruits that locals forage for from late January until March in order to turn them into jam. Some go a step further and combine the berries with rock sugar and Gosling’s Light Rum in order to ferment them into an amber-colored, aromatic liqueur that was originally popularized as a sippable afternoon tea drink in the 1840s; the professionally-produced version is known as Bermuda Gold and is used in fruit sours cocktails on the island.

Where to try them: jam: gift shops in Hamilton and The Dockyard; loquat liqueur: Gosling’s Rum Distillery.

Don’t deny the vegetarians and vegans

There are plenty of cafes and restaurants in Bermuda that either offer vegetarian and vegan dishes alongside their other fare, or else cater exclusively to a dairy-free or plant-based lifestyle clientele.