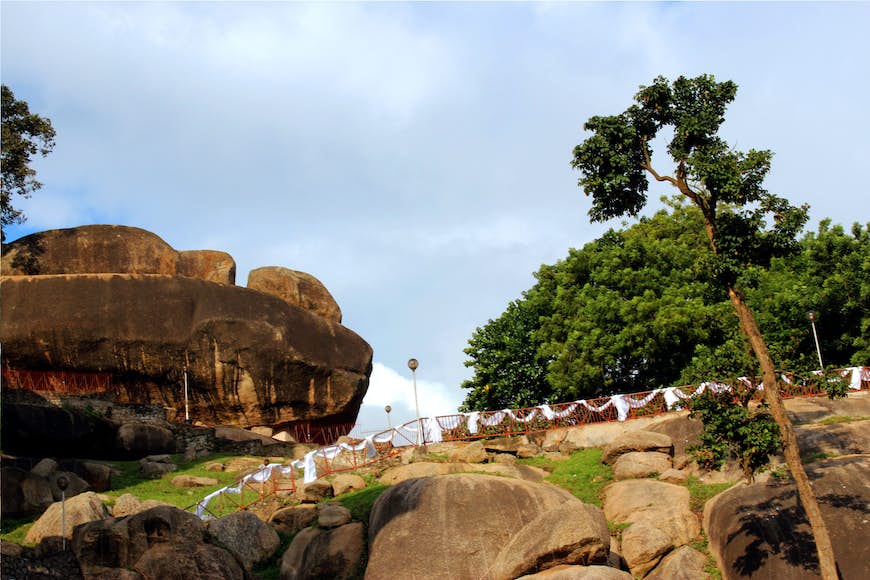 Lagos is top of the mind for most people visiting Nigeria. It’s the country’s long-standing commercial and entertainment capital full of thrills and treats. But then, the city can sometimes be too much to handle.

At times like these, Lagosians travel the relatively short distance to nearby cities like Abeokuta and Ibadan, both of which offer a heartwarming combination of scenic views, historical and cultural gems.  If you have a free day, or two, on your itinerary, consider filling them up with any of these day-trip options.

Abeokuta is famous for its rocky terrain. Begin your sightseeing at Olumo Rock, its most visited attraction. Hike to the top (137m) to get a birds-eye view of the ancient town and some of its top landmarks. The tour begins with a briefing at the Lisabi Garden, named after one of the town’s earliest warrior-leaders; here, you can buy bottled water or palm wine to take with you on the climb.

On your way up, guides narrate the story of how this place served as a shelter for thousands fleeing the multiple wars in Yorubaland in the 19th century, including bloody and repeated battles with the warriors of Dahomey. You get to step  back in time by entering one of the caves preserved from that period. There are at least two shrines – usually with priests seated in front of them – on the way, both tied to the early history of the town.

Abeokuta is also well known for its colorful adire (indigo-dyed) cloth, a heirloom that has been passed down for many generations and over the centuries. Families can still be seen producing reams and reams of it in various compounds (there are no official tours of these compounds, but you can arrange with a local guide to take you to one). Shop for these fabrics at the purpose-built Adire Mall, a short drive from Olumo Rock.

On your way out of Abeokuta, drop in at the striking Olusegun Obasanjo Presidential Library (OOPL), a multiplex on 37ha of land. The name is somewhat misleading – it’s more than a library and there’s enough to keep you here for a day, so it’s a good thing to decide what to see and do, and what to leave out.

Among the facilities, there’s a cultural village, sports and recreation center, cinema, a wildlife park, an African fabrics center and theme park for kids. The main draw is its museum (tours cost N3000 per visitor), which documents Nigeria’s political and economic history, through the involvement of its two-time post-independent leader, Chief Olusegun Obasanjo. Allow two hours for a tour of both wings in the museum. When you’re done, walk over to the Bamboo Grove, where you can relax over gourds of palm wine and plates of suya (barbecue meat).

How to get to Abeokuta

Abeokuta is a little over an hour (100km) north of Lagos by road, on the Lagos-Ibadan Highway. You can get a shared taxi from the Ojota Motor Park or hire a car from your hotel to take you. Alternatively, you could go by train from the Mobolaji Johnson Station at Ebute Meta, or the Babatunde Raji Fashola Station at Agege.

Why go? To better understand local politics, and how Nollywood began

A different kind of experience awaits you at Ikenne, the country home of one of Nigeria’s founding fathers – Chief Obafemi Awolowo – sometimes described as the “best president Nigeria never had”.

In addition to his mausoleum, the compound holds a museum dedicated to his life as a politician, author, lawyer and intellectual. Exhibits include original copies of his books, academic robes as well as various staff of office as a multiple chief of different communities around Nigeria. You can view entries in his journal about his many political struggles and thoughts about national issues.

A further 15 minute drive away from Ikenne, at Ososa, explore the filmic paradise that is the Hubert Ogunde Living History Museum. Ogunde, who died in 1990, was one of Nigeria’s most versatile thespians, who rose to become one of its most influential filmmakers. Older Nigerians recall trooping to the national theater in Lagos in the 1970s and 80s to watch his box-office hits.

The museum – where Ogunde lived the last 10 years of his life – highlights his many accomplishments in music, stage and film and a career that spanned five decades. In both his stage and film productions, he celebrated the diversity of Nigeria through dance, cultural objects and costume (an entire room is dedicated to a large collection of these).

How to get to Ikenne & Ososa

Ikenne (75kms, one hour) and Ososa (another 25 kms, 20 mins) are on the Benin-Sagamu Highway, the gateway to Nigeria’s Eastern region. The best way to reach them is to hire a car for the day.

If you’re visiting Lagos in the dry season (October to March), then there could be no better time to go on an adventure to the Omo Forest (675 ha). A Unesco-designated biosphere reserve, it hosts the highest diversity of butterflies on the continent. It is also the nearest location to Lagos where you’re likely to spot elephants in the wild. The goal of almost all visits is reaching the Elephant Camp, which can take three hours of hiking through rich lowland rainforest. Other wildlife here include civet cats, white-throated monkeys, chimpanzees and pangolins.

If you’d rather not return to Lagos the same day, lodge at the leafy and serene surroundings of the Babcock University Guest House in Ilishan – a five-minute drive across the highway from Ikene.

How to get to Ikenne & Ososa

Beyond Ikenne and Ososa, 80km from Ilishan is Omo Forest Reserve. If you want to do all three in a day trip, it’s best to tackle the Omo adventure very early in the morning, stopping over at Ikenne and Ososa on the way back to Lagos.

Why go: to understand the worldview of the Yorubas

Ibadan, founded by migrants fleeing war in the early-19th century, is a commercial and deeply cultural society. It’s the one city in Yorubaland where you’re most likely to run into an Egungun (masquerade) festival or procession. Its royal succession model, instituted in the 1850s, is also unique amongst the Yorubas; to be the Olubadan, candidate-chiefs will have had to rise through 23 intermediate positions.

If you’re interested in learning more about kingship in traditional Yoruba society, understand its age-long belief system and the causes of its many inter-tribal wars, then visit the Odu’a Museum and Hall of Fame, up at 14th floor of the Cocoa House, the 26-storey skyscraper built in the 1960s.

Stop for a meal at the Kokodome, just beside Cocoa House, before exploring other landmarks around town. Mapo Hall (b.1929), an important relic of the colonial years, has hosted many socio-political gatherings. It is also where the coronation of a new Olubadan takes place. From here, stroll across the road to Oja Oba (King’s Market) to get a feel for the vibe and vibrancy of a typical market in Yorubaland.

Bower’s tower, Agodi Gardens and Eleyele Lake are favorites of local travelers. The University of Ibadan, the first in Nigeria, has a bookshop worth visiting, and so is Booksellers. Wrap up your visit to Ibadan with a stopover at the National Museum of Unity, one of four in Nigeria. Its galleries showcase some of the most cultural elements shared by the different ethnicities that make up the country, from masquerade and textile culture to pottery heritage and traditional musical instruments.

How to get to Ibadan

Iwo Rd is Ibadan’s major motor park where minibuses arrive from Lagos (130kms, 90 minutes to two hours away). Trains run from Mobolaji Johnson Station. Alternatively you can organise your own transport.

Why go? For cultural immersion

If you have a weekend to spare, then by all means venture beyond further afield. An hour or so away from Ibadan is Oyo, the current location of the town that was once at the heart of the famed Old Oyo Empire. A band of drummers welcome you to the spacious grounds of the palace of the Alaafin, a masterpiece of traditional architecture. Oyo people are skilled calabash carvers, and they have practiced this craft for centuries; you can visit them right in their compounds or at the market, where finished pieces are on sale.

From here, head to Osogbo – 80km north of Ibadan – to explore the Osun Grove, a Unesco World Heritage site and the only one in southern Nigeria. If you’re visiting in late August, then plan to see the grand finale of the Osun-Osogbo festival, a celebration in honor of the goddess of River Osun and which pulls devotees from around the world.

Less well known to travelers, but also worth your while, are the centuries-old palaces, both within the grove as well as in the premises of the Ataoja of Osogbo, the traditional head.

In Ile-Ife, visit the white wonderland that is the palace of the Ooni, the highly regarded monarch and spiritual head of the Yorubas. You can arrange for palace guards to take you on a tour to some of the key spots within the palace. Right next door is the Ife National Museum; within the museum premises, you’ll find a master artist carving wood into fine figurines, all for sale.

If you have any interest in Yoruba traditional religion, then stop at shrines dedicated to  Ogun, Obatala, Oduduwa, Oranmiyan, Osun and Yemoja, among a host of others.  The World Ifa Temple, usually deserted and quiet, comes alive in August when it hosts the World Ifa Congress. In September, Ife hosts  its most important traditional gathering, the Olojo Festival. Wrap up your weekend with a night at the palatial Ife Grand Resorts.

How to get to Osogbo

The best way to reach Osogbo and Ile-Ife is through Ibadan. Take the train to Ibadan and get a private car for the rest of the journey. Osogbo is off the Ibadan-Ife highway, at the Gbongan junction.