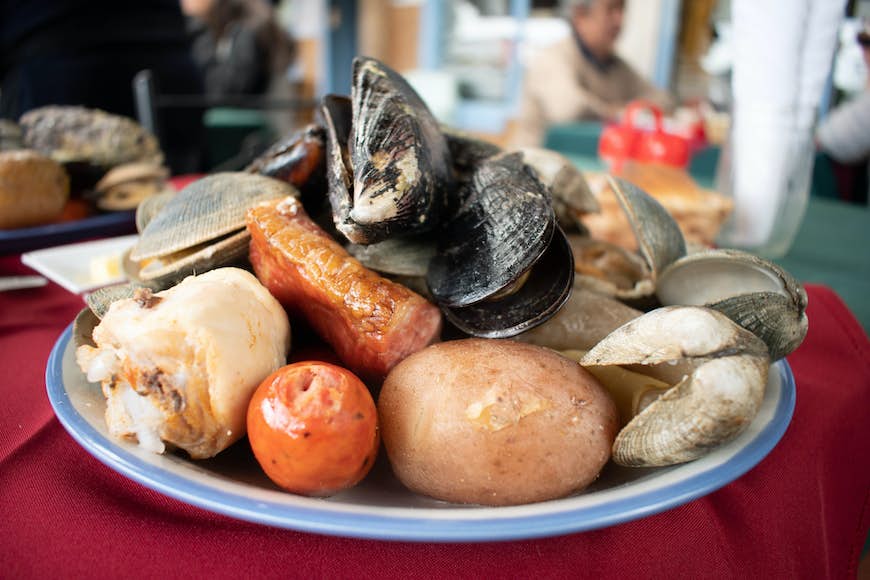 Ancient Andean recipes and the seafood bounty of the Pacific Ocean are essential elements of the cuisine in Chile. Traditional restaurants fire up iconic dishes that transform corn, potatoes and other staple ingredients into works of art, while vibrant markets dole out time-tested favorites and some of South America‘s best street food.

Given the wide-ranging climate and geography, food and drink in Chile vary considerably from region to region. You’ll find desert recipes, unique island cooking techniques and a growing number of restaurants catering to plant-based diners.

Here are the best things to eat and drink in Chile.

One of Chile’s most popular dishes is pastel de choclo, a hearty casserole that’s something of a South American shepherd’s pie. This comfort-fare classic features hard-boiled eggs, olives, and ground beef or chicken, along with all-important creamed corn dough (choclo) that binds it all together and gives the dish a warm sunny glow.

Where to try it: Nearly any respectable Chilean restaurant will serve up a memorable pastel de choclo, but it’s worth heading to elegant Donde El Guatón in La Serena for one of the country’s best.

Indulge in a curanto feast on the Chiloé Archipelago

Head to the mist-shrouded islands of Chiloé to experience Chile’s unique culinary traditions, including curanto. This extraordinary dish, which likely predates the arrival of the Spanish, is traditionally prepared in earth ovens. Stones, heated in a bonfire until red hot, are set in a hole in the ground.

The ingredients are then directly piled on. Shellfish, pork and chicken are added first, followed by chapaleles (a kind of potato dumpling), various vegetables, and the leaves of the nalca (a rhubarb-like plant). The whole mixture is covered and left to simmer for a couple of hours. Then the feasting begins!

Where to try it: Many places around the archipelago serve curanto, though one of the best is fired up at Restaurant Quetalmahue, located in a small fishing village (also called Quetalmahue) around 15km (9 miles) west of Ancud.

Bite into desert fruits in the Atacama

Famous for its shimmering salt lakes, sputtering geyser fields and otherworldly rock formations, the parched landscapes of the Atacama desert also contain some hidden culinary specialties. The indigenous Atacama people enjoy dishes like patasca, a stew made of pork or beef, potatoes, onions and a white corn unique to the region. You can also find desert produce like pepino dulce, a striated oval-shaped fruit that tastes like a cross between a melon, pear and cucumber.

Where to try it: In the adobe-walled town of San Pedro de Atacama, you can taste desert herbs, plants and cooking traditions at the restaurant Baltinache. When the heat soars in the afternoon, head to Heladeria Babalú, an ice cream shop featuring desert fruit flavors as well as Chilean hits like pisco sour.

Although you’ll find empanadas in other parts of Latin America, chilenos whip up some of the most heavenly versions you could bite into. The simple but widely loved street food is a breaded turnover (pasty) that’s stuffed with meat, cheese, seafood or veggies and then baked or fried.

The most traditional empanada is stuffed with pino, a combination of ground beef, onions, black olives, hard-boiled eggs and raisins. You’ll also find empanadas made with seafood, Italian-style combinations (with cheese and tomato) and many other varieties.

Where to try it: Specialty empanada shops are widespread in Chile, but you can also find them in markets and even sold by vendors on some city streets and plazas. If it’s variety you’re after, head to Delicias Express in Valparaíso, where you’ll find some 80 different types of empanadas. On the other side of town, Empanadas Las Famosas also has a loyal following, particularly for its weekend-only seafood empanadas.

Sip a pisco sour after visiting a historic distillery

The rolling hills of the sun-baked Elqui Valley are crisscrossed with vineyards, which make up the heart of Chile’s most important pisco-producing region. Chile’s national drink is pisco, a high-proof brandy made from muscat grapes. Unlike in Peru (which also claims the spirit as their own), Chilean winemakers sometimes age their piscos in wood — often French or American oak — which gives a more golden color and can impart flavors of vanilla, maple syrup or more floral notes.

Where to try it: In the charming town of Pisco Elqui, you can learn all about the production of Chile’s iconic drink at Destileria Pisco Mistral. Afterward, sip a refreshing pisco sour in the garden. Another great place to sample high-quality piscos straight from the source is Fundo los Nichos, an artisanal producer that’s been around since 1868.

Savor seafood delicacies all along the coast

No matter where you roam in Chile, you won’t be far from the ocean in this pencil-thin country with a coastline stretching more than 4200km (2610 miles). The bountiful Pacific in its backyard gives Chile some of its best-loved staples, which include loco (abalone), erizos (sea urchins), machas (razor clams), jaibas (crabs), ostiones (scallops) and congrio (conger eel), plus yellowfin tuna, corvina, merluza (hake) and numerous other fish.

Look out for seafood stews like paila marina, made of shellfish, tomatoes, herbs and spices.

Where to try it: Seafood lovers can hit vibrant mercados de mariscos (seafood markets) on or near the coast all the way from Arica in the north to Valdivia in the south. A great place to start is Santiago’s Mercado Central, which is famous for its seafood restaurants — Donde Blanca is one of the best.

Chile leans pretty heavily on meat and seafood when it comes to restaurant menus. With a bit of ingenuity, however, you can eat well while still following a plant-based diet. Chileans love their breads, which you can then top with pebre, a salsa made of olive oil, onions, coriander, garlic and aji peppers.

Humitas are steamed or boiled corn cakes that are served wrapped in corn husks (they’re usually made with vegetable oil, but some cooks use lard). Porotos granados is a traditional stew made of cranberry beans, corn, squash and sometimes pumpkin. You can also make a meal of empanadas, with many places offering vegan options.