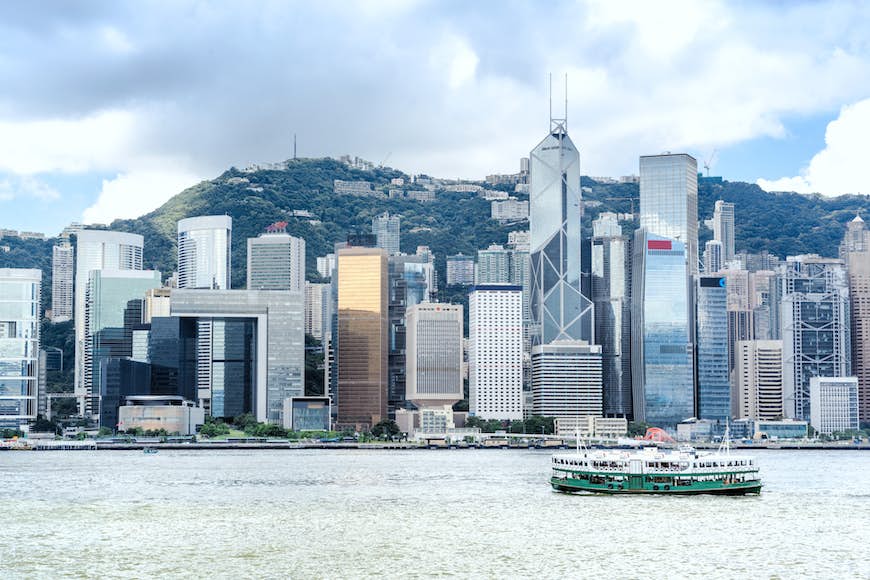 High-rise Hong Kong has long been a hive of busy worker bees who depend on the city’s efficient transport system to whisk them from apartment to office to mall to restaurant and back again.

Most people use the MTR, a swish subway and train network with more than 150 stations dispersed across Hong Kong Island, Kowloon, Lantau and the New Territories. But given the hilly island topography, there are many more creative ways to get from A to B, and for visitors it can be far more rewarding to slow down, stay above ground and savor the journey.

Yes, they’re slower than the MTR, but the iconic green and white Star Ferries embody slow travel at its finest. Hop aboard for jaw-dropping skyline views (day or night), a tangible sense of history, and the finest photo op of your trip. Best of all, it costs less than a cup of tea.

Note that there are two Star Ferry routes (you can also sail from Kowloon to Wan Chai) and two ticket types (upper and lower deck). Upper-deck tickets are slightly more expensive (up to HK$3.70 on weekends) but come with air-conditioning and better views.

Looking like slimmed-down London double-deckers, the “ding dings” trundle between the eastern and western districts of Hong Kong Island. They’re a cheap, leisurely and scenic way to go between Central and more laidback Kennedy Town, say, or to the shopping mecca of Causeway Bay in the other direction.

The flat fare is HK$2.60, using either the exact amount in coins or an Octopus card. Use the turnstiles at the back of the trams to get on, then pay at the front when you get off. Try to snag a front seat on the top deck for the best views.

Hong Kong’s most famous tram, the Peak Tram isn’t really a tram at all but a remarkably steep funicular railway. The route was upgraded in 2022, and the tram cars now carry twice the passengers – 210 in total – for the 396m (1299ft) vertical ascent to Victoria Peak and Hong Kong’s best view.

Connecting the office blocks of Central to more residential zones further up the island, the zig-zagging Central-Mid-Levels Escalator is a commuting lifeline for Hong Kong, shifting almost 80,000 people a day for the 800m (2624ft) trip (down to work in the morning, up from 10am until midnight).

With multiple points to hop on and off, it’s perfect if you’re heading to that hip new SoHo bar and don’t want to sweat your way up the exhaustingly steep and humid streets. It’s also handy for hitting up Tai Kwun, Hong Kong’s former Central Police Station turned heritage arts complex.

Flag down a taxi (but watch for the colors)

Taxis are cheaper than you might think for a city like Hong Kong, and the retro-styled Toyota cars are spacious and comfy (and who doesn’t love those self-opening doors?).

The taxis are color-coded, but for most urban trips you’ll be seeing red, which also happens to be the most expensive type, charging HK$27 for the first 2km (1.2 miles) and HK$1.90 for every 200m (656ft) and minute of wait time thereafter. Green taxis serve the New Territories, while the light blue taxis are for Lantau.

Make sure to get an Octopus card

Hong Kong’s rechargeable travel smartcard saves you a bit of money on trips, but most of all it saves time – no digging for exact change or queuing up at ticket machines.

The Octopus card costs HK$150, which includes a HK$50 refundable deposit and HK$100 worth of travel credit. You can use it on most forms of transport, including taxis and the Peak Tram; you can even use it to get into the Happy Valley racetrack. You can also download the Octopus app using either Samsung Pay or Apple Pay and travel with your smartphone or watch instead.

Octopus cards are available to buy from machines in MTR stations, as well as from convenience stores like 7-Eleven.

Take a ferry to the outlying islands

Ferries to the Outlying Islands depart from the Central Piers. They are reasonably priced, air-conditioned and some have a basic bar that serves snacks and cold drinks. Tickets can be bought on the day from kiosks at the entrance to each pier. Ferries to and from the outlying islands can get very crowded on Saturday afternoon and all day Sunday, especially in the warmer months.

Clean, fast, safe and transporting around four million people every day, Hong Kong’s MTR (Mass Transit Railway) runs from 6am to sometime between midnight and 1am.

Tickets are cheap compared with those in many other world cities: between HK$5 and HK$30, though fares to stations bordering mainland China (Lo Wu and Lok Ma Chau) cost up to HK$55. If possible, it’s best to avoid the rush hours: 7.30am to 9.30am and 5pm to 7pm weekdays.