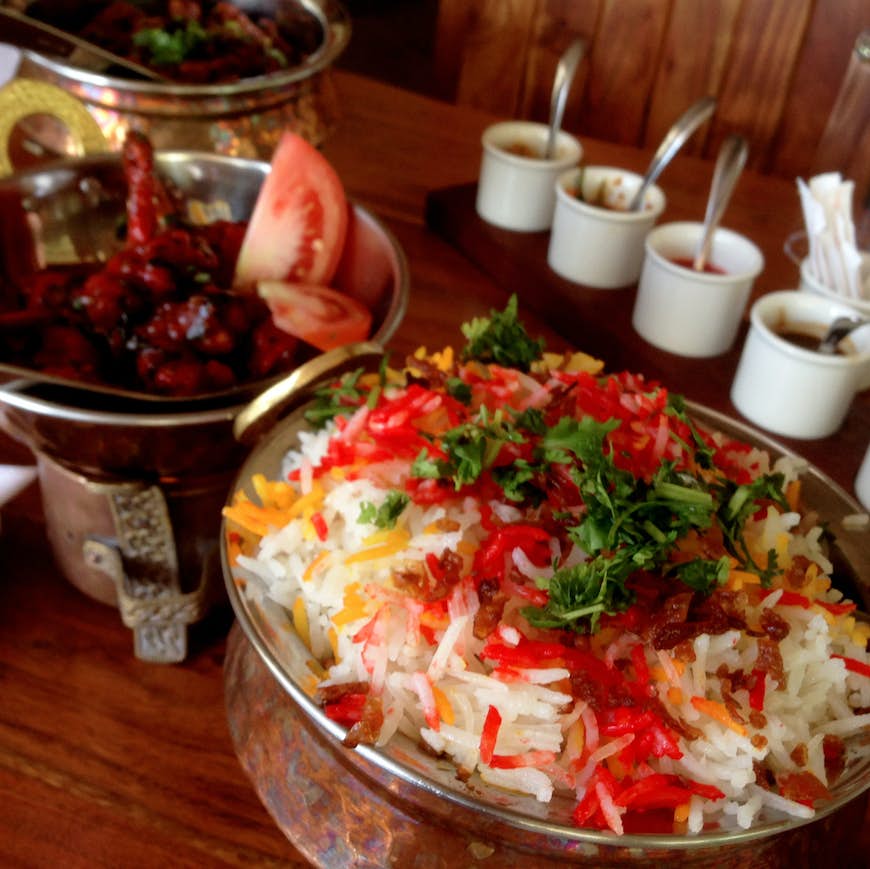 Despite Kenya’s complex cultural influences drawn from as far afield as the Middle East, Asia and Europe, its cuisine is still relatively unknown – at least outside of East Africa. Thanks to a long history of trade along the Swahili coast, spices from India and the Persian Gulf have permeated Kenya’s cooking culture, and the Indian workers brought in by the British Empire during the construction of the Uganda Railway introduced another layer of spicy complexity.

What is true is that the quality of food in Kenya can vary widely. One day you might be feasting on tuna steaks or rich curries with Indian chapatis (flatbread) on the coast or fine dining in the upscale restaurants of Nairobi; the next, you might be limited to “starch and gravy” in a roadhouse at a junction town en route to a national park.

Seek out Kenya’s Muslim-run restaurants – usually identifiable by their green paint and proximity to local mosques – for the richest flavors and most varied spices. That said, the meals you’ll probably remember most are served around a campfire on safaris, with the noises of the savannah adding a soundtrack that could not be matched by any restaurant. Here are the best things to eat and drink in Kenya to get you started on the East African culinary journey.

Make the best of starch and gravy

It’s safe to say that ugali – Kenya’s ubiquitous carb fix of maize (or sometimes cassava) flour that’s boiled into a thick, dough-like mix – is something that takes a little getting used to. It’s the default starch, stodgy but filling, and served alongside a huge range of sides from grilled fish to spicy meat and vegetable sauces. The fact that some restaurants advertise it as “starch and gravy” doesn’t help the sales pitch.

But once you get used to the heavy consistency, ugali grows on you, especially when served with quality sauces. Eat it with your fingers, breaking off hunks of the sticky mixture to dip into the sauce. Avoid wearing white when you do this and don’t leave the ugali in the sauce for long, or the mixture will start to break apart.

Another starch source you’ll see everywhere is irio, a mash made from potatoes and peas, with sweetcorn to add bite. Githeri – boiled beans and corn – is another fill-you-up dish that bulks up smaller portions of meat or fish. Then there’s matoke, another starchy stodge made from mashed green plantains. Plantains also crop up in the hash-like mukimo, alongside sweet potatoes, corn and beans. Your choice of starch and sauce will often come with a side of sukuma wiki (braised or stewed spinach), provided some welcome roughage.

Where to try it: You can’t avoid ugali – it’s served everywhere, particularly at roadhouses along Kenya’s highways and in budget eateries. Often the best version is made by Muslim-run restaurants, where the quality of the sauces elevates the blandness of the starch.

The influence of India has seeped into Kenyan cooking culture, thanks both to trade across the Indian Ocean and the Indian railway workers brought over by the British in colonial times (many of whom stayed and became a vital part of the Kenyan economy). Spiced rice dishes such as biryani and pilau are everywhere, often served with a hunk of chicken or meat in a spicy sauce. Chapatis – a thin wheat flatbread – are another Indian sauce soaker-upper you’ll find all over the country.

For the most satisfyingly complex cooking in Kenya, seek out Indian-run restaurants on the coast around Mombasa, where richly spiced meat kebabs cooked in the tandoor (clay oven), various types of dal (stewed lentils) and fragrant sauces with meat, fish and vegetables are the mainstay.

What you won’t find too widely is the pure veg cuisine of South India – most of the Indian settlers who came to Kenya arrived from Gujarat and Punjab. However, a vegetable thali (a plated meal with rice or chapatis and a mix of veg curries) isn’t hard to find. Samosas (deep-fried pastry triangles stuffed with spiced potatoes and peas or beef) are also ubiquitous.

Where to try it: The ever-popular Haandi Restaurant has branches in Nairobi and Mombasa, serving satisfying Mughlai curries, kebabs from the tandoor and some tasty veg dishes. Mombasa’s Shehnai Restaurant is another top place for a curry fix, but as at many Indian-run restaurants in Kenya, no alcohol is served.

Kenyans are meat-eaters to the core, and meat typically forms part of lunch or an evening meal, even if it’s only a small portion. Goat is the default protein, but you’ll also see plenty of chicken and beef alongside Kenya’s two officially sanctioned game meats: ostrich and crocodile. Meaty sauces are typically soaked up with ugali, chapatis, rice and other starchy sides.

The most visceral Kenyan meat dish is nyama choma (barbecued meat) – a nondescript hunk of muscle crudely chopped into bite-sized chunks, bone and gristle included. A half-kilo portion should sort out your meat cravings, with salad or mash and greens on the side to aid digestion. Nyama choma is served at innumerable food stands and local cafes to accompany cold beers, but it’s usually a little leaner at sit-down restaurants.

Where to try it: Nairobi is a great place to get your fix of flesh (but don’t worry – vegetarians are well-catered for here too). Experience two poles of the carnivore experience at Roadhouse Grill in Kilimani, where the nyama choma is more tender than usual and modestly priced, and Carnivore, a dining institution in Langata, where huge joints of beef, lamb, pork, chicken, and meats from farmed ostriches and crocodiles are barbecued on spears and served carvery style.

Feast on seafood on the Kenyan coast

The waters off the coast of Kenya are rich in seafood, particularly large game fish such as marlin, wahoo and tuna. The lakes and rivers provide abundant freshwater fish, such as tilapia. In resorts on the coast, barbecued seafood is the go-to, but you’ll also find fish, kamba (prawns), uduvi (shrimp), kaa (crab) and pweza (octopus) served wa kupaka style in a coconut-rich curry sauce. Thanks to the influence of seafaring Swahili spice traders, flavorings such as coconut, cloves and cinnamon feature prominently.

Where to try it: The coast is predictably the place to head for great seafood. You’ll find everything from oysters and barbecued tuna to coconut prawn curry and English-style fish and chips at restaurants such as Nautilus and Boatyard in Kilifi and upmarket beach bars such as Nomad and Sails in Diani Beach. For freshwater fish, try Trout Tree Restaurant on the Naro Moru to Nanyuki highway.

Start the day the Kenyan way

Breakfast in Kenya is generally a simple affair. Many locals start the day with chai (sweet, milky tea) accompanied by a mandazi, a semisweet, triangular doughnut. Enjoy them first thing in the morning when they’re freshly made – they become ever more rubbery and less appetizing as the day goes on. Another traditional breakfast dish is uji, a thin, sweet porridge made from millet and corn or sorghum flour, served warm with milk and brown sugar.

Where to try it: Uji and other traditional Kenyan breakfast dishes often appear on the menu at Amaica in Westlands. This restaurant flies the flag for authentic African cooking (views of the Karura Forest are another perk).

The British and other European colonizers didn’t exit Kenya without leaving a mark. Colonial-era hotels still serve high tea, sandwiches and cake, and Kenya Railways runs a tea service on the overnight train from Nairobi to Mombasa. If we’re honest, though, it’s the Americans and Italians who left the biggest footprint on Kenya’s cuisine in the form of pizzas, burgers and fries, which crop up everywhere, though often at the fast-food end of the spectrum.

Where to try it: For European flavors, try Le Rustique in Nanyuki for quality pizzas, Mediterranean dishes and crepes, Talisman in Nairobi for imaginative European fusion cooking, or Baby Marrow in Malindi to soak up the Italian influences on the coast.

Tusker Beer – a pale, German-style lager – is a national institution. The brewery was founded in 1922 and served its first pint at the Stanley Hotel in Nairobi; the name is a reference to the elephant that trampled the brewery’s founder to death when a hunting expedition went awry. It comes in three varieties: standard Tusker, strong Tusker export and full-flavored Tusker Malt.

Kenya has a lively after-work pub culture, and men and women drink together (except in Muslim communities where alcohol is avoided). Craft beers are starting to appear on the scene, and you can also find locally brewed Guinness and various imported beers, most from South Africa.

Kenyan wines are becoming increasingly respected, with some solid whites and reds produced by the vineyards around Lake Naivasha. However, avoid the local papaya wine; it tastes as sickly as it sounds. Otherwise, South African and European imports are the norm.

Spirits range from whiskies, rums and gin to local cocktail creations such as dawa, which translates from Kiswahili as “medicine” – made from vodka, lime and honey. Be very cautious sampling Kenya’s alcoholic homebrews. Pombe beer made from bananas or millet is normally safe enough, but steer clear of chang’a, a potentially deadly brew that’s often laced with methyl alcohol.

For nonalcoholic drinks, the local fruit juices are excellent, particularly on the coast, where freshly blended smoothies made from passion fruit and other tropical delights are all the rage. Locally grown teas and coffees are also excellent.

Where to try it: For a nod to the days when big game hunters would gather at the hotel bar to trade stories of close brushes with death, head to the Lord Delamere Terrace & Bar at the Norfolk Hotel, then shake off the history at hip, modern Nairobi hangouts such as The Alchemist, Brew Bistro & Lounge and the Havana Bar, where DJ sets, cool cocktails and craft beers are the order of the day.

Vegetarian visitors are likely to struggle, as meat features in most meals and many vegetable dishes are cooked in meat stock. But, with a bit of scouting around, you should be able to find something. You may find yourself eating a lot of sukuma wiki (stewed spinach) and githeri (a bean-and-corn mix) – both hearty, if not particularly inspiring, vegetable options. Look for dishes made with beans and avocado to escape Kenya’s carnivorous tendencies.

Many Indian restaurants will provide a vegetarian thali (an all-you-can-eat meal, usually with lentils) that should fill you up. Buying fresh fruit and vegetables in local markets can help relieve the tedium of trying to order around the meat on restaurant menus. Note that most tour operators can cater to special dietary requests (vegetarian, vegan, kosher, halal) with advance notice.