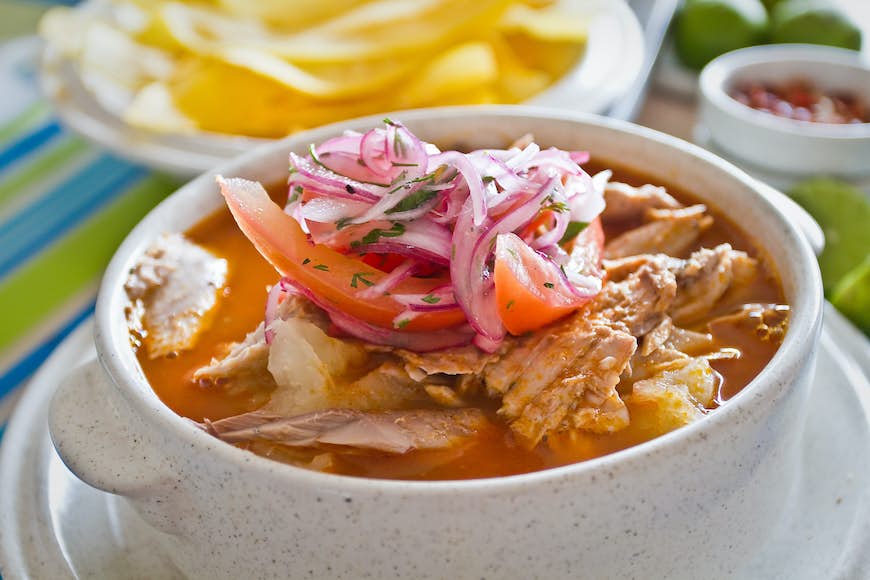 The cuisine of Ecuador varies greatly depending on where you are in the country. Along the coast, seafood reigns supreme, while the Andean highlands feature potatoes, corn, pork and other earthy ingredients.

The Amazon (Oriente region) also has its specialties, including river fish fired up in imaginative ways. Wherever you go, tradition plays a deep role in the cooking, with some recipes predating the arrival of the Spanish colonizers. This guide to dishes and the best places to try them can help you choose the perfect Ecuadorian meal.

Indulge in the seafood of Guayaquil

The lowland city of Guayaquil on Ecuador’s southwest coast has its own culinary hits, including cangrejo (crab), ceviche (more soup-like than its Peruvian cousin), and various rice and seafood combinations. The city’s most famous dish, however, is encebollado (fish stew). It’s eaten at all times of day (even in the morning as a cure for a hangover) and is usually made with tuna or albacore, along with tomato, coriander and the leaves from the cassava shrub. It may also be garnished with pickled red onion rings, ripe avocado, banana chips or bread, plantain, and popcorn.

Where to try it: The upscale Los Cangrejos de Pepe Loza is a top choice for a seafood feast. Many locals consider La Casa del Encebollado to serve the best encebollado in town — as one might expect for a place that has been named after the dish.

Feast on chugchucara in Latacunga

The central highland town of Latacunga draws travelers who come to visit the national park surrounding Cotopaxi volcano, or to explore the indigenous villages along the Quilotoa Loop. Yet the central highland town is also famous for its chugchucara, a tasty plate of fritada (fried chunks of pork, served with mote – hominy), chicharrón (fried pork skin), potatoes, tostada (toasted corn) and other sides. The hearty, calorie-filled meal makes the perfect ending to a day of hiking.

Where to try it: Latacunga’s main market (the mercado cerrado) has food stalls doling out piping-hot servings of chugchucara. There’s also the famous Chugchucaras La Mamá Negra, an atmospheric restaurant where the meal is fired up in a wood-burning oven.

Esmeraldas province on the north coast of Ecuador serves some of the country’s best seafood. With some 70% of the population here of African descent, the cuisine and culture are quite different from other parts of Ecuador. Rather than pork and potatoes, seafood plays a starring role in dishes like encocado, a flavorful fish or mixed seafood stew cooked in coconut milk with spices.

Where to try it: In the seaside town of Sua, the simple, open-sided Restaurante d’Anita serves outstanding encocado as well as other seafood dishes.

One of the most traditional foods of Ecuador’s highlands is cuy, or roasted guinea pig, which is sometimes served on a spit and whole. While some visitors may balk at eating cuy, it has been a highland staple for centuries. (If you’re in Quito, check out the painting of the Last Supper in the Catedral Metropolitana, where Jesus and disciples gather over a plate of cuy.)  Those who’ve tried it know it’s delicious, with a taste somewhere between chicken and duck. It’s also a sustainable and environmentally friendly source of animal protein.

Where to try it: You’ll find cuy sold from market vendors throughout the highlands. For a more upscale experience, book a table at elegant Guajibamba in Cuenca.

The Oriente, Ecuador’s easternmost region, is home to Amazonian jungle and forest-fringed towns where restaurants serve up one-of-a-kind tropical flavors. One dish to seek out is maito, a filet of river fish that’s wrapped in the leaves of bijao, banana or palm and then cooked over a wood fire or charcoal. Maitos can be found in most towns, usually steamed together with plantains or yuca, making a healthy, deliciously filling meal. You might also try the chontacuro, a protein-rich, fat worm that grows in the core of the chonta palm tree.

Where to try it: At El Bijao in the riverside town of Misahuallí, you can order a maito or a skewer of grilled chontacuros while watching mischievous monkeys on the central plaza.

Sweeten your day with an Ecuadorian dessert

No matter where you roam in Ecuador, you’re never far from a bit of sweet temptation. Bakeries, street vendors and restaurants are all good places to browse for a rich dessert. Typically found on the coast, flan de piña (pineapple flan) is sometimes made with coconut or other fruits. It has a custard-like crème brûlée consistency and is flavored with vanilla and rum.

Also popular is the ubiquitous pastel de tres leches (three milk cake), a sponge cake made with evaporated milk, condensed milk and thick cream. It can be topped with cream, syrup or fruit.

Quimbolitos are the sweet tamales of the nation, made with cornflour, butter, eggs, cheese and raisins, and then cooked wrapped in banana leaves or achira leaves.

Where to try them: Overlooking the Plaza Grande in Quito’s historic center, the Dulcería Colonial whips up classic Ecuadorian desserts as well as some of the city’s best coffee drinks.

There aren’t many choices for vegetarians and vegans

Ecuador is a challenging place for vegetarian and vegan diners. Prepare yourself for a diet of corn, potatoes and beans. You’ll find maíz (corn) in many shapes and flavors: humitas are lightly sweetened corn dumplings, steamed and served in the corn husks. Tostada (toasted corn) makes a fine snack and is sometimes served as an appetizer in casual restaurants. On the streets, you can also find vendors selling tortillas de maiz (thin corn pancakes) and choclo (grilled corn).

The Andes are the birthplace of the potato and are accorded a respect they rarely receive elsewhere. Dishes like llapingachos (fried potato and cheese pancakes) and locro de papa (a creamy, sweet potato soup with avocado and cheese) showcase the versatile tuber, though you’ll also find it served as an accompaniment to many non-vegetarian dishes.

Apart from these traditional dishes, Ecuador has a growing number of vegetarian and vegan restaurants. You’ll find the best choices in Quito, Guayaquil and Cuenca.