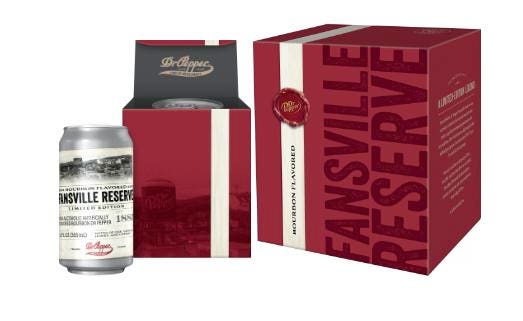 Dr Pepper unveiled its latest limited-edition release today: Dr Pepper Bourbon Flavored Fansville Reserve. The soda was made “as part of the brand’s strong connection to college football” with the idea that it might be something you’d sip on at a tailgate.

If you’re thinking “Sounds interesting, I might grab a 6-pack of that this weekend” Think again. The soda comes as a single can of Dr Pepper, protected with foam in a small burgundy box. The side offers a few suggestions on the origin of the beverage, and the back has a picture of the Fansville water tower. If “Fansville” sounds familiar, it was the name of the brand’s satire college football drama from 2019:

You also can’t actually buy it. If you want to try Dr Pepper Bourbon Flavored Fansville Reserve, you’ll have to win a can through the brand’s Pepper Perks program. That said, the kind folks at Dr Pepper were kind enough to send me a can so I could do a little recon work.

I’ve been preparing for this moment since I was 16. One of the first contests I ever won was a year’s supply of Dr Pepper when I was a sophomore in high school. The prize came in the form of 52 coupons for a free six-pack, and I rocked a bottle of Dr. Pepper in my lunchbox for the entire school year and kept my friends hydrated for our game nights all summer — that’s to say, while high school was a looooong time ago for me I’d still consider myself a bit of a DrPepper connoisseur. If you scroll my Forbes profile you’ll probably notice I’m a bit of a bourbon connoisseur as well, so I’m pretty excited about this challenge.

The big headline going into this is that it’s called “Dr Pepper Bourbon Flavored Fansville Reserve” the key word being flavored. The actual Dr Pepper is alcohol free and is just flavored to taste like bourbon. Bourbon gets a lot of its flavor from the barrels it ages in, so flavors we’re expecting to get out of this include things like vanilla, caramel, and maybe some wood notes.

While I’ve definitely mixed bourbon with Dr Pepper before (it’s a solid combo I definitely recommend), there’s a big difference between having a Dr. Pepper with a little bourbon in it and having a Dr Pepper meant to taste like bourbon. There’s also a big difference between having a neat pour of a few ounces of bourbon and drinking a 12oz can, so there are a few variables at play here.

Similar to how I taste whiskey, I tried this one both “neat” chilled right out of the can as well as “on the rocks” with a lot of ice. I’m typically an ice fan when it comes to sodas, but a neat fan when it comes to bourbon, so I feel like it’s important to try the hybrid both ways.

On the nose you get that distinctive Dr Pepper smell right out of the can from the moment you crack it open. It actually smells so much like a Dr Pepper I would have identified it immediately.The same goes for the pour. All signs are pointing to this just being a normal Dr Pepper.

On the palate, you also get more Dr Pepper than bourbon; however, there are subtle notes of vanilla and especially honey that make it taste somehow sweeter than a traditional Dr Pepper. I wouldn’t immediately call out “bourbon” as what’s happening here, but it is different.

Ice really makes this one sing. While normally the colder your drink is the less flavor it has, the ice really brought out a lot of the more subtle flavors in the Dr Pepper Bourbon Flavored Fansville Reserve.

On the nose I got a bit of the oak from the iced iteration. On the palate there were pronounced notes of cherry, stronger than the honey and vanilla we got on the neat version. The sweetness isn’t as pronounced in the iced serve as the can straight out of the fridge, but it is still there, and vanilla and honey lingers on the palate after each sip as well as a little hint of oak.

Having had a few too many “bourbon aged” beers that essentially taste like a 12oz bourbon, I went into this pretty skeptical. Both iterations I would say were very drinkable and exactly what I would expect opening a can of Dr Pepper. The base is that distinctive Dr Pepper flavor, but there’s just the slight hint of something extra. The “something extra” is really well balanced, and unlike some novelty sodas I could drink a full iced can of this with no issue.

If you want to get a can of your own to try the only way to snag one is through Dr Pepper’s Pepper Perks program. The rewards programs gives you points for buying Dr Pepper products that you can redeem for things like shirts and hats as well as “scratch tickets” where you might potentially win a can of the good stuff.

If you’re not a Dr Pepper shopper, fear not. Everyone gets a free scratch ticket every day through the middle of next month on the site, so you still might be able to win. Cans are available “while supplies last.”