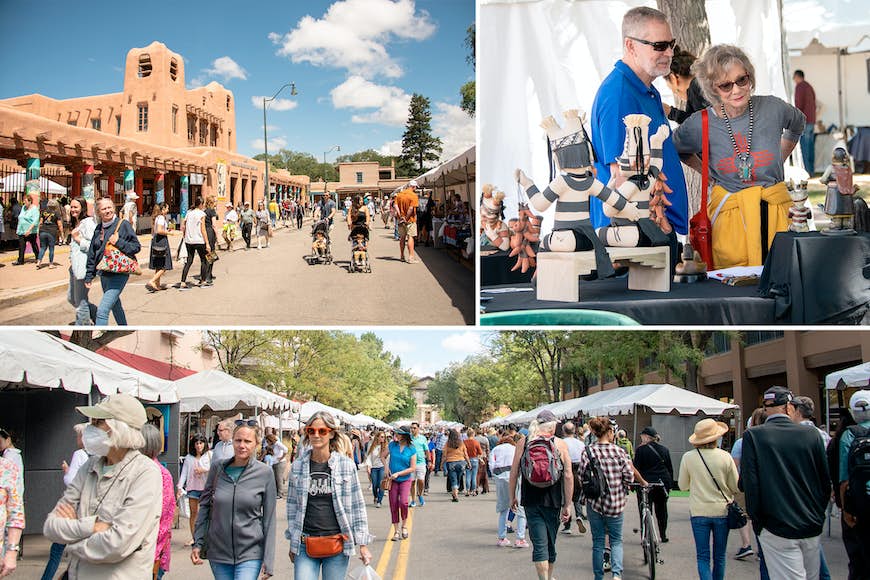 Perspectives by Lonely Planet is a series devoted to starting conversations. In this feature, writer Simon Moya-Smith visits the 100th annual Santa Fe Indian Market and finds that, even a century on, old habits die hard.

Everything was in full swing two blocks away, where I could hear laughter, drums, the sound of a jingle dress and a chorus of “oohs” and “ahs” from a herd of folks who’d just trundled into town.

Native people from as far north as Anchorage, Alaska and as far east as Brooklyn, New York rolled into Santa Fe, New Mexico, to sell their wares, sing songs, paint paintings, and show off their latest duds while the who’s who of Indian country came to rub elbows. Thousands of non-Indigenous people also flooded into town, including folks who, judging by their open-mouthed gapes, seemed to just want to get a glimpse of what real Natives look like. It was, after all, the 100th anniversary of the Santa Fe Indian Market, an annual event showcasing some of the top artists from across the continent. Rumor had it that the price of hotel rooms in the area had skyrocketed to $1200 a night (“White people prices,” my Ojibwe buddy complained).

It was Saturday afternoon, the third day of the four-day market, when I wandered into the lounge of the posh Hotel St. Francis. Half-drunk glasses of Chardonnay littered the tables. Despite the crowds, I found an unoccupied table between two groups of white folks in wide-brimmed hats and jean shirts. I opened my notebook “There’s no real way to express it – what it’s like to be a fetish in a room loaded with those who have a fetish for you,” I wrote. “They want to touch your hair. Your face. Your feet.” That Native people have historically been fetishized – in Hollywood, in history books, on holidays like Thanksgiving — isn’t breaking news. If you’re Native, you’re used to getting stared down like a celebrity. You almost expect people to ask you to sign their dreamcatcher as you walk by.

Suddenly, my thoughts were disrupted by the sound of boot heels and spurs on the tile floor. A massive white man with a handlebar mustache and a cowboy hat waltzed into the room like it was a saloon in the year 1888. He sat at the bar, flipped his chair around toward the entryway, and watched us. Two drinks later, he was gone.

Fast forward a few hours, and I saw him again, appearing out of nowhere like a bad apparition of General George Armstrong Custer, the famous (and, all-too-often, heralded) murderer of Native people. I needed to know what was up with this ghost of an old, dead general. Near Evangelo’s, a dive joint, I approached him, introduced myself and offered to buy him a drink.

Once we were at the bar, he didn’t waste a second before beginning the underhanded insults. “If you know you’re not Indians, why do you call yourself Indians?” he asked.

“Pick what?” he responded, looking a bit frustrated.

I explained how Natives identify ourselves, that Swinomish, Yu’pik, Oglala, Oneida and so on are names of the languages and the peoples who speak them. “See?” I said. “You guys get confused if we refer to ourselves by our nations and tribes.”

He ruffled his mustache, said nothing, and took another sip of his whiskey.

“By the way,” I asked, “why would you dress like a cowboy at event with ‘Indians?’” (I put extra emphasis on the air-quotes around “Indians.”) “Wouldn’t you say it’s a little out of taste to dress like the oppressor at an event held by the people the cowboys oppressed?”

He pushed his chair back, which made a grating sound on the floor, finished his drink in one swift gulp, stood up and put his hand on my shoulder.

The ghost of General Custer walked out the door, leaving me with deep thoughts, anger and more notes.

There are many people like that jackal who come to Indigenous events and do all kinds of awful things, some even with the sole purpose of offending or flaunting their power. There are stories of tourists grabbing braids, beads, feathers, anything that’s on your body, really, and touching people’s faces and snapping photos of Indigenous vendors and visitors when they’re not looking.

Sometimes it makes me wonder, what is the difference between the hoards visiting a zoo and those who come to the Santa Fe Indian Market and stare at us?

The fact that I so often find myself asking questions like this doesn’t mean non-Native people shouldn’t come to our events, only that they should consider how to respectfully navigate Native spaces. Come with an even cursory knowledge of the past and present. Treat us like humans, not novelties. Not relics of the days of yore. Not objects to be fondled. Don’t stare and whisper. Don’t snap photos of us without our permission. Don’t tell us you’re “a quarter Cherokee” as an excuse to snap that photo. And definitely do not come wearing Cleveland Indians shirts, Washington R******* hats, or any other wretched form of Indian mascotry or dressed like a dead general with a grudge. Simple enough. Play, pay and, better yet, pay while considering the money you’re spending a form of rent. This is stolen Native land, after all.

Read more: How this Minneapolis chef is reintroducing Native American cuisine to the world

Later that day, I found myself writing frantically: “buy from Indigenous folks only,” over and over again as if to take my mind off the man and his vicious 19th-century-style bigotry. Because even though you’re relatively safe from the imitators at an Indian Market, there are still a lot of fakers and shills out there, all over the world, who want to fleece you with snake oil in the shape of dreamcatchers or art pieces or pottery. They use language like “authentically made” (real Native artists don’t need to say so) and wear buckskin to reel you in. Just because someone claims to be Indigenous doesn’t always mean they are. So be sure to buy Indigenous art from real Indigenous artists.

It was growing late, and I was craving wings or shrimp or anything other than the wildly expensive tacos that crowded the area near the plaza, where most of the Santa Fe Indian Market action takes place. Diannah Reid, a Diné model and buddy from Brooklyn, joined me for a bite. We were only about ten minutes into our Bang-Bang Shrimp when four white women approached us.

“What’s your booth?” one lady asked, pointing at my necklace, which is made of beads and buffalo bone.

I was chewing on a mouthful of food, so it gave me time to come back with something witty. It’s a kissing booth, I considered saying.

A look of disappointment fell across her face, and she turned away, saying nothing in response.

“Why do they always assume things?” Diannah said.

“Don’t assume” is an age-old tip, but there are other things you can do as a visitor to a space like the Indian Market as well. While wandering the market, I overheard a white man tell a Native vendor, “Please forgive my ignorance. I didn’t know.” “Sweet jeezus,” I thought. “Imagine if every non-Native admitted that to themselves from time to time?” This man went in with complete humility and a willingness to learn. It’s something we need more of – not just in Indigenous spaces like the Indian Market, but everywhere.

In between sniffing out wannabeism and calling out casual racism, I did find a few things to revel in. They are the same things that bring me back to the market year after year. We rang bells, we cried, we laughed, and we laughed while crying. We enjoyed ourselves, despite the incidents of aggression, both passive and otherwise. That’s the Indigenous way.

One night, we took over the music hall at the Buffalo Thunder Resort Casino just north of town. Make love not war was the energy, and love was made. As the band played on stage, two Natives made out by the front door without a care in the world. Elsewhere, bad blood between two old enemies gave way to calmer tides; “she did that to you, too, huh?” one said to the other. It was our safe space, if only for a few hours.

“Somewhere, right now, someone got their snag,” I said to a friend (“snag” is Native-speak for getting a date or even just getting laid.) But I think she was too focused on doing her own snagging to pay me any mind.

There’s nothing in this world more beautiful to me than Natives, frybread, good people and good people enjoying frybread. And that’s who and what we want at our pow wows, markets and meet-ups, especially in Santa Fe. Be the one who asks permission to take the photo, who admits their mistakes and who comes to learn. Because after 530 years of this madness, we’re still asking: “Who are the good white folks, and who are the bad ones?”​