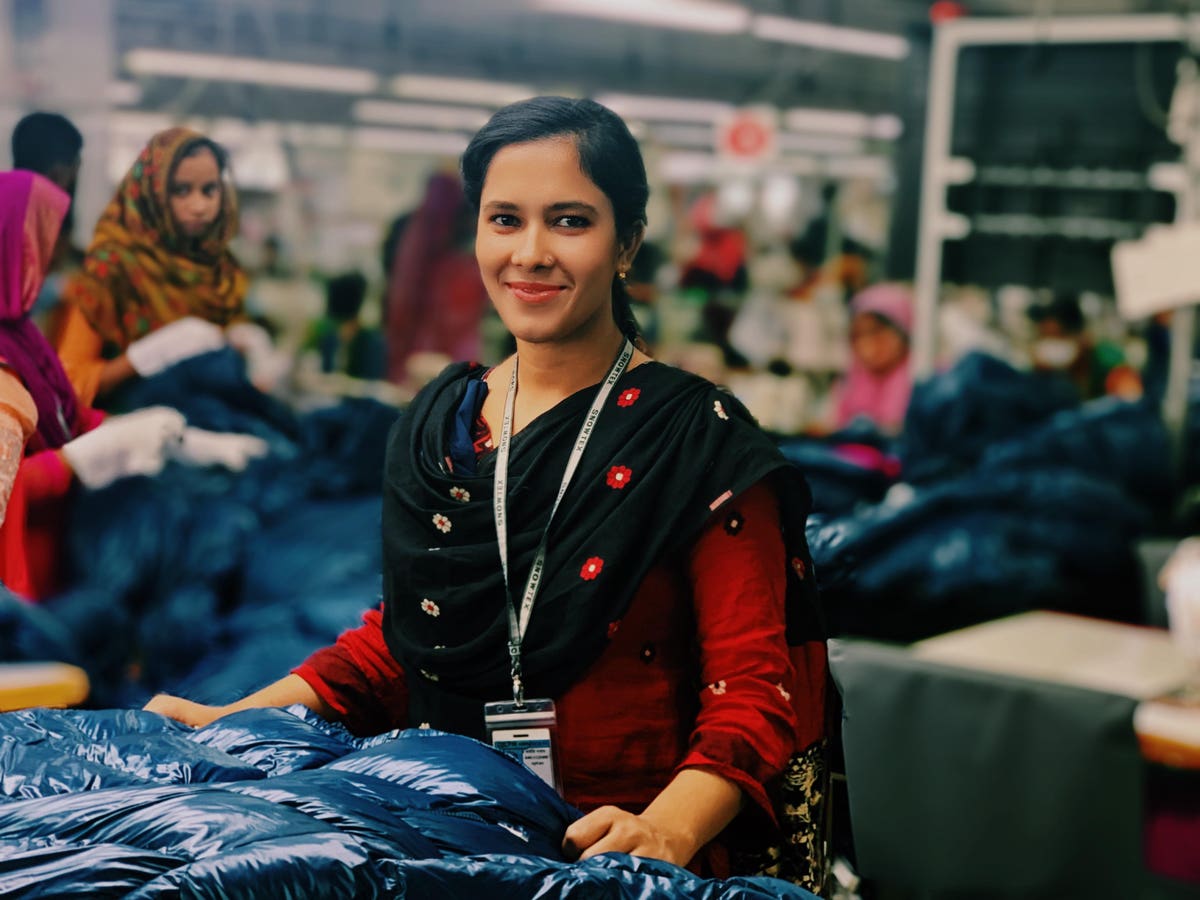 Despite the size and global dominance of Bangladesh’s ready made garment (RMG) industry, which claims a 6.8% global market share and is the second largest exporter after China, studies have found the South Asian country to have one of the lowest productivity rates per-worker globally. Among the primary reasons identified for worker inefficiency is inadequate nutrition, particularly among women, whose output is further compromised by the impact of traditional, unpaid family responsibilities.

Some 2.5 million women— comprising 60% of the RMG workforce— play a significant role in the performance of a sector that drives 84% of all exports and as much as 20% of GDP. UNICEF estimates that “the industry’s estimated 3,500 export-oriented factories are believed to either directly or indirectly support the livelihoods of more than 25 million people, particularly women and children.”

Three years ago, garment worker Sadika Tun Nesa and her younger sister migrated to Dhaka, the capital city of Bangladesh, from their home in Satkhira, a southwestern district some five hours away, in search of a better life for themselves and their five-member family.

When they arrived to the city, Sadika and her sister were no different from many of their peers, frequently skipping breakfast, often waiting until the afternoon to eat a carbohydrate-heavy meal— their first meal of the day. Their micro-nutrient and protein intake was poor.

The sisters would quickly learn to sew and were hired by a large garment factory in Dhamrai, about an hour outside the city.

Snowtex Outerwear Limited, where Sadika and her sister are employed, manufactures and supplies clothing and fashion products to multinational companies, with popular names such as Columbia Sportswear, North Face, Timberland, and Mango relying on the output of its female-dominant workforce.

In the highly competitive global garment sector, productivity can be a deciding factor between the winners and the losers. Optimal performance is required from RMG workers.

But, as her workload grew, Sadika describes how she found it hard to maintain the energy required to be as productive as the job required.

“I would frequently suffer from fatigue, weakness and nausea,” she says. She would soon learn that she was anemic— and she was not alone.

According to National Nutrition Services in Bangladesh, anemia— a health condition characterized by low levels of hemoglobin in which blood has fewer red blood cells— has been getting worse with time among the country’s female population. The trend has been even more severe among female garment workers, 77% of whom are estimated to be anemic— considerably higher than the national prevalence of 41.8%.

Anemia is associated with fatigue, reduced physical activity, impaired cognitive capacities, and reduced work productivity, and is most frequently caused by inadequate nutrition.

According the the Global Burden of Disease survey, in Bangladesh, malnutrition is the most significant driver of death and disability combined. Nutritional anemia, as well as deficiencies in zinc, iron and iodine are the most prevalent micro-nutrient problems among the population.

The program was named Strengthening Workers’ Access to Pertinent Nutrition Opportunities or SWAPNO, a Bengali word meaning dream. Not simply a play on words, the project would turn out to be a dream come true and a potential life saver for the staff at the garment factory.

At the start of the program, Sadika was among a handful of staff selected to be Pushti Bondhu— influencers or champions who would educate their co-workers on proper nutritional practices. They were trained in basic nutrition, food systems, diversified food, and hygiene.

Pushti in Bengali is a word that means nutrition or nourishment. Bondhu means friend. Due to time constraints during factory working hours, these project champions were entrusted with leadership of the SWAPNO project.

As a Pushti Bondhu, Sadika became a nutritional role model among her colleagues, her peers and her family. She continues to play a major role in improving the nutritional knowledge of female garment workers at Snowtex, resulting in improvements in their overall health and productivity, which has also had positive spillover effects at the household level.

These days, Sadika— a devout Muslim— wakes up at 5 a.m. for the Fajr prayer, eats a healthy breakfast and makes her way to the garment factory, where she works in quality assurance. She has become a proponent of healthy nutrition behaviors and incorporates these into her life, both at home and at work. She now consumes three meals a day and encourages her co-workers to do the same.

The sewing floor of Snowtex features a combination of modular and assembly line systems occupied by thousands of employees who seem relaxed, diligent and alert. Due to a variety of measures taken by management, morale is high and the attrition rate is at below 5%. When I meet Sadika, she is busy inspecting a down jacket and is energetic and in good spirits. She quickly finishes her work before taking a break for lunch.

Snowtex’s lunchroom is just as impressive as the sewing room floor— albeit more social. Thousands of people— from the most junior to the most senior of personnel— are collectively fed the same high quality, nutritious and safe meals guaranteed by an on-site food lab, in an expansive dining space with open seating.

I watch as workers take their pick from massive drums of fresh food made of highly nutritious and fortified ingredients including vegetables, legumes, fish, meat, eggs, fortified rice, edible oil fortified with Vitamin A and iodized salt— ensuring that they have sufficient energy to do their jobs efficiently while supporting optimal health.

Sadika tells me that she looks forward to and enjoys her lunch which is always healthy and filling without slowing her down.

She says that she has learned to reduce the proportion of carbohydrates in her meals and has increased the amount of fish and vegetables that she eats. She makes sure to include a vitamin C source in her lunch and follows her meal with an Iron Folate Acid (IFA) tablet which is provided as a service by the government and has been made conveniently accessible to all staff by GAIN.

“We feel it is our duty to ensure a healthy life for our workers,” says S.M. Khaled, Managing Director of Snowtex. “That’s why we came up with the plan to provide quality lunch. If they eat healthy, they stay fit, which serves both the workers and the company.”

There is a large evidence base to support the premise that anemia adversely impacts occupational performance, while intervention with iron can have a positive impact on worker productivity. According to an independent study commissioned by GAIN, the full package of interventions put into place under the SWAPNO project has the potential to improve anemia rates by up to 32%.

Health investment at factories such as Snowtex produce dividends in the form of enhanced productivity, better quality products, a decline in sick leave and improved employee morale.

“I might not make a lot of money, but now I know how to keep healthy,” says Sadika, as she shares some of the ways that the SWAPNO project has changed her nutritional habits and by extension, her life.

“I always include a seasonal fruit on my shopping list… I know how much of each nutrient I should be buying and eating… I am trying to educate my family on how to live a better life… This for me is priceless.”