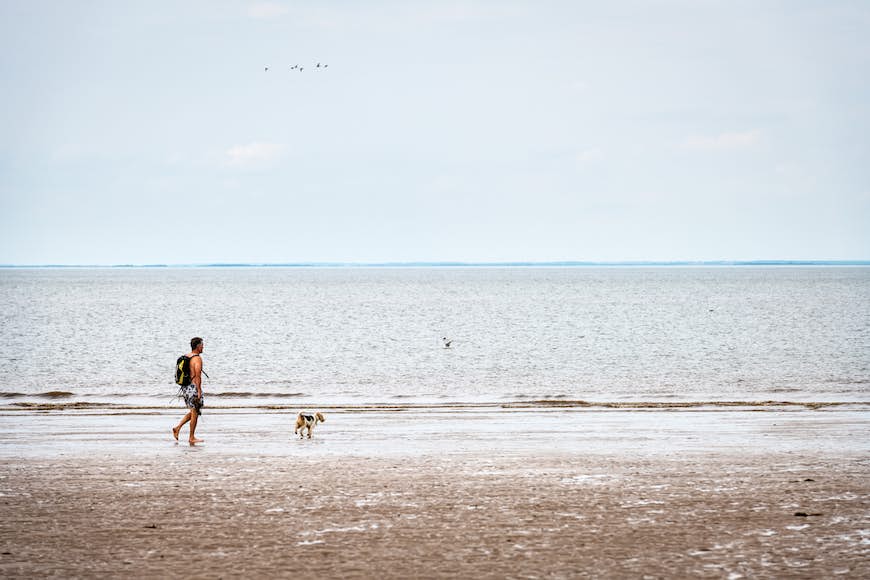 The English seaside has a reputation for honking, beeping amusements, noisy stag parties and persistent breezes that necessitate erecting a wind-break to keep the sand out of your sandwiches.

That’s one side to the English seaside. The other side is wonderful, wild stretches of sand running to the distant horizon, seafood experiences on the shoreline, barreling surf, buffeting winds for kitesurfing and windsurfing and sand so white it would give the Caribbean a run for its money.

Whether your tastes run to classic seaside resorts, urban beaches or long, lonely sands, you’ll find a beach in England that lives up to your fantasy. Here’s our guide to the best of England’s sand and shingle shores.

Discover the world’s most intriguing experiences with our weekly newsletter delivered straight to your inbox.

Not content with being one of England’s most impressive country houses, gorgeous Holkham Hall also looks after the stunning Holkham National Nature Reserve and Beach, arguably Norfolk’s most perfect strip of dune-backed sand.

As with all beaches on the north Norfolk coast, it’s reached via a long hike across the marshes, but what waits at the end would not look out of place on America’s Atlantic coast – endless sand and tufted dunes wafted by steady sea breezes. Set aside time to explore Holkham Hall, a magnificent Palladian villa built to house the Grand Tour treasures of the first Earl of Leicester.

Planning tip: The Lynx Coastliner bus provides easy access to a string of marsh-backed beaches around Holkham, from under-explored Brancaster to the charming beach resort of Wells-next-the-Sea. From Wells, Sanders Coaches’ Coasthopper runs east all the way to the Victorian resort of Cromer.

Brighton Beach won’t win any prizes for sand or serenity, but its collection of piers, seaside amusements, faded (and revitalized) seafront hotels and kiss-me-quick nightlife is the living image of the English seaside. Brighton’s status as a hub for international students, clubbers and the LGBTIQ+ community only adds to the fun.

On summer weekends, you may struggle to find space for a towel on the steep ramp of pebbles dropping down to the water, but the promenade runs for miles, the pier is crammed with rides and arcade machines, fish-and-chip shops abound and there’s plenty to do inland, from the wedding-cake-like Royal Pavilion to the quirky shops and cafes tucked away on the lanes behind the beach.

Planning tip: After braving the summer crowds, head for the hills – more specifically, the hills of the South Downs – for some well-deserved quiet. This wonderful sweep of high chalk grassland starts immediately north of Brighton, traversed by the lovely South Downs Way walking path.

The beaches of Devon are second only to the sands of Cornwall in the eyes of holiday-makers, and lovely Woolacombe Beach near Barnstaple is a real beauty. Three miles of broad golden sands, reliable surf breaks and a backdrop of rolling green hills keep families happy from dawn till dusk. The tucked-away location in north Devon dampens down the crowds, though it still gets busy in summer.

In the unlikely event that you tire of the sand, walking trails crisscross the emerald hills of the North Devon Coast Area of Outstanding Natural Beauty immediately inland from the beach.

The allure of this cozy cove at Broadstairs in Kent comes partly from its cute, cliff-enclosed curve of sand and partly from the journey back in time it offers to sun-seekers. On the lanes that slope down to the beach, Italian-owned gelaterias serve authentic gelato behind 1950s facades, while an old-fashioned Punch and Judy show entertains the tots out on the sand.

As afternoon turns to evening, browse the superior restaurants in the streets above the beach – the food at the Little Sicilian is the real Italian deal.

Planning tip: The Kent coast rail line provides easy access to Broadstairs from London, looping around to nearby Ramsgate and Margate, each with their own stretches of sandy beach. Margate is loud and lively, with a famous amusement park, while Ramsgate is more genteel, with a broad public beach and some interesting secondhand stores.

Northern England’s riposte to Brighton Beach, Blackpool Beach is long, sandy and lapped by gentle breakers, making it ideal for families, who gather in droves to paddle in the shallows and walk along the broad, wave-patterned sand at low tide. Behind the beach is one of England’s most famous amusement strips, promising oodles of seaside fun.

Take your pick from seafront pubs, fish-and-chip takeaways and tacky arcades full of slot machines, or the thrills and spills of Blackpool Pleasure Beach and the views from the Blackpool Tower. It’s everything you’d expect from the English seaside, but the noise and crowds might send some visitors fleeing for the hills.

Best beach for appreciating the elements

With golden sand and butterfly-blue waters, Cornwall’s beaches nudge close to Caribbean and South Pacific territory, only without the palms and with breaded scampi in place of barbecued conch. The sandy strips in busy tourist hubs such as Penzance, St Ives and Porthcurno are mobbed in summer, and the crowds can get so overwhelming that football pitches are pressed into service as overflow car parks.

We rate Cornwall’s quieter beaches, such as wave-lashed, rock-strewn Kynance Cove on the Lizard Peninsula, where fingers of white sand curl between craggy outcrops, churning white horses fill the air with spray and the steep walk down from the car park deters fair-weather beachgoers.

Planning tip: Cornwall is England’s top surfing spot, with some of the best waves between October and April, when the tourist crowds thin out. The most famous breaks are around Newquay and Bude in North Cornwall; for first timers, the wide beach at Polzeath has a surf school and plenty of space to practice.

What’s not to like about a beach with a castle? Beaches get wider and wilder (and a little colder in summer) as you head north in England, but the sands at Bamburgh are astonishingly lovely and backed by the looming ramparts of Bamburgh Castle, used by English kings before being revamped by the Victorian industrialist William Armstrong.

A fine spot for windswept walks, the beach faces the Farne Islands – thronged by birdlife and home to a busy monastic community before Henry VIII’s destructive falling out with the Catholic church – and walking paths continue along the shore to more coves, caves and castles.

Suffolk has seaside towns aplenty, but eccentric Southwold stands out from the pack for its calm manner, dainty town center and pretty collection of beaches, from the groyne-crossed sands near the pier to the dune-flanked Denes Beach, which feels like a wilderness despite being strolling distance from the High Street.

The town behind the sand is rather lovely too, with a central lighthouse, the fascinating satirical arcade machines of the Under the Pier Show and lovely wafting smells from the Adnams Brewery.

Planning tip: Southwold is a great base for exploring the bird-filled nature reserves of the Suffolk Coast. Bitterns, curlews and marsh harriers are just some of the species spotted in the beach-fronted coastal marshes at RSPB Minsmere and Dunwich Heath.

It’s not just the appealing sand that earns Whitby Beach a place on the list, it’s the setting. This wide, shallow strand is backed by a row of rainbow-colored beach huts and the houses of Whitby rising steeply to the spectral ruins of Whitby Abbey.

Amongst other claims to fame, this was the spot where the world’s most famous vampire made landfall in England as he pursued his would-be bride in Bram Stoker’s Dracula. It’s a quintessentially English spot, and good for families as well as goths and horror fans.

Planning tip: After visiting the beach and abbey, head for the upliftingly beautiful trails of North York Moors National Park for some peaceful contemplation.

The indented strip of coastline facing the Isle of Wight is dotted with beaches that draw kitesurfers and windsurfers like moths to a flame. The beaches at Bournemouth and Sandbanks near Poole are famous hubs for board enthusiasts, but we suggest evading the crowds at nearby West Wittering, at the mouth of Chichester harbor in West Sussex.

This wide and wonderful Blue Flag–rated beach has fine sand, a collar of dunes and shallow waters that are ideal for surfing, windsurfing, kite-boarding and stand-up paddleboarding.

Planning tip: If you need help getting out onto the water, lessons in surfing, windsurfing, kite-boarding and stand-up paddleboarding are offered by 2XS, just back from the sand near the beach cafe and car park.