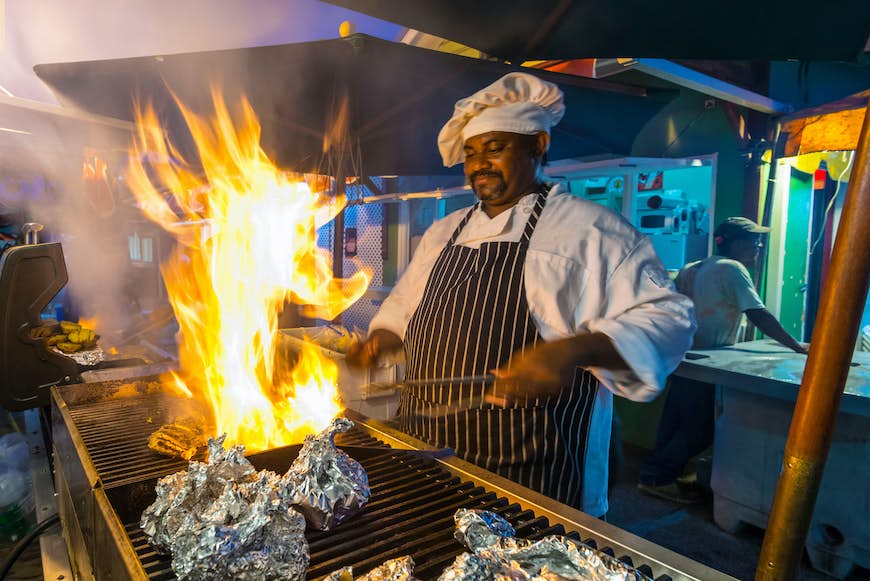 From tiny waterside shacks with only fried fish on the menu to elegant fine-dining restaurants overlooking tranquil ports, the food in Barbados is reason enough to leave the beach and get out and explore.

Not surprisingly, considering Barbados’ rich cultural history, Bajan food is a world of flavors, with European, African and even Indian influences all working their magic on the island’s natural bounty. Seafood is the star of many of the most popular dishes, but Bajan cuisine is surprisingly diverse, and even repeat visitors will always find something new to try.

Fill up at a fish fry

Equal parts party and barbecue, the fish fry is one of Barbados’ most loved culinary traditions and the best way to relax after work. Despite its name, most of the fish comes off the grill; take your pick of perfectly seasoned snapper, delicious conch, or barracuda served with a choice of typical sides such as mac pie, fried breadfruit, plantain and rice and peas.

Note that “dolphin” on the menu is the local name for mahi-mahi – not a bottled-nosed friend. After the plates are cleared, hang around to dance or just socialize over some cold Banks beers.

Where to try it: Oistins Fish Fry on Friday or Martin’s Bay Tavern on Thursday.

Explore the world in comfort with the latest travel insight from our weekly newsletter delivered to your inbox.

If you take a boat cruise off Barbados, you’ll probably spot flying fish jumping out of the water and gliding just above the surface for incredible distances. The abundance of the species in these waters has led to it becoming an integral part of Bajan cuisine.

Where to try it: Mustor’s Restaurant, Bridgetown.

Cool off with a mauby drink

Made by boiling the bark of the mauby tree with nutmeg, cinnamon cloves and other spices and served over ice, refreshing mauby is a popular addition to meals across the island. It is also said to have many health benefits. If that all sounds too wholesome, mauby syrup also makes an appearance in some pretty good local cocktails.

Where to try it: Street vendors across Bridgetown – look out for the ice chests.

Get tipsy in Bajan rum shops

Barbados’ rum credentials are unrivaled; the very first drop of the liquor was distilled on the sugar plantations of the island, home to the oldest functioning rum distillery in the world. Visitors can explore that site, but for a more cultural experience, head to one of the island’s hundreds of rum shops.

Often little more than a wooden counter with a bunch of bottles behind the bar, rum shops are a cultural institution and the best place to try each of Barbados’ many varieties while getting to know some local characters.

Where to try it: Along Baxter’s Road or Bay Street in Bridgetown – look for the hand-painted signs advertising booze outside.

Beat a hangover with pudding and souse

If one dish best represents the influence of gloriously stodgy British comfort food on Bajan cooking, it’s pudding and souse — pickled pork served with boiled sweet potatoes seasoned with herbs. Believed to have originated as slave food on Barbados’ sugar plantations, it’s now a popular weekend meal across the island, perhaps due to its legendary hangover-busting properties.

Where to try it: Golden Sands Hotel Restaurant, Maxwell.

Traditional Caribbean baking is an art in decline, but fortunately, Barbados still has some outstanding bakers working the old-school way. Wonderfully sweet, spice-infused fruit pastries are the perfect picnic food. Among the absolute must-tries are currant slices– a firm rolled pastry – and coconut turnovers – a sweet bread stuffed with grated coconut.

Where to try it: PRC Bakery, Speightstown.

Grab a cutter to go

While it might appear to be just a sandwich at first glance, once you bite into a Bajan cutter, you’ll soon realize why they’re such an integral part of island culture. The classic version contains a fried fish filet, but you can find all kinds of cutters, from simple cheese varieties in local stores to gourmet offerings combining a riot of flavors. The one thing they all have in common is that they must be served on a freshly baked traditional salt-bread roll. If you’re going out partying, Bajan drinkers love to finish the night with a couple of liver cutters (the island version of a late-night kebab).

Where to try it: Pebbles Beach; Baxter’s Road; Cutters of Barbados, Crane.

Found everywhere, from bus stations to vendors on the beach, Barbados’ favorite snack is made from deep-fried salted cod and is the perfect accompaniment to ice-cold beers or to boost energy while sightseeing. Every outlet has its secret blend of spices, so it’s worth trying a few.

Where to try it: Cheapside Market, Bridgetown.

Like a sweet Caribbean tamal, the conkie is made of corn meal seasoned with pumpkin, sweet potato, coconut, raisins and spices steamed in a banana leaf. They’re traditionally prepared during November to celebrate independence but can usually be found at other times of the year.

Where to try it: Numerous restaurants across the island sell conkies in November.

Roll up for a roti

Arriving in Barbados from the sub-continent via neighboring Trinidad and Tobago, the roti may not be the most traditional of Bajan meals, but it has become a hugely popular component of modern Barbadian cuisine.

Cheap and filling, the roti is an unleavened flatbread packed with any number of fillings and rolled into a burrito-like tube. Popular choices include shrimp, chicken curry, and beef curry served with or without potatoes. Be aware that the cheaper rotis tend to include bones, which can be a tooth-breaking surprise. However, there are usually boneless options on most menus.

Where to try it: The Roti Den, Paynes Bay or India Grill Bridgetown.

Spice it up with Bajan Hot Sauce

Most Bajan food is not particularly spicy when served because the spice is already on the table in the form of powerful homemade hot sauces. Influenced by Trinidadian sauces, vinegary yellow Bajan Hot Sauce combines both mustard and chili flavors and packs plenty of punch.

Where to try it: Everywhere.

Make a toast with rum punch

While Barbadian Rum is excellent to drink neat, there’s nothing better on a lazy island afternoon than a glass of Bajan rum punch. Authentic Bajan punch only uses the darkest varieties of Rum mixed with lemon juice, water and bitters with a nutmeg garnish. It’s deceptively strong – you’ve been warned!

Where to try it: Atlantis Restaurant, Bathsheba; or the Barbados Yacht Club.

At first glance, traditional Barbadian cuisine is not the most vegetarian-friendly, but vegetarians and vegans can eat very well with a little effort. Most resorts and big hotels have a wide selection of vegetable-based dishes, but in local restaurants, vegetarian mains are often scarce, although most side dishes are meat-free and can be combined into a pretty tasty little platter.

There are a couple of tasty vegetarian-orientated cafes on the populated southwest coast. Elsewhere, keep an eye out for roti shops, which usually have a vegetable curry option in addition to Trinidadian-style “doubles” filled with spiced chickpeas.