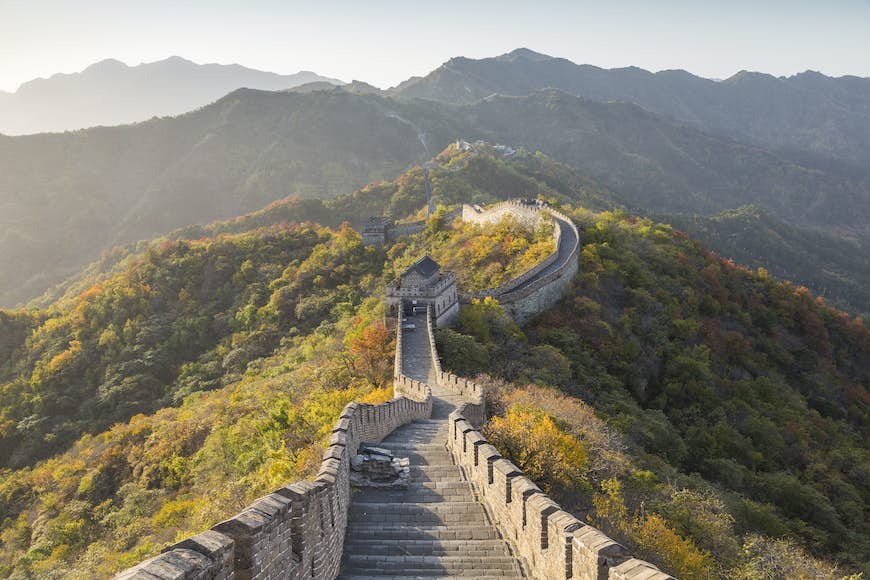 Beijing offers a dizzying amount of things to see and do, but its appeal extends well beyond the confines of the city. Within easy reach are Ming dynasty tombs, ancient villages, the Great Wall and even enthralling glass-bottom bridges dangling over a gorge – all memorable ways to spend a day.

As much as we love China’s capital, the pollution and the traffic jams aren’t exactly draws. But all it takes is a short trip out of town and you’ll soon be immersed in stunning forested mountain surrounds. If you’re looking to escape the city, here are our top five getaways.

Discover the world’s most intriguing experiences with our weekly newsletter delivered straight to your inbox.

Get out along the Great Wall of China

Snaking along the mist-cloaked mountains into the far distance on its epic 21,196km (13,171-mile) journey, the Great Wall simply does not disappoint. In fact, great doesn’t quite cut it – extraordinary, unmissable and astonishing are more fitting superlatives.

Beijing is one of the best places to access it; the trick, however, is to pick the section that best suits your tastes and needs. Do you prefer it more wild and remote? Or maybe somewhere more polished and restored? Are you here for a long hike, or is a cable-car ride more your style?

Just 70km (43 miles) from the capital, the Mutianyu and Badaling restored sections of the wall are the most popular day trips from Beijing, and certainly the most accessible. The views are astounding, and it’s easy to navigate with cable cars, chairlifts and even toboggans, so it’s very much geared towards the tourist buses.

At the other end of the scale, you have the lesser-visited sections: Jinshanling, Jiankou, Huanghua Cheng and Zhuangdaokou, which offer a more serene and wild experience, with half-crumbling walls that give it a more authentic, off-the-beaten-track feel.

How to get to the Great Wall from Beijing:

Badaling is by far the easiest section of the wall to reach, thanks to a new high-speed train that takes only 30 minutes. There’s public transport to all the sections, but the route involves a fiddly string of bus connections; instead, aim for one of the direct tourist buses departing from Dongzhimen Transport Hub.

But if you can stretch your budget to book a private car, that is by far the best option, especially if you’re in a group – you’ll  have the comfort of door-to-door access and a speedier trip. Expect to pay ¥500 to ¥1200 for a day trip by car from Beijing. Otherwise, consider joining an organized tour with Beijing Hikers or Wild Wall Experiences.

You’ve probably already paid a visit to the home of Ming-dynasty emperors at the Forbidden City; now it’s time to make a trip to see their final resting place at the Unesco-listed Ming Tombs, around 50km (31 miles) northwest from Beijing.

Set at the foot of Tianshou Mountain, you’ll find the underground tombs of 13 of the 16 emperors from the Ming dynasty, who ruled between 1368 and 1644. Only three of the mausoleums are open to the public, including the impressive Cháng Líng tomb, which shares architectural similarities with the Forbidden City.

You’ll arrive via the Spirit Way, a 7km-long (4.3-mile) road comprising palace gates, archways, ornamental pavilions, stone statues and the Great Palace Gate, a point where even emperors were required to dismount to enter.

How to get to the Ming Tombs from Beijing:

Bus 872 is the most direct way to reach the Ming Tombs (one hour), departing from the north side of Deshengmen Arrow Tower. By subway, you’ll take the Changping Line, and then it’s a further 30-minute walk or short taxi ride (¥20). A taxi from Beijing will cost about ¥300 return.

Don’t look down at the Shilinxia Glass Viewing Platform

When it comes to glass-bottom viewing platforms and skywalks, China can’t get enough. At last count there were some 2300 across the country – the more daring, precariously perched and futuristic looking, the better.

Located 70km (43 miles) from Beijing, the Shilinxia Glass Viewing Platform is no exception. This unique circular bridge juts out 32m (105ft) over – and 400m (1312ft) above – the Jingdong Stone Forest Gorge, like a UFO touching down on the clifftop. It’s an exhilarating way to take in the beautiful Shilinxia Scenic Area, which stretches out more than 12km (7.5 miles).

How to get to Shilinxia Glass Viewing Platform from Beijing:

Just a short jaunt across town will take you to the walled city of Wanping, which is popular for its multi-arched Marco Polo Bridge. Dating to 1189 and spanning 265m (869ft) over the Yonding River, it’s Beijing’s oldest bridge, lined with 485 decorative hand-carved stone lions. The bridge was named for the famed Italian explorer after he impressed during his Silk Road journeys, as detailed in the Travels of Marco Polo.

The bridge is also famous for a military clash between Chinese and Japanese soldiers in 1937, which incited the Second Sino-Japanese War; check out the nearby Museum of the War of Chinese People’s Resistance Against Japanese Aggression for the lowdown. Wanping is also notable for its 17th-century Ming-dynasty gate and 6m-high (20ft) walls that encircle the old town for 2km (1.2 miles).

How to get to Wanping from Beijing:

Until Wanpingcheng subway station is completed, take Line 14 to Dawoyao station. From there it’s a 1km (0.6-mile) walk to the East Gate of Wanping Town.

Escape to the country at Cuandixia

The perfect antidote to the frenetic pace of Beijing life is a lovely country escape to Cuandixia Village. Nestled in a valley 90km (56 miles) west of Beijing, it’s famed for its 500-year-old stone courtyard houses from the Qing and Ming dynasties, many of which have been converted into restaurants and inns. Set in a quaint atmosphere of cobblestone alleyways, it’s just the place to soak up the old-world charm.

How to get to Cuandixia from Beijing:

Take bus 22 from opposite Jin’anqiao station to reach Zhaitang; from there, it’s a short taxi to Cuandixia. Otherwise, expect to spend about ¥700 to ¥800 to hire a car from Beijing.