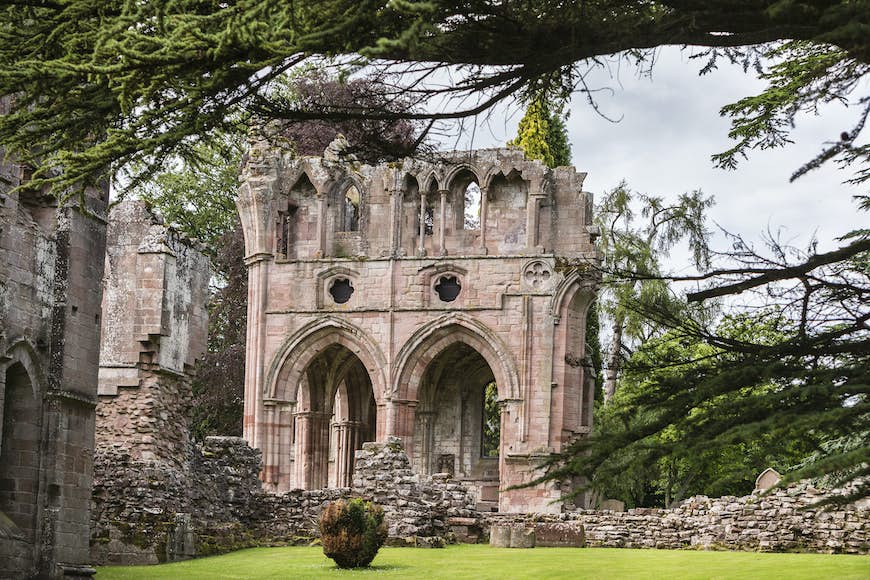 For serious lovers of Scotland, after arriving in the capital Edinburgh and before heading north into the Highlands — their sacred destination is the Borders, only one hour to the south.

This region is the least traveled part of the country, but it’s also one where storied castles, serene abbeys, sophisticated towns and salmon-stocked rivers are in ample supply. Equally, there are as many unanticipated pleasures and treasures here, and the search for the unexpected in the Borders helps make it a gripping destination, whether you’re a first-timer or regular visitor.

From the Tweed Valley to the North Sea coast, here are some of the best experiences in the Borders.

1. Walk in the footsteps of Sir Walter Scott

Polymath Sir Walter Scott was a historical novelist, essayist, poet, diplomat, archivist and treasure hunter, but he was also an intemperate advocate for the joys of travel in the Borders. In the early 19th-century, the Rob Roy and Ivanhoe author lived at Abbotsford House, a grand literary manor near Melrose, and it makes a great starting point for a tour of Scott Country.

The novelist indelibly left his mark in the surrounding valleys, so continue south to market town Kelso, which he once described as the most beautiful, if not the most romantic in the country. Alternatively, stay closer to Melrose for a classic half-day hill walk traversing the summits of the heathery Eildon Hills — Scott’s favorite viewpoint in Scotland. Then finally, pay your respects at graceful Dryburgh Abbey, where Sir Walter Scott’s Tomb remains tucked away in the northern transept.

The tremendous thrill of mountain biking in the Borders is brought home not just by the single-track climbs through gorgeous pine woodlands, but by the sweeping descents, log pile obstacles and white-knuckle jumps that make you question gravity.

The region is home to three of the country’s world-class “7stanes“ mountain biking centers, and each hotspot caters to a spectrum of riders, from anxious beginners to endurance pros. Both Glentress near Peebles and Innerleithen in the Tweed Valley are the flag bearers for the sport, with the most memorable downhill trails, family-friendly facilities and bike shops, while Newcastleton close to the border with England has the fewest crowds.

Local tip: For non-bikers, the birches and firs of Glentress are home to 25 miles of woodland walks, as well as live osprey cams. To see the birds of prey aflutter during nesting season, visit between May to September to learn about one of Scotland’s great rewilding stories — the raptor was hunted to extinction in 1916, but has since returned to successfully breed every summer.

3. Sleep in a castle like a laird or lady

Once owned by the Duke of Roxburghe, SCHLOSS Roxburghe is an extraordinary place to stay, with country sports galore across its 300-acre grounds — expect championship golf, horse riding, fly fishing, deer stalking and clay pigeon shooting. The Georgian country house manor is one of a handful of fairytale stays in the Borders (Thirlestane Castle in Lauder and Stobo Castle near Peebles are the others worth a look), but the German-owned bastion is the most prized because of its bejewelled intimacy and connections to local history and royal life. Currently, the conversation turns to the new marquee spa and extension which will open soon.

Local tip: To learn more about the current and 11th Duke of Roxburghe, pay a visit to nearby Floors Castle. Scotland’s largest inhabited castle, it’s a grandstanding fortress adorned with a Victorian walled garden, riverside trails and cafes. Inside, the Duke has opened up a huge swathe of his home for visitors — in particular, the sumptuous dining room exists in suspended animation.

4. Time travel to a 12th-century abbey

The Borders was once fought over by the Scots and English for centuries, with roads recast as invaders’ highways and churches and abbeys, ransacked, attacked and rebuilt. Nowadays, on the map, the region is crammed with ruined abbeys, while on the ground they carry stories of monks who once worshiped here for centuries.

Your first stop should be beautifully-preserved Melrose Abbey, the quintessential House of God and a popular pilgrimage spot for modern Scots because it’s the final resting place of the heart of warrior-poet Robert the Bruce. Elsewhere, Kelso Abbey was once home to one of Scotland’s largest and wealthiest religious paternities — spectacular architecture here is guaranteed — while Jedburgh Abbey throws up flourishes of Gothic and Romanesque architecture. To complete the circuit, finish almost back where you started at towering Dryburgh Abbey.

Detour: To see the four abbeys as a 12th-century pilgrim might have done, set off on the 68-mile Borders Abbey Way, which stretches a wrinkled timeline between the great holy houses.

Tweed, Scotland’s hard-wearing textile, was first invented on the banks of the River Tweed in Hawick and today this heritage and modern design converge in a deep reverence for the fabric. While the river and its many working mills are no longer the cause of this global fashion trend — everyone from Queen Elizabeth II and JFK to Sherlock Holmes to Coco Chanel once turned out in Tweed — the story of Hawick’s weavers and knitters continues apace today.

At heritage brand Lovat Mill, you can have your own Tweed tailored while you wait, while family-run Hawico, with stores from St Moritz to Tokyo, produces cashmere knitwear from the factory next to its flagship visitor center. Other clothing kingpins close at hand are luxury retailers William Lockie and Johnstons of Elgin.

The crags, coves and cliffs that interlock around the coastal headland of St Abb’s Head National Nature Reserve make it one of Britain’s most accessible bird-watching sites. Around you, colonies of guillemots, kittiwakes, razorbills and fulmars, hunt, feed and fly, while the landscape is prime territory for bracing clifftop walks; there are several vertiginous vantage points to watch the birds congregate and commute.

Planning tip: To see more than 10,000 birds nesting, visit from May to July. From late May, the reserve is also one of the best places to see sought-after puffin digging burrows along the wildflower-speckled clifftops.

Every day, when dawn breaks softly, catch-and-release fisherfolk can be seen picking among the stones of the River Tweed. Running from Dawyck in the far west to the North Sea coast at Berwick-upon-Tweed, the river is the lifeblood of the Borders and its nutrient-rich waters make it a Shangri-La for salmon.

In fact, more salmon are fly-fished in the Borders than anywhere else in Britain, and there is a thriving tourism industry, with salmon beats and fishing pools on almost every river bend. The season begins in February and finishes in late November, although permits are essential. For a helping hand, a raft of tour operators offer guided salmon fishing breaks and packages.

Local tip: If you hanker after a different close-up, head instead to the family-friendly Philiphaugh Salmon Viewing Centre near Selkirk to gawp at wild salmon leaping where the River Tweed meets Ettrick Water.

One of the most clear-sighted tourism projects for some time is The Great Tapestry of Scotland, an ambitious idea to depict Scotland’s 420-million year history through stitch and story.

Appropriately located in a new visitor center in Galashiels, once a powerhouse of mills producing eye-catching textiles, the collection of 160 panels explores the lives of historical figures, as well as stories of lesser known peoples and landscapes.

The idea was the brainchild of Edinburgh-based author Alexander McCall Smith and it took an army of 1,000 stitchers 50,000 hours to complete. Not only is the tapestry an artistic masterpiece, but the center is a hub for exhibitions of international craft and design.