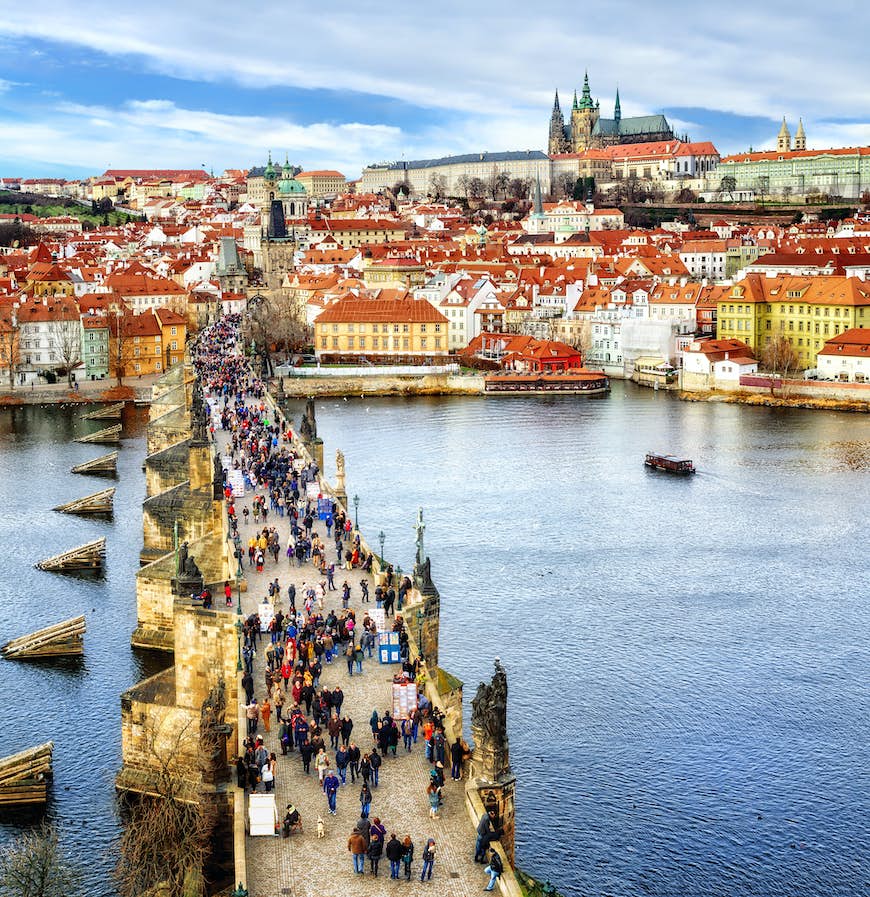 Most people kick off a visit to the Czech Republic in Prague, the cradle of Czech culture and one of Europe’s most intriguing capitals.

Famous for its Gothic architecture and the incredible Prague Castle, this is also a vibrant city with beer gardens, modern as well as traditional cafes, and a developing foodie scene. Start planning your trip with this guide to the very best things to do.

Whether you visit alone in the early morning mist or shoulder your way through the afternoon throngs, crossing Charles Bridge is a quintessential Prague experience. Constructed in 1357, this picturesque bridge connects the Old Town and the Lesser Quarter. Local legend says eggs were used to create the mortar for its construction holding its 16 elegant arches together for 500-plus years. Climbing the bridge tower on the Old Town side provides a bird’s-eye view of this intricate bridge with the Prague Castle rising above it in the background.

2. Recharge at a traditional coffeehouse

Prague has become a haven for specialty coffee lovers. Slow drip, nitro brew, chemex – coffee fans have all bases covered. The popular Vinohrady district contains the highest concentration of contemporary cafes, but you’ll find good coffee all over the city.

However, you may be more interested in experiencing the charm of days gone by, at one of Prague’s more traditional coffeehouses. Grand Cafe Orient, located in a stunning cubist building near the Old Town Square. Café Imperial, brings you back to the time of the First Republic. And Kavárna Slavia, once a popular hangout spot of the late Czech president Václav Havel, has a professional pianist playing live every evening from 5pm.

More than 1000 years of history is cradled within the walls of Prague’s hilltop castle, a complex of churches, towers, halls and palaces that is almost like a village in its own right. This Unesco World Heritage-listed site is the cultural and historical heart of Czechia – a huge store for collections of physical treasures as well as having served as the backdrop for many significant historic events such as the election of Václav Havel as president in 1989 and the coronations of the kings of Bohemia. The jewel in the crown, St Vitus Cathedral is a magnificent display of Gothic architecture.

Baroque structures are plentiful in Prague, especially in the Lesser Quarter area. The St Nicolas Church is a fine example. With rich frescoes decorating its walls and its large green dome, this cathedral represents one of the grandest Baroque displays found in Central Europe.

The era of Cubism may have been short-lived, but Prague found a special affinity for this style. The angled lines of Prague Cubism can be studied at the House of the Black Madonna in the Old Town, featuring a small Museum of Czech Cubism, as well as the cubist-designed Grand Cafe Orient.

Prague’s masterpiece Astronomical Clock was first constructed in medieval times: it’s the world’s oldest functioning clock. At the top of every hour, 12 mechanical apostles parade between small doorways above the face of the clock. Crowds of visitors start to gather hourly to watch as the playful spectacle unfolds.

Local Tip: While everyone is focused on the spectacle, this is also a time to be mindful of the potential for pick-pockets.

By hearty we mean Czech classics such as svíčková (sirloin beef and bread dumplings generously topped with a creamy sauce), vepřo knedlo zelo (roasted pork with sauerkraut and bread dumplings), fried cheese, and a few widely adopted staples from neighboring countries, like goulash and schnitzel. These traditional meals can be tasted at a local chain of pubs called Lokál, which serves dishes prepared so well that they would please even the most finicky Czech elders. Don’t forget to wash it all down with a crisp beer to aid your digestion like a Pilsner Urquell, a Prague-brewed Staropramen, or a malty dark Velkopopovický kozel.

Local Tip: Smaller breweries have taken Prague by storm too. A local’s favorite, the Dva Kohouti (Two Roosters) mini-brewery is located in the once-industrial-now-hipster neighborhood of Karlín.

7. Chill by the river at Náplavka

On sunny afternoons you’ll find many Czechs relaxing along the Náplavka riverbank area. It’s lined with barges selling refreshments, from classic sausages to beers and cocktails – both day and night. At sunset it’s an especially gorgeous spot to hang out in Prague. If you want to do it in the Czech style, take a bottle of wine, a couple of fellow travelers and a blanket to sit on. Dangle your feet over the water watching the swans and ducks float by.

Planning Tip: On Saturdays the farmers market is another great time to visit, with organic produce, fresh bakery items and live music.

8. Ride the funicular to Petřín

Not the Eiffel Tower, but the lookalike structure on Prague’s horizon is a steel observation tower called the Petřín tower, atop Petřín hill. If you fancy a workout, you’ll enjoy the walk up Petřín hill with plenty of spots to stop and admire the beautiful views of Prague. The other, softer option is to ride a small funicular to the top. As it’s part of the Prague transportation system, you can use the same tickets for the funicular as you do for the trams and the metro.

Planning Tip: Once you’ve reached the top of the hill, climbing the actual Petřín tower can be quite vertigo-inducing. If you’re up for the challenge, you’ll be rewarded by marvelous views.

9. Unwind in one of Prague’s lush parks and hiking spots

Prague is home to many green spaces, with plenty of shaded resting areas. Plus beer gardens are a big pull, especially in the heat of summer. Hilly parks such as the one in Letná or Riegrovy Sady also offer views over the city.

If you crave a wilder nature escape, Prague has some fantastic hiking opportunities just a stone’s throw away from the city center. One of the most popular hiking getaways for Prague locals is the Prokopské údolí valley, featuring winding trails through forests and meadows. Divoká Šárka is another great, wilder area to explore with creeks and marshes.

These two neo-Gothic spires part of the defining shape of Prague’s skyline belong to the Basilica of Saint Peter and Paul, perched atop the Vyšehrad hill. The historic fort of Vyšehrad was built during the 10th century and became the seat of the first Czech ruler, King Vratislav II of the Přemyslid dynasty, a century later.

A walk through the adjacent grandiose cemetery, will take you past the final resting place of many famous Czechs, such as the composers Bedřich Smetana and Antonín Dvořák, as well as the renowned writers Karel Čapek and Jan Neruda.