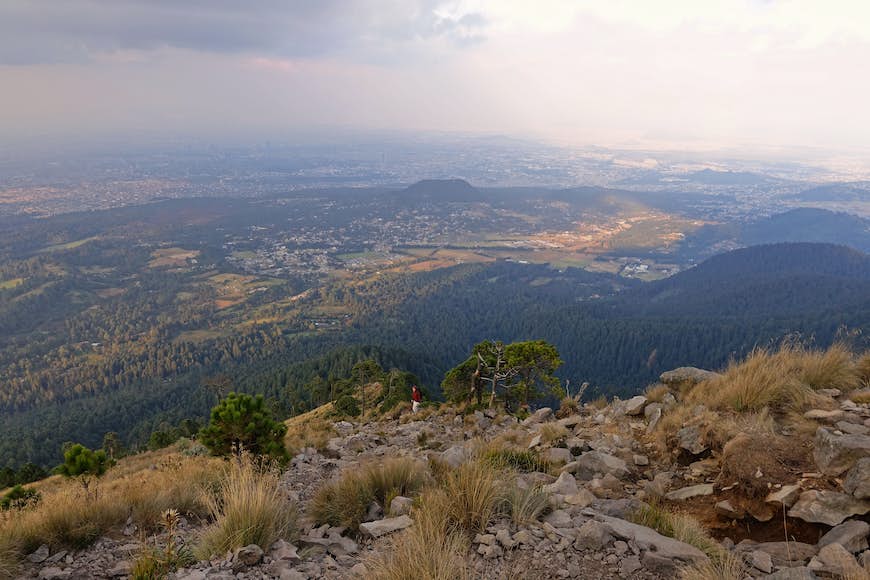 Home to tropical beaches, pre-Columbian ruins and some of the world’s most celebrated cooking, Mexico has long captivated visitors. Its hiking trails, however, remain little known, which is great news for those eager to experience the nation’s diverse scenery without the crowds.

Mexico’s trails can take you through astonishing landscapes, from newly formed lava fields to jaw-dropping canyons, as well as cloud forests teeming with wildlife. Experienced mountaineers can plan a trip around the country’s famous mountains, like the challenging ascent up 18,491ft (5636m) Pico de Orizaba, Mexico’s highest peak.

Hiking here isn’t just about the panoramic backdrops, though. You can also head off on a trek through local communities, with indigenous guides shedding insight on the rich cultures that date back many centuries. Here are our picks for the top hikes in Mexico.

Less than 25 miles (40km) south of Mexico City, the Parque Nacional Cumbres del Ajusco immerses you in a world of forested slopes and rocky peaks that seem a world removed from the bustling capital. The challenging but rewarding climb to the top of Pico del Águila will take you through forests of oaks, firs and pines up to alpine terrain where the views over the rolling valleys and the distant metropolis grow more dramatic with every step.

Although the hike is relatively short, the going is steep as you ascend more than 2200ft (671m) en route to the lofty summit, which sits at 12,795ft (3900m) above sea level. Along the way, keep an eye out for the teporingo, aka the volcano rabbit, a rare lagomorph and one of the smallest rabbit species on earth (only the pygmy rabbit is smaller). The trail begins near El Abrevadero restaurant, a great place to treat yourself to a meal after completing the hike.

Most of earth’s geologic wonders can be measured in eons, but Volcán Paricutín has been around for barely 80 years. Back in 1943, a farmer was plowing his fields in the southwestern state of Michoacán when rumbling started, and steam, ash and lava spurted from the ground. Seemingly out of nowhere, Paricutín volcano rose out of the bowels of the earth, growing over the next decade to around 1350ft (411m) above the surrounding valley.

Today, the large black cone is mostly dormant, which you can see firsthand on a walk from the village of Angahuan. From there you can hire a guide from the Purépecha community and set out across lava fields, trekking past the ruins of the Church of San Juan Parangaricutiro with its battered belfry towering above blackened volcanic rock. Later, you’ll scramble up loose rock and gravel to the summit of the youthful volcano, spying a few steam vents that are the only signs of its activity.

The Copper Canyon in the north of Mexico isn’t one great expanse, but rather a system of six separate canyons that are larger and deeper in places than the Grand Canyon. The rugged mountainous terrain is also home to the Rarámuri (Taramuri), an indigenous group known for their long-distance running traditions.

You can experience jaw-dropping panoramas of the Sierra Madre while also learning about Rarámuri culture on a guided hike along the Bacajipare Trail. Led by Rarámuri members, this memorable walk takes you along an ancient path past remote homesteads and down to the small Bacajipare community.

This is just one of several hikes you can undertake that is led by Experiencias Rarámuri, a sustainable community tourism project that’s been around since 2015. Contact the guides in advance or find them at the lower cable car station inside the Parque de Aventura Barrancas del Cobre. Before or after a hike, be sure to ride the high-flying zip lines over the canyon – another spectacular way to experience this region.

Near the center of Oaxaca state, eight remote villages are linked by some 62 miles (100km) of high-country trails in one of Mexico’s best ecotourism projects. You can plan a wide range of hikes here, from half-day excursions to multi-day treks,  overnighting in Zapotec villages along the way. Highlights include walking through misty cloud forests, crossing suspension bridges over ravines and scampering up rocky cliffs to views of snow-capped Pico Orizaba.

The community-run Expediciones Sierra Norte based in Oaxaca City can help with planning and logistics. Among other things, they can set you up with English-speaking guides, additional activities like horse and bike rentals and reserve your lodging in advance.

The mines of San Luís Potosí showered riches on boom towns like Real de Catorce. When the price of silver went bust in the early 20th century, cobblestone centers turned into pueblos fantasmas (ghost towns) and the population pulled up stakes and moved elsewhere. In recent years, boutique hotels and restaurants have breathed new life into Real de Catorce, though it still retains ghostly elements of its once-grand past.

With its population hovering around 1000, the small city makes a great base for hikes to abandoned sites, including a hilltop ghost town hidden in the desert landscape. Along the way, you’ll ascend more than 850ft (259m) and enjoy sweeping views back toward Real de Catorce and the surrounding mountains stretching off toward the horizon. Once inside the pueblo fantasma, you can explore eerie 200-year-old houses and peek inside open mine shafts (watch your step).

Surrounded by dozens of traditional Tsotzil and Tzeltal villages, San Cristóbal de las Casas in Chiapas is at the heart of one of the most deeply rooted indigenous areas in Mexico. No matter where you walk, you’ll encounter residents with obvious pride in their Mayan ancestry. The forests and mountains here are considered sacred—none perhaps more so than the Cerro Don Lauro, a craggy, pine-covered mountain looming above San Cristóbal.

An uphill hike takes you through pine and oak forest, past trickling streams and small community farms. As you near the top, you’ll pass an oversized drum, an altar and an area for temazcal (sweat lodge) ceremonies. This is where Chiapaneco shaman Don Lauro, for whom the peak is named, leads workshops and ceremonies in honor of the mountain. (Learn more about him in the film El Hombre de la Montaña.) At the summit, you’ll enjoy a mesmerizing expanse of San Cristóbal, fringed by lush peaks rising above the valley floor.