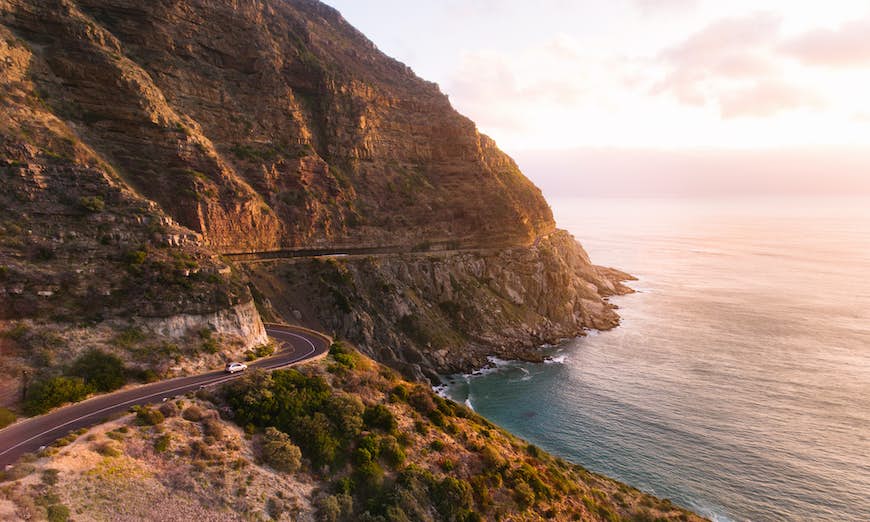 Cape Town climbs the slopes of Table Mountain, spreads down the Cape Peninsula, and sprawls across the surrounding flatlands, making it a large city to get around. The city center is reasonably compact and navigable on foot, but many highlights lie outside its limits.

The best forms of transport are hire car, Uber, and MyCiTi buses. Unfortunately, Cape Town has a high crime rate but it’s easy to stay safe if you follow a few simple rules.

Copy the locals and drive

The safest way to travel is by car, allowing you to road trip through the scenic Cape Town area too. The region has a good road system, with South Africans driving on the left, and hiring a vehicle from the likes of AroundAboutCars is affordable.

Parking is readily available and you’ll likely encounter car guards, who you should tip around R5 for watching your vehicle.

Drivers have to be confident and alert, as locals are often aggressive and erratic behind the wheel. Cape Town has a notorious rush hour, from around 7am to 9am and 4pm to 6.30pm.

Major car hire companies have desks at the airport and offices in town, offering everything from 4WD vehicles to motorbikes, although the latter is only recommended for experienced riders.

Tip for driving around town: When it comes to driving, the primary local idiosyncrasy is the four-way stops at junctions. These operate on a first-come, first-served basis.

Relax in an Uber

Uber is a popular option, but you may prefer an UberX to the cheaper Uber Go options, which are sometimes odorous and barely roadworthy.

Taxis wait around the city center, including hotels and backpacker hostels, although fares are likely to be higher from popular tourist spots such as the V&A Waterfront. If a taxi has a meter, ask the driver to use it, as this will likely be cheaper than agreeing on a fare in advance.

Negotiating a price for the duration of your stay is a convenient option, giving you both wheels by day and a designated driver by night.

Tip for taking taxis: As with most forms of transport in Cape Town, it’s better to avoid traveling in a taxi alone after dark.

Cape Town’s two main bus networks are Golden Arrow, which has been in operation here for 160 years and serves the poorer neighborhoods in the Cape Flats, and the modern bus fleet owned by MyCiTi.

A good option for traveling around the city center and Atlantic suburbs, the MyCiTi’s more modern buses cover the center up to Gardens and out to the Waterfront; along the Atlantic seaboard to Camps Bay and Hout Bay; up to Tamboerskloof along Kloof Nek Rd, with a shuttle service to the cableway; to Woodstock and Salt River; to Bloubergstrand and Table View; to Khayelitsha; and to the airport.

Tip for catching MyCiTi buses: Fares have to be paid with a stored-value “myconnect” card (a non-refundable R35), purchased from station kiosks and participating retailers.

Tour the sights by bike

If you’re prepared for the many hills and long distances between sights, the Cape Peninsula is a terrific place to explore by bicycle. Dedicated cycle lanes include one running north towards Table View, and another alongside the Walk of Remembrance from Cape Town Railway Station to Green Point.

However, Cape Town’s inconsiderate drivers can be liabilities. Bicycles are also banned from suburban trains (although allowed on MyCiTi buses). There are bike-hire outfits around town, while Up Cycles allows you to pedal one way between its Sea Point, V&A Waterfront, and Camps Bay stations.

Walking is a wonderful way to see the city center by day, with lots of shops and street life. Note that motorists often don’t stop at pedestrian crossings, and catching a taxi is a safer option after dark.

Take the train to Simon’s Town

Metrorail trains are generally regarded as unreliable and unsafe, with pickpocketing, muggings, and poorly-maintained station well reported in the local media. There’s one exception: the Southern Line between central Cape Town Railway Station and Simon’s Town, which crosses the middle-class Southern Suburbs and skirts False Bay. This can be an enjoyable excursion, especially traveling with a group, but it’s not recommended as a regular mode of transport.

New trains have been added to the network, but unfortunately many are still dilapidated. Where possible, try to travel in MetroPlus (first class) carriages: buy your ticket at the station before boarding the train.

See the peninsula by boat

Ride with the locals in a minibus taxi

Shared minibus taxis dart around town, carrying locals between the Cape Flats and the city center. These rickety white minibusses are usually overcrowded (in other words: dangerous), and there is fierce competition between rival firms. Some are driven with little regard for traffic lights (“robots”) and therefore passenger safety.

While minibus taxis aren’t a safe option on the open road, these omnipresent vehicles can be a convenient and characterful way of traveling short distances in the city center. Locals from all neighborhoods use them as a cheap form of public transport.

The taxis frequently stop to drop off and pick up passengers; hail one and ask the driver or conductor where they’re going. The fare should be negligible; give it to the passenger in front of you, who will pass it forward, with your change returning in the same manner. Take coins and R10 or R20 notes, as the driver may not be able to break R100 or R200.

Tip for using minibus taxis: Taxi ranks are often located next to train stations, such as the main rank on the upper deck of Cape Town Railway Station.

Apart from hire cars and tour companies, the best option for people living with a disability is MyCiTi, which has facilities including boarding bridges on buses. Visit the Lonely Planet accessible travel resource page for more information.